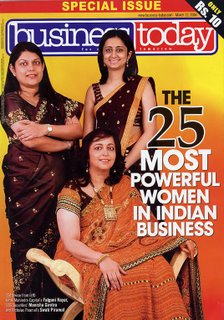 Business Today magazine has pubished its annual list of 25 most powerful women in Indian business. Rather than individual names, the trends thrown up by the listing are interesting:

1) 14 of the 25 women featured are between 41-50
Says Swati Piramal,"Women typically peak after the age of 40 because they lose time in bringing up children."

Many of the high flying corporate women I spoke with last year for a Businessworld cover story on women managers echoed the same sentiment. While there were some who managed to have kids and get back to work with no interruption to their careers, others did take a break or slow down for a couple of years. But they had no regrets or sense of 'loss'.

Because whether you become a CEO at 37 or 43 does not really make a difference.

Yes, ICICI Bank contributes 4 out of the 25 (5 if you count ICICI Pru Life), but clearly women are making a mark in banking. There are a few other names which I think could have made the list but perhaps BT wanted to give representation to more industries.

Interestingly, Media, Entertainment and Advertising - which are perceived as being sectors where women dominate/ are very visible/ 'have lots of opportunity' - actually account for just 4 out of the 25.

Look more closely and 8 of the women in banking are MBAs while 2 are from Delhi School of Economics (Renu Karnad of HDFC and Manisha Girotra of UBS). Kalpana Morparia is the only non-MBA, non-eco grad (she holds a law degree and had joined the bank's legal dept back in 1975).

While these statistics do not mean that all women MBAs who enter finance will scale heights, they do point to an environment which is more enabling and offers more equality of opportunity than industries like consulting or marketing.

Is this becoming an influencing factor in the kind of career women graduating from b school are choosing? I'd certainly like to know from some of you!

If image is everything...

Here is a statistic which the magazine did not compile but which I did: 15 of the 25 women featured are wearing saris. That includes all the women in banking except for J P Morgan's Vedika Bhandarkar in salwar kameez. 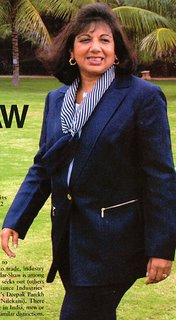 The only two women who have chosen distinctly Western clothing are Pepsi's Punita Lal who appears in semi casual and Kiran Mazumdar Shaw who is photographed in a proper business suit in the 5 page spread devoted to her.

I have nothing against the sari - it is a very elegant dress. However, fewer and fewer women below 35 are opting to wear saris to work on a daily basis.

So I wonder if, say 5 years from now, 60% of the women on the BT list would be seen in saris. And if not, would they opt for salwar kameezes or Western style business suits? And if salwar kameez will it be the traditional style, dupatta et al or something more on Indo-Western lines??

Meanwhile brands like Allen Solly have launched women's Western wear formals and these are becoming popular with younger women.

But a well designed range of no-fuss salwar kameezes (less ornate and flowy) could give Western formals a run for its money. It's more comfortable - and suited to the average Indian woman's less-than-perfect body shape.

I know there are brands like W but we need more.

A couple of observations
If you are asked to pose for the cover of Business Today magazine, would you choose to wear the kind of clothes you regularly wear to work (printed or plain sari with border), or 'dress up' (sari with embroidery etc)?

This time, all 3 of the amazing women on the BT cover kind of looked like they were ready to leave for a party. Personally, I think they look far more elegant in the more sober clothes they have been photographed in, inside the magazine.

However one could argue the flamboyance on display just shows that they are secure enough to show off their feminine side. But yeah, quite different from Naina Lal or the ICICI women who (after years of gracing these covers) make way for a new set of faces.

Speaking of which, there are apparently 8 new names on BT's list. Which is great but as a reader you can't help wondering how these additions and deletions are made...

I mean sure, it's a 'subjective' list ( based on 'informal polling of consultants, headhunters, analysts, know-it-all corporate types' - says the magazine). But a small 'kahan gaye woh log' section might be of help in putting the disappeared names into perspective.

For example, Hema Ravichander quit as HR head of Infosys to become an independent consultant. But what happened to some of the others? Did their companies go downhill, or did the editor just say, "Yaar wahi chehre dekh dekh kar bore ho gaye hain."

Either of which I guess is a valid enough reason...

With International Women's Day approaching, you will see and hear more of these women soon. But as Britannia CEO Vinita Bali said to BT, after visiting villages around Muzaffarnagar in UP where she saw as many girls enrolled in school as boys,"You can talk about women in powerful positons in business but the real changes are things like this, which didn't happen 50 years ago."

P.S. All pics used here for purpose of illustration only - they are copyright Business Today. I would gladly link to their website but it happens to be password protected.
Posted by Rashmi Bansal at 4:23:00 PM