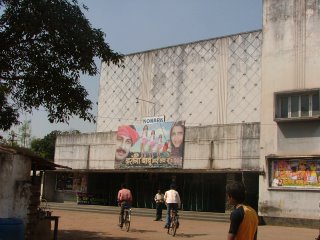 Every city, every town, every gali, koocha, mohalla has some new experience to offer. And that's how I found myself in Konark theatre in Rourkela, watching my first (and most likely last!) bhojpuri film: 'Daroga babu, I love you'.

Actually, it was Fate that dragged me in. I was merely taking a pic of the poster - which was quite fascinating in itself. I mean where would you find a poster which mentions credits for nirdeshan (direction), sangeet (music) and 'maar dhaad' (I guess they mean action sequences but note the literal meaning!)!

Anyhow, the manager noticed me and struck up a conversation. "Accha, aap Bombay se hain?" He too had a brother in Sion Koliwada, in the 'film line'.

Then, he said, "Aaiye na, dekhiye...". And I found myself walking up to the balcony, where he assured me 'ladies log bhi hain'. Yeah right!

The movie had started. An old lady was praying to a tulsi plant - asking for God to give her son a good naukri. Enter son: Maa hamaar naukri mil gavat (subtitle: I have got a job!).

A few push ups and running races later, son acquires a vardi. Camera focuses on his badge and then cap and then he puts on the most important accessory: a pair of dark glasses.

Next scene: villain is introduced. A man with a 'Mangal Pandey' moustache sticks a stainless steel sword into some random villager's stomach. Bright red 'blood' drips from the instrument which appears to be longer than the line at the Food Bazaar check out counter on a Sunday.

Next scene: heroine is introduced. Daroga babu alights from a bus, only to collide with girl on a scooter. The usual pleasantries are exchanged. Girl calls him 'goonda, badmaash - dekh kar nahin chal sakte kya?" Hero is already naming their children.

Cut: Daroga babu enters the police station. Here, he has two bumbling assistants called 'Loncha' and 'Kharoncha'. A nubile nymphet arrives at the police station to deliver lunch to her bapu. The real purpose of her existence is to bung in an item number.

At this point I sneaked out of the theatre and into the sunshine. And I couldn't help but wonder, "In the India of 2006, why would such pea-brained, predictable, poorly made films have a market?"

Bhojpuri on a roll
Well, they do - and a big one. Trade analyst Taran Adarsh says , "Most Bhojpuri films are made in small budgets, usually Rs 20-30 lakh, and they fetch Rs 1-2 crore."Several of these films are grossing 10 times their production costs. A good film can even make a profit of Rs 10-12 crore..."

The hero of this film, I have learned, is one 'Manoj'.

In 2005, Manoj, a struggling singer, debuted in sex comedy Sasura Bada Paisewala. The film ran for more than 50 weeks in Varanasi and Kanpur in UP and for 25 weeks elsewhere. Sasura... made with a modest budget of Rs 30 lakh, grossed a stupendous Rs 15 crore. Manoj’s other films such as 'Daroga Babu I Love You' then went on to do a business of Rs 4 crore and 'Bandhan Tutey Na' has already made Rs 3 crore.

Now Manoj would never ever make it as a Hindi film hero. He is just too ugly. But that, I guess is part of his charm. He is the kind of guy your taxi driver in Mumbai or factory worker in Ludhiana could look at and say, "This could be me".

The women, in contrast, can be called 'pretty'. At least they have no spare rolls of fat jiggling around. And they use 'Fair and Lovely'. So the ugly hero gets the soni kudi. Excellent form of escapism.

The world depicted in 'Daroga babu' is completely alien to you and me. Which is why it probably appeals to the target audience. In a world where everything is in flux, maybe the 'formula film' offers comfort to migrant Bihari labourers who appear to be the primary target audience.

Greatbong puts it superbly in a post on the same subject."This was bound to happen with Bollywood totally losing its touch with the Hindi heartland and instead catering to the multiplex-going city slickers.

Who really cares about 3 friends who go to Goa in a Mercedes and "break up", like girlie men, on some trivial issue? Not someone who has spent the whole day walking in knee-deep dung in a cowshack."

Fine - but this is what I don't get. Manoj recently declared,"Gone are double-meaning dialogues, lack of a coherent storyline and poor technical quality. The films are slicker...".

Er, if this is slick, I wonder what Bhojpuri films used to be like earlier! The point however is that 'upgrading' too much Bhojpuri films makes no sense. As actor Ravi Kishen puts it, "Bhojpuri cinema is like home-cooked food".

If the sets and actors and locales improve too much - will it be any different from their 5 star cousins - the Bollywood film industry? Except for the language, that is. And Bhojpuri is really more like a dialect of Hindi, rather than a complete bhasha in itself.

And once costs go up - with actors dancing in Switzerland instead of random maidans and mountains - will it remain as profitable a proposition?

Bhojpuri vs Bunty
A recent BBC article noted that Bhojpuri films are beating Bollywood releases in the Hindi heartland. "Both (Daroga Babu and Sasura Bada...) did more business in Bihar and Uttar Pradesh than the A-list Bollywood releases, Bunty Aur Babli, a version of Bonnie and Clyde, and Mangal Pandey - The Rising, about the 1857 Indian mutiny".

Sure. But the fact is in towns like Rourkela there is no 'family crowd' at the dilapidated, paan stained, A/C-less theatres. Where stall tickets sell at an amazing 10 bucks and balcony for a princely 15.

So the potential theatre audience for 'Bunty aur Babli' in buntyandbabli towns was quite limited. Here, 'decent' people watch movies on CDs or wait for the cable wallah to show them.

There are no plans to upgrade 'Konark' - the manager does not think there is a market for a better theatre with pricier tickets. And perhaps he's right. If the girls at NIT wish to see Rang de Basanti, they'll have to do it in Calcutta or Bhubaneshwar...

Meanwhile, Bhojpuri films with evil zamindars, daroga babus and gaon ki goris continue to be a great business proposition. And a reminder that all is not candyfloss and Chopragloss in this, our wide and varied country called India.
Posted by Rashmi Bansal at 6:38:00 PM