With 0-5 years experience, working in India (preferably Mumbai). Would like to interview you for a segment on why i-banking is hot, for UTVi's 'Cracking Careers'.

We're looking for both MBAs and those who's joined i-banks right after graduation, as analysts.

Also looking for anyone who's done a part-time MBA within the last 3 years (or is still doing one). Again, I'd like your opinion and feedback on the value add from the course.

As always, you can drop me a line with your contact no at rashmi_b at yahoo.com

Sorry for the interruption, travelogue continues, with the next post.
Posted by Rashmi Bansal at 12:32:00 PM 17 comments:

It felt good, this journey

Sometimes there is so much to say you don't know where to begin. So let me start with the most basic question: "Why?

Why did I visit Badrinath-Kedarnath?

When a friend posed this question, it struck me that no one asks why you are going to Manali, or Sri Lanka or Sun City. That, you see, is a holiday.

But Badrinath and Kedarnath, despite their spectacular locations, are not holiday spots. Getting there, even in this modern age, requires a fair bit of commitment and hardship. There are only two reasons to make the trip:

1) As a tag along. Sab ja rahe hain, to chalo hum bhi
And yes, this was part of the reason. With 14 of us on board our very own Garwhal Mandal Vikas Nigam bus, armed with enough matharis, laddoos and achar to last weeks, it did feel like a picnic.

But there is a second, more important reason which made the sometimes long and endlessly bumpy ride in that bus where seats never reclined worth it. And that is reason number two.

2) Because I believe.
I believe there is a Higher Power out there. You can call it God, or a Force, a Universal Energy.

The first time I visited Rishikesh last year, I felt its Presence. And right then I said to myself, I want to come back again, and go further up into the mountains.

And so it came to be.

I wanted to make this journey, this yatra as we call it, to thank God for all the wonderful people in my life and the experiences and achievements I have had so far.

I never felt the need to do this before.

I have visited many, many temples, as a reluctant tag along. When I was 11, my parents took us on a 21 day trip of south India which basically involved visiting a series of temples. All I remember is we had some very tasty guavas on the way to Tirupati. And that eight of us (six adults and two kids) would somehow fit into a single Ambassador.

The only place I really liked on that trip was Bangalore.

In 1986, I visited Vaishno Devi. It was the anticlimax to a lovely 'LTC' holiday in Kashmir. We actually walked all the way up and back and I still remember the ice cold water you have to wade through to have darshan.

But it was a chore. I could not figure out why people were so enthusiastic about the journey. How so many old people, small kids, women with babies - many of them barefoot - made it there with a smile in their eyes and a song on their lips.

I know now, it is faith. Theirs was an unquestioning faith, mine I arrived at after much rejection, deliberation, contemplation and cross examination.

It does not matter - we are all fellow travellers, on a common journey.

So am I religious? Not really. But I do appreciate Hinduism - as a philosophy and a way of life - far more today.

Enough said, on with the journey....

Pilgrim's Progress - 1
We are at Sonprayag, waiting to be released towards Gaurikund. The 'base camp' from where you make the trek up to Kedarnath. It is a narrow one way stretch. Badly managed, long line of vehicles. Still, you are grateful to be here in this bus. Imagine in earlier times the days and months pilgrims took to make it on foot, even till here.

We left Rishikesh the previous morning, at 6 am. Close to 12 hours later we were in Guptkashi, where we stayed the night. Sonprayag is an hour from here.

The bus finally gets the green signal. We chug along the girlishly giggling Mandakini river. The greenery is lush, dense, pristine despite human presence.

Except for plastic debris, kahin kahin. 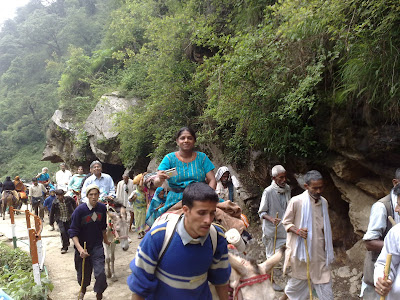 At Gaurikund the scene is chaotic. It's a 14 km trek upto Kedarnath, and a fairly steep ascent upto 12,000 feet. The rasta, rudimentary. You have two choices:
a) Walk
b) Take a horse

Those who are too young, old or infirm for the horse have the option of a 'palkhi' (a chair carried up by four brave young men) or a 'pitthu' (a cane chair carried by a single person).

Some of us chose to walk. We did about 5 kms but then succumbed to the lure of the horse. By this time it was raining.

Cheap plastic raincoats on sale, all the way, along with tea, coffee, Kurkure and Maggi.

As you hang on to the beast you reflect on what it must feel like to carry your burden. And the young men who lead these horses up and down twice a day, and yet have a smile on their faces.

As we ascend it gets colder, hazier, and the rain is now incessant. Finally, we are there.

Kedarnath is a very ancient temple. Legend has it that it was first established by the Pandavas. In fact it is the only temple I have ever seen or heard of which actually has idols of the Pandavas (the 5 brothers, Kunti, Draupadi and Krishna). Although these are not actually worshipped. 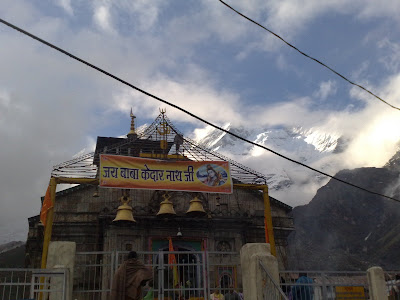 When the clouds clear up, we see the most spectacular snow-covered Himalayan mountain range. Not far far away but almost like you could walk an hour and get there (an illusion, but nevertheless).

Behind the temple is the path that the Pandavas are believed to have taken at the end of their life, the Indian version of 'stairway to heaven'. You even see the same black dogs around here that they say followed the Pandavas on their ascent towards swarg.

The present day temple was established by Adi Shankaracharya in the 8th century AD. And thankfully not much has been done to 'modernise' it.

The one difference between then and now I guess is the fact that if you are willing to pay, you can get a more exclusive darshan at a pre-fixed timing. And well, we took that option and took an 'appointment' for 1 am.

You still end up standing in line for at least half an hour, feeling oxygen deprived. But you spend a little more time in the inner sanctum.

The moment I entered it, I felt something. A vibration, or an energy, or what - I do not know. But it was incredible. It was uplifting, and yet humbling at the same time.

I closed my eyes, so I could feel it, connect with it, be one with it. I knew WHY I had made this journey, I felt a secret of some kind has been revealed.

My mother poked me, wanting me to participate in pouring the ghee and rice and other pooja activity.

The cold air outside was exhilrating. There was no electricity all night at the dingy hotel we stayed in. Horrible food and no hot water. But it did not matter. 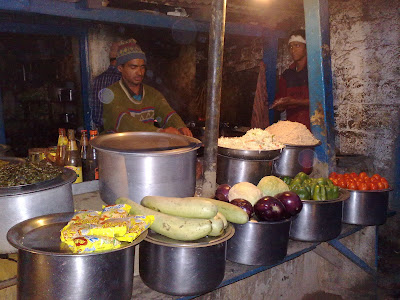 We enjoyed a really nice breakfast at a local dhaba (aloo parathas the size of frisbees!) and made our way back down.

I think I will make a trip back here someday - but next time on foot.

Oh by the way, there is also the option of helicopter. It costs Rs 8000. I wonder though, if it feels as good to get there without any struggle.

There are some things money can buy, for everything else there's faith.

Back to work (sort of)

So much to say about my trip.
Will put my thoughts together and update you soon.

Meanwhile I'm looking for a young architect or architecture student to interview. Drop me a line at rashmi_b at yahoo.com.
Posted by Rashmi Bansal at 12:35:00 AM 12 comments:

On vacation (kind of)

At the beginning of this year I mentioned I wanted to go on a char dham yatra and it's happening! Well, char nahin par do to jaa rahe hain. And what a trip it's going to be!!

My extended family - some 14 of us - are going to Badrinath and Kedarnath. It feels like one huge picnic.

So no updates here for a week (even if the Reliance data card works). Nahin to vacation hi nahin hoga.

Be a case study on 'Cracking Careers'

I'm looking for folks with the following profiles to feature on 'Cracking Careers', the careers show on business news channel UTVi.

* A young HR manager and students of HR

* Anyone who's done or is currently doing an MBA (Retail)

* A CA who has done an MBA and thinks it's helped in his/ her careers. And someone who has done a CA but does not think MBA is necessary.

Drop me a line at rashmi_b at yahoo.com and I'll explain to you what it's all about. We would basically chat with you and then come down and shoot with you. Your experience/ opinions would be seen on national television.

Besides this, any of you who have faced a career dilemma and successfully solved it, or simply have an interesting job or vocation - do get in touch as well. I am specifically looking for:

* Hotel management graduates, esp pastry chefs and anyone who's started a catering business

* Anyone in the social work sphere.