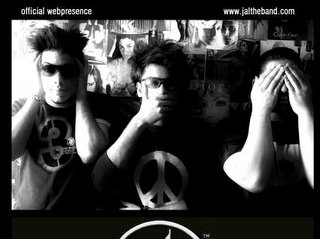 A band has a couple of hit songs. It decided to quickly 'cash in' by giving a bunch of concerts. Now this never really happened in India, until now. What's more it's Pakistani band 'Jal' that's leading the way.

It began with 'Woh lamhe' setting the charts on fire. Then came Aadat, and Jal became more than a one-hit wonder. Next thing you know, the band is on a blistering schedule of concerts all over India. 20 performances in 25 days flat - in the current month.

So far, so good. The trouble is, the band is making a huge mess of it. As they airdash from Delhi (3 Feb) to Bangalore (4 Feb) to Rourkela (5 Feb) - the same feedback echoes from across venues. Jal is a disaster. The band is simply unable to hold - let alone enthuse - the crowd.

Delayed, lacking energy and spunk, poor choice of songs, poor singing contributed in making the first half i.e the Jal half of the show worth not even the cheap entry fees that were being charged.
- report from IIM Bangalore festival, Unmaad (4 Feb)

An identical scenario was replayed at NIT Rourkela the next day. The band arrived 4 hours behind schedule to start the concert scheduled for 9 pm at 1 am! The 3000 strong crowd was somehow held together with the NIT band 'Euphony' putting up an unscheduled performance. The crowd grew restless and angry, hungry and cold.

And yet, when Jal finally arrived, the crowd stood up and roared - forgetting about those frozen fingers and toes. All was forgiven, as junta swayed to 'Woh lamhe'. And then, the trouble began.

The band sang some of the other, relatively unknown songs from their album. Slow ballads, all sounding the same. Smart alecs called for the 'Taansens' to stop their torture. Many in the audience got up and left - after all, they'd heard the one song that really mattered.

Sadly, at this point a fuse blew out and so did my patience. I too left the venue.

Deliver or else...
A much anticipated show turned out to be a huge letdown. And I think Jal is squarely to blame.

First of all, professioanlism demands that the band arrive on time. That you were in Bangalore the night before is not an acceptable excuse. Don't commit, if you can't manage the logistics.

The band later claimed they had been told by their event management company that Rourkela is only a 4 hour drive from Calcutta. Yeah right! It takes close to 8 hours - by train. Given the road conditions in Orissa, it actually took them 14.

Secondly, having arrived at the concert - at least then, the band should have given the audience paisa vasool. If you are a relatively new band with only a couple of hit songs, fine. Showcase them. But be open to singing other popular songs to keep the crowd on its feet.

As Prasoon Gupta reported for JAM from IIM Ahmedabad's Chaos festival where both Jal and another Pakistani band Strings performed:
Somehow, it was Strings which made the day – not only did they sing their originals but they even performed a medley with songs from DCH, Sholay, etc. and the crowds kept tapping their feet....Strings carried along the cricket mood into their erformance too – they not only spoke of ongoing matches but also played a little cricket right on the stage and hit many balls into the air for public.

Contrast that attitude with Jal, who chose to sing a sonorous new composition they'd penned in memory of 'earthquake' victims.

Given that Jal were charging around Rs 2.5 lakhs, the organisers effectively ended up paying them about a lakh of rupees to hear two hit songs. That's about 10 minutes worth of 'entertainment' and another 1 hour of we-sing-you're-forced-to-listen.

Repeat value
You get away with it once... But if you're in this business the fun lies in being called back again and again. And that is definitely not going to be the case with Jal.

This is especially true of the college circuit.There are 7 IITs, 6 IIMs and 18 NITs -all of whom hold festivals with big enough crowds and budgets to hold pro-nites. This year Jal and Sivamani/ Indian Ocean have been permanent fixtures at a large number of these fests. Past favourites include Euphoria and the old warhorse Parikrama.

Given that these fests mostly take place between Dec-Feb, there's a cool Rs 50 lakhs or so to be made over these 2 months if a band does about 20-25 such concerts. The issue is that even if one band performs very well, the college would like someone different the next year. Which is why Jal was snapped up at all venues.

But given that Euphoria has a reputation for pleasing the crowds, the wheel will turn full circle and they will be in demand next year once again. Jal, certainly won't.

The Atif Aslam angle
Of course, part of Jal's desperation lies in their need to be seen as the 'real' Jal, minus their lead singer Atif Aslam.

Aslam started his High School in PAF College Lahore, where he played cricket and became interested in music. He paired with a guitarist named Gohar Mumtaz, and the two performed for their college and at restaurants, later calling themselves "JAL" which means water.

The pair recorded Aadat together - it became extremely popular. But then Aslam left Jal and went solo with an album called 'Jal Pari'. The songs Woh Lamhey, Dil Haarey on this album were smash hits. Later, Mahesh Bhatt asked Atif Aslam for permission to use 'Woh Lamhey' in Zeher and the rest is history.

Meanwhile 'Jal' with Gohar Mumtaz and band members Farhan, Shazi also released an album with Woh lamhey, Aadat etc. So who is the real 'Jal'? Did Atif 'steal' Woh lamhe? Or did he, as a co-creator, simply exercise his rights?

Since the issue remains unresolved, the producers of Kalyug cleverly included both Aatif and Jal's versions of Aadat in their film. Mukesh-Anil, Atif-Gohar - the battles continue...

Bottomline: Jal is talented enough to survive without Atif . But talent alone is not enough. By being greedy and unprofessional on their concert blitzkrieg the band is losing fans and goodwill.