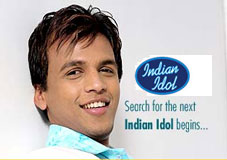 This time, last year, all of India was talking about Indian Idol. Abhijeet ya Amit. Why was Rahul Saxena eliminated. And so on and so forth.

Well, this year Idol has been qute thanda so far. A recent online poll by JAM magazine threw up some startling statistics. 82% of the jammers who took the poll said they had not seen a single Indian Idol episode. 13% said they had seen a few while about 5% were avidly following the show.

Even my maid and daughter who were avid Indian Idol fans last time, aren't tuning in. Poor TRPs confirm the general lack of interest.

An Optimum Media Solutions report noted that last year the 7 January episode of Indian Idol notched TVRs of 6.8, while the 5 March finale saw a surge in the ratings to a whopping 15.3

In January 2006 Indian Idol 2 ratings were on an average a miserable 3.31. A host of stars have been roped in to add 'buzz' - the latest being Will Smith. But it seems like too little, too late.

Sony took it for granted that we would tune in to Idol part 2. The promotion and build up this time was pretty low key. Plus, in the meantime they flogged the vapid Fame Gurukul which threw up a joker of a winner in Qazi.

The dark horse
And what they had not counted on at all - Sa re ga ma pa Challenge from Zee. The once staid show decided to go the SMS way. In addition they introduced the concept of music directors acting not just as judges but mentors with the creation of 'gharanas.'

These moves have been controversial (loyalists say the show was better in its unadulterated format). And they have created controversy, which is always a great boost to ratings.

The core issue has been SMS vs Talent.

Darbar was peeved when his favourite Nihira was voted out by the public.

Can't people recognise quality when they hear it? Just because Nihira can't wear revealing clothes or dance, should she be eliminated? Is that how we have ever judged our greatest singers, like Lataji?

Darbar later returned to the show - many cried this was a mere publicity stunt.

Then, Himani, Hemchandra and Vinit staged a walkout claiming they had been threatened by ULFA militants who supported the 4th contestant Debojit. They too returned to the show. But the issue of Debojit proceeding into the finals based on a huge number of regional votes has now caught fire...

Here's my take on the subject, elaborated in my column on sify.com published yesterdayThe ‘finals’ of any sporting event is fraught with glorious uncertainty. Anybody can win. Even if the contest is lopsided, even if one team is far more fancied than the other. Upsets can and do happen. And that’s why we tune in.

The finals of a ‘reality show’ however, are quite a different story. Friday (tonight) is the final showdown on Zee’s Saregamapa Challenge . But no matter how well 17-year-old Vinit sings, the result is a foregone conclusion. His rival Debojit has been getting a record breaking number of SMS votes for many weeks now. Nothing wrong with that, except that 80 per cent of those votes come in from Assam. And Debojit is Assamese.

I’m not saying Debojit is untalented. But is he the most talented? We’ll never know, because a huge number of people are choosing to vote not for ‘India ki Voice’ but ‘the boy from Assam’. Without giving the other contestants a fair hearing, a sporting chance.

In that sense, the show is truly mirroring reality. India votes for its singers the way it votes for its politicians! Merit matters less than the fact that the candidate is from my mohalla/ community/ state.

You can read the rest of the column here.

The reactions
Arunima wrote in to say:

I completely agree with you that in Saregamapa the voting pattern for Debojit is somewhat not acceptable as he is getting the votes mainly from the northeast region and not from the whole of India. But why single out Debojit? What about the others?

Basically at the end of each show every contestant used to request his/her home state to specifically vote for them . It is another story that the response was not so overwhelming everytime as in the case of Debojit.

The fact is for all reality shows like this the home state always plays an important role in a contestant' s win or lose.. Again on the other hand contestants from the south never get any votes from their home state because people from the south do not watch Hindi programmes. In a country as diverse as India if diversity plays such an important role in hampering someone's ambition and hope then there is no bigger tragedy than this...

A valid point. Women were not considered 'talented enough' to play in orchestras. When the auditions were held from behind a screen, where the performer was not visible, the percentage of women musicians in orchestras went up quickly from 5% to 50%!

This is an example used by Gladwell in his book 'Blink' which looks at the complexities behind snap judgements. In the orchestra case, the maestros would have been entirely unaware of the flaws in their judgment. They would have been outraged at the suggestion that their decision-making was compromised by sexism.

Now theoretically we could put all participants behind a screen and let people vote for the best voice. But then it would be a radio show, not a TV property.

While Zee could not have engineered votes from Assam (that happened spontaneously) they have certainly capitalised on it by announcing the same on every episode...

What can be done
Sameer Pant sent in a sensible suggestion:
Even in Olympics events, when multiple judges are givine marks to contestants, the highest and the lowest mark givers are eliminated and an average of the rest of the marksare taken. This is done to remove any bias a judge might have for or against any particular contestant. The same could have applied here.

Aur na mujhe aise strange emails aatey: " It is an article written by an idiot. I am astonished... Use your brain. Is Assam a part of India or what? For people like you the North East is always sidelined. Rubbishhhhhhhhhh."
I'm sorry but the conspiracy theory does not hold

The Indian government has made a mess of the North East situation, no doubt. But I and millions of other Indians think of Assam as just another state in the union of India. We don't not vote for Assamese singers because we are against their place of origin.

Many of us simply don't want to waste 6 bucks. For any singer, from any region.

Bottomline: Ultimately, the feeling is that neither Vinit nor Debojit deserved to get so far (Himani, Nihira and Hemchandra were more talented). Those who've been following the show say Vinit too garnered votes through means other than pure talent (apparently by making up some stories about a 'lady love').

But hey, these are 'reality' shows and the reality is that people want to discuss how unfair this one's elimination was and how badly that judge behaved. Because these are 'hope operas'.

And whatever the means a contestant can use to awaken emotions enough to vote for him - he or she uses. That's the way the show is designed.

At the end of the day, no one really loses. Most reality 'stars' end up earning big bucks through playback singing and live shows. Instead of struggling for years and years like the singers of a previous generation. And simply for that, I say, these shows raining down on us are a good thing.

Life is not fair - that is reality. Neither are reality shows which are actually not real at all...
Posted by Rashmi Bansal at 7:18:00 PM