Cartoonists on the Danish cartoons controversy 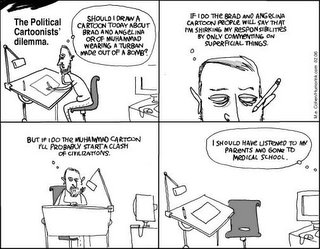 Nearly all cartoonists worth their salt have enraged some portion of their readership, often when religious symbolism was part of the cartoon... This said, readers should know that cartoonists working for mainstream American newspapers--and there are more than 80 around the country--generally try to avoid negatively caricaturing any group just to make fun of them.
- Signe Wilkinson, Pulitzer prize winning cartoonist with the Philadelphia Daily #

It can be argued that the editor of Jyllands Posten committed an error in judgement in publishing cartoons of the Prophet. But let us leave that aside for a moment and examine what a cartoon sets out to do in the first place.

Cartoonist Wilkinson notes, "The (Danish) cartoons were criticizing violence and suicide bombing in the name of Islam."

That, I think is a reality and cartoonists have every right to touch upon the subject. However, I do think using the metaphor of Mohammed was avoidable.

In a well reasoned article Hesham A. Hassaballa argues, "These caricatures of the Prophet is akin to publishing a cartoon of Jesus Christ as a Catholic priest being dragged away in handcuffs for sexually abusing a young boy. Christ is wholly innocent of the crimes committed by a minority of Catholic priests against young boys…”

However, he adds,"The Muslim reaction went way too far. Most definitely Muslims have a right to protest …but to torch a Danish embassy (Syria), throw eggs at a Danish embassy (Indonesia), take over a European Union office at gunpoint (Gaza), and even beat two employees of the Danish company Arla Foods (Saudi Arabia) is completely unnecessary and--dare I say it--barbaric". 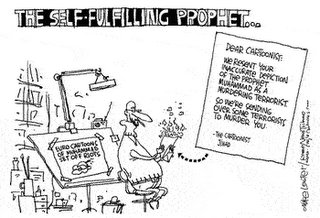 Or, ‘self prophetic’ as this cartoon puts it – brilliantly. 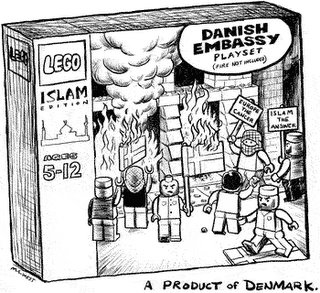 I quite like this one too, and in fact would have loved to use something like this in the next JAM (after all, we are the only Indian magazine which publishes cartoons on its cover!)

But no, ‘judgement’ prevailed and we went with Brad and Angelina (I mean the Indian version – Abhishek and Aishwarya).

I think a cartoon commenting on the extreme reaction to the cartoons is definitely within the ambit of free speech. But given our country’s peculiar brand of ‘secularism’, even that is not a good idea… 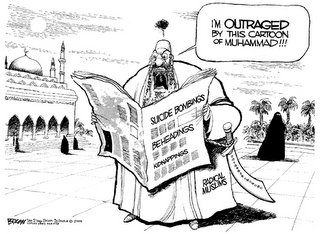 Daryl Cagle has a great blog running on the issue as well, from a unique point of view. That of the professional cartoonist.


And now, some serious observations
Hesham Hassaballa observes, "While I think it was wrong for the Morgenavisen Jyllands-Posten to publish those cartoons, it cannot be denied that newspapers in Arab and Muslim countries have published cartoons that were offensive to non-Muslims, especially Jews."

This is an important point. In fact, let’s look at the issue more deeply. Muslims enjoy the right to practise their religion in democratic societies such as Europe, USA or India. But wherever they are in a majority, people of other faiths must abide by their rules. And these rules have a religious basis.

And this extends to an extreme level, as this news report makes clear:

Members of the Commission for the Promotion of Virtue and Prevention of Vice, or the religious police, Thursday stumbled across a room converted into a temple while raiding a number of flats suspected of being used to manufacture alcohol and distribute pornographic videos, pan-Arab Al-Hayat said.

A caretaker who was found in the worshipping area ignored the religious police orders to stop performing his religious rituals, the paper added. He was deported along with two other men who arrived on the scene to worship.


Frankly, I don’t even remember this news being covered in India, leave alone any protests. And to think that despite this kind of attitude we invited King Fahd to be the chief guest at our recent Republic Day parade.

In a multi-cultural, globalised world Muslim societies cannot expect other faiths to ‘understand’ their sentiments. Unless they take some trouble to understand and live in a spirit of tolerance with these other faiths. Or even dissenters within their own faith.

The harassment of Aligarh Muslim University student Farah Khanum is a recent case in point. .

Farah was threatened by a section of the AMU students, who claimed they were interpreting what is moral in Islam, says, “Over a period of time, they had been harassing me and demanding that I quit wearing jeans and t-shirt and don a dupatta.”

Newsflash: Every Indian citizen has certain inalienable rights and freedoms.

Recently, the Supreme Court ruled that Aligarh Muslim University – despite its nomenclature - cannot be given the status of a ‘minority institution’. Whichever way that controversy is resolved, the imposition of a dress code on the women studying at AMU would be unconstitutional.

Writing in the Los Angeles Times, Tim Rutten noted: Nothing ... quite tops the absurdity of two pieces on the situation done this week by the New York Times and CNN. In the former instance, a thoughtful essay by the paper's art critic was illustrated with a 7-year-old reproduction of Chris Ofili's notorious painting of the Virgin Mary smeared with elephant dung. (Apparently, her fans aren't as touchy as Muhammad's.)

Thursday, CNN broadcast a story on how common anti-Semitic caricatures are in the Arab press and illustrated it with -you guessed it - one virulently anti-Semitic cartoon after another. As the segment concluded, Wolf Blitzer looked into the camera and piously explained that while CNN had decided as a matter of policy not to broadcast any image of Muhammad, telling the story of anti-Semitism in the Arab press required showing those caricatures.

He didn't even blush.

No Indian publication - with the apparent exception of the Patna edition of the Times of India – has published the original Danish cartoons.

But this morning pg 14 of the Hindustan Times cheerfully carries a 2 column technicolour picture of ‘Bharat mata’ – the recent controversial painting by M F Husain ‘depicting the nation as a nude woman on a scarlet canvas with Delhi, Mumbai, Kolkata, Gujarat and Goa inscribed across her body’.

No, it didn’t offend me – but the fact is some Hindu organisations have protested and the painting was removed from the auction. So technically, reproducing the image could have offended others.

And printing the cover ofthis magazine could, as well.

In the same edition of the newspaper, Vir Sanghvi, editor of HT writes

Of course we should be sensitive to religious sentiments. Of course we should try and avoid giving offence. But these are not absolute rules. If we do cause offence, then we are still within our rights as citizens of a free society to do so. And the people who are offended should simply avert their gaze. 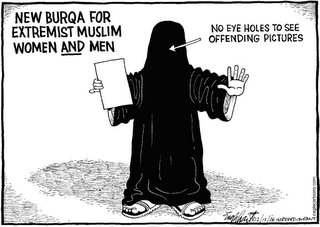 I completely agree. But let this principle apply universally…

Breaking the silence
As Mr Sanghvi notes,
Liberal Hindus must end the double standard of the secular mindset and speak out as loudly against Muslim fundamentalism as they do against Hindu extremism.

If we do not do that, we discredit the whole concept of secularism. More important, we admit that our liberalism is not an absolute value but a convenient stick to beat Hindu extremists with while making shameful and unnecessary compromises with minority intolerance.

Well, I have taken his advice and added my voice. Please do not attempt to shout me down – as always, rational and well-reasoned arguments and comments are welcome!

And no, I will not 'balance' my views by also ranting against Hindu extremists in the same breath because that is irrelevant in the present context.

All cartoons featured here are copyright of the respective cartoonists and courtesy http://cagle.msnbc.com.
Posted by Rashmi Bansal at 2:04:00 AM