The suspense ends, here is Book 4

Many of you have been asking about my next book. Some of you are busy guessing what it's going to be all about.

'Entrepreneurs who are less than 5 feet tall"

The last one, of course, is a joke. But the point is - I guess it has become quite predictable. The fact that I will pick up a theme and then give you 20 inspiring stories around it.

This is both good and bad. Good, because this is the 'brand' I have built and there are many takers for it. Bad, because it has become easy for me to do and I can easily become lazy and complacent.

That is why I decided to take a break from the well-loved series - and explore something new. In February 2011 I embarked upon 'Project Dharavi'.

I know, many books and movies and documentaries have been made on this subject. So when my friend and co-author Deepak Gandhi proposed the idea to me, I was reluctant. Is there really anything left to be said?

And that is how it started. Our thrice-a-week pilgrimage to meet and understand the people who make up this vast and vibrant community.

We went there without any clear idea of what to look for.
We went, not knowing what kind of material there might be.
But the deeper we dug, the more amazing people and amazing stories we found.

One cannot wish away the problems and the issues which exist.
But neither can one ignore the solutions which Dharavi has produced.
To make the most of every little resource, every little square inch.

We hope this book introduces you to the ingenuity and the enterprise of the 'little Indian'. The millions of nameless, faceless people out there who make up our economic life.Who are weaving together a new social fabric.

Although this book is not about you, we believe it will speak to you.
And not just through the power of words.

A young and talented photographer - Dee - shadowed us throughout this journey.
Capturing through his lens many manic moments and mellow moods across Dharavi.

"Poor Little Rich Slum' releases on 12th of May. Here is a first look at the cover, designed so beautifully by Studio ABD. 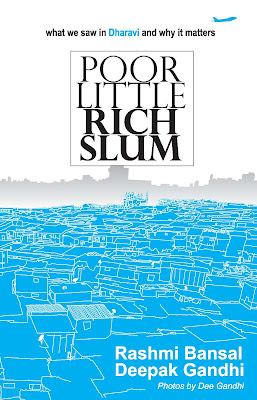 Pre-orders will begin on flipkart and other websites over next couple of days.

And you will get more updates from me - very soon! Watch this space.
Posted by Rashmi Bansal at 6:49:00 PM

Do you believe in miracles?

This story begins in September 2010, when Professor Prabhat Ranjan and I found ourselves in a Qualis vehicle. Lurching towards a sleepy student town, from Mangalore airport.

We were to speak at TEDx Manipal.

Partly out of curiosity and partly for timepass, I asked Prof Ranjan about his work. He told me about many interesting things, including a device he was developing for use by disabled people.

I thought it was a good idea, a noble idea, and said to myself – “ I must write about this someday”. Prof Ranjan invited me to visit his lab in Gandhinagar sometime. And that was that.

Exactly one year later, I was in Coimbatore. I had just completed the Bhavspandana program at Isha Yoga Ashram and was in a state of complete bliss. I decided to pay a visit to my batchmate K Suresh (Kesu).

This was not my first trip to Coimbatore, to be honest. Each time I would think of visiting Kesu and then, I would chicken out. You see, Kesu has been paralysed from neck down since the year 1999.

A part of me thought – “It will feel horrible to see him in that state”.

It was, however, exactly the opposite. Kesu may be sitting in a wheelchair, head drooping to one side, unable to speak or move. But he is intensely and vibrantly alive.

He looks as young – or even younger – than he was on the campus.

He has the vulnerable and helpless quality of a child.

But despite the body which has totally given up on him, his mind is sharp as ever. Kesu is clued in to everything happening in the world.

To watch them ‘talk’ through each other is to see love in action.

As we sat there, talking about world affairs, books, philosophy and common friends, I suddenly thought of Prof Ranjan. Could the device he had mentioned, be of help to Kesu? The least I could do, is ask!

It turned out that in the one year since we spoke, much had happened. The technology was more robust, it had better features, but it was all good only in theory.

“We have tried, but failed, to find a test subject,” lamented the good professor.

Thus, it was a ‘match’ made in heaven. It took another six months for the technical team to visit Coimbatore, to procure the required headset, and then to test and fit the device.

The first day that it ‘worked’ Jayashree called me, elation evident in her voice.

A couple of days later Kesu wrote this email to me, bringing tears to my eyes.

Thanks a million for enabliing me to type. I never thought I would start crowing about typing an email but stranger things under heaven and earth...When my typing speed improves, I will write a post about this and send the link to our batch.

I wanted him to announce this wonderful news himself – in the 1993 batch egroup as well as to the world. But I guess good news travels fast and this report appeared in the TOI yesterday: Professor ‘enables’ quadriplegic IIM-A graduate.

This is just the beginning. Prof Ranjan is working on making Suresh use speech synthesis so that he can communicate (like Stephen Hawking). In the near future, he sees Suresh being able to send SMS and make phone calls through this technology.
As well as operate TV and other power points such as light and fan.

The point is, such technology is available in the Western world. But it is expensive and unsuitable for Indian climate and conditions. Prof Ranjan’s device – low cost and ‘made for India’ – has the potential to help thousands of quadriplegics and paraplegics like Kesu.

But, Prof Ranjan is a scientist - not an entrepreneur. He needs someone who can come forward and take this technology out of the laboratory and into the world. An idea with the potential to blossom into a beautiful social enterprise.

And that is my main objective behind sharing this story. If it has touched you in some way, and you would like to be involved with it – please reach out to Prof Ranjan through his facebook page: www.facebook.com/prabhat.ranjan.

I have had a small role to play in this miracle. That of a messenger, who connected two people in search of each other.

But ultimately, I believe there is something bigger than all of us, a Divine Power, a Cosmic Force. Which made it happen.
Posted by Rashmi Bansal at 10:08:00 AM