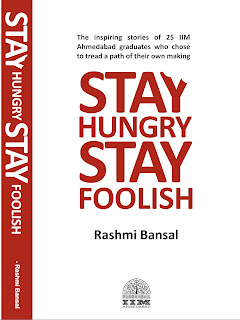 Never in my wildest dreams did I imagine such an outcome when I took up this project in Sept 2007. The idea of this book came from Prof Rakesh Basant of CIIE (Centre for Innovation, Incubation & Entrepreneurship at IIM Ahmedabad), the National Entrepreneurship Network (NEN) and Sanjeev Bikhchandani.

At first they only sought my advice on how to do it with the help of two RAs (Research Assistants). Instead, I offered to do it myself.

I did it for a lark, to meet some interesting people and to learn something from them. Maybe because of that purity of thought and purpose, it all came together as it did.

The time given to me was just 3 months, later extended to 6 months. It finally got done ‘just in time’ for the IIMA Entrepreneurs Conference on 30th June 2008. 1000 copies had been printed to be distributed free of cost to the delegates, as well as students on campus.

Yes, we did plan to make the book available to the public. But the slow channels of the book trade had decreed a release in Jan 2009 – six months later. That’s when Sunil Handa and Sanjeev Bhikchandani came together and said, “Let’s publish it ourselves.” The book was ready, IIM Ahmedabad and Eklavya Foundation could together do the job.

The plan was to print 5000 copies – half of it on ‘order’ basis. The entrepreneurs featured in the book paid money upfront for 100, 200, 500 personal-use copies. The rest was to be put into bookshops. With great difficulty Eklavya managed to rope in a Mumbai-based distributor – Shree. The deal was struck by offering 5% more margin than other publishers. We had no option, as I was not a ‘known’ author.

Originally, we wanted the price of the book to be Rs 95, at par with popular fiction titles. But our book had 330 pages, it was not economically viable. The price was fixed at Rs 125.

The book made its debut at Crossword Ahmedabad, a franchise store owned by friend and wellwisher Mr Gaurav Shah. Within a week, Gauravbhai called to say the book is in the ‘bestseller’ list. Can we send more copies? Not only Ahmedabad, but Crossword stores across the country were the first to pick up ‘Stay Hungry Stay Foolish’ in large quantities and give it prominent display. I will always be grateful to them for this support!

I sent the book to numerous editors, hoping for reviews. The result was scanty and mostly bad. One particularly mean review came from T R Vivek writing for VCCircle.com. Since the original article is hidden behind a paywall, I share what I wrote on my blog at the time.

Oh and later, I also made it to the ’10 silliest books of the decade’ list along with Paolo Coelho and Rhonda Byrne.

However, the feedback from readers themselves was astonishingly and overwhelmingly positive.

“I read my book and quit my job to start my own company.”

“This year I am distributing your book instead of sweets on Diwali.”

“I keep this book next to my bed and every night I read the ‘advice’ section.”

Everywhere I go, I meet people whose lives have been touched, whose hopes have been ignited. This is what motivated to write 4 more books about inspiring real-life Indian entrepreneurs (not from IIMA). Why I have made the writing of inspirational books my whole and sole career.

I take this opportunity to thank everyone who believed in me – my alma mater, which set me on this path and in particular Prof Rakesh Basant (he had some reservations about my ‘style of writing’ but ultimately didn’t make me change a word :).

My first publishers IIM Ahmedabad & Eklavya Foundation and in particular Sunil Handa (he brought an entrepreneurial touch to what could have been ‘just another book’. We did every small thing with childlike zeal, enthusiasm).

In fact I realise it can be *lucky* to not have a large publisher initially. I suspect hey would have over-edited and mangled my manuscript to death.

And finally, I want to thank all my readers, everywhere. It is because of you that ‘Stay Hungry Stay Foolish’ is still on bestseller lists. (And I hope you continue to pick up my other books :)

I hope my writings continue to serve as a window into the mind of self-made men and women. The brave and the bold, building a new India, one company at a time.

If you have any story/ incident to share about how ‘Stay Hungry Stay Foolish’ spurred you to action or affected your attitude, please send it to me. The id is mail AT rashmibansal.in.

Over the next one month, I will share these hungry & foolish stories. For the reading pleasure of all.
Posted by Rashmi Bansal at 8:13:00 PM

The Art of Healing - II

After years of self-flagellation and self-examination I have reached one important conclusion: My battle for internal peace and stability is with no one but myself.

This knowledge arrived in many bits and pieces. From books, from teachers, from spiritual practice. A line from here, a phrase from there – expanding my mind bit by bit. From the Art of Living program I understood the importance of breathing correctly. From Isha’s Inner Engineering program, the fact that you have ‘only this moment’, so live in this moment instead of the past or the future.

Books which contained eureka moments for me:

1) The Secret (Rhonda Byrne): The idea that thoughts create your reality is very powerful. If you change your thinking, your reality will change.
2) You Can Heal Your Life (Louise Hays): We are all carrying within us wounds from the past. But we can heal ourselves.
3) Many Lives, Many Masters (Brian Weiss): We are born again and again and we keep coming back to learn more ‘lessons’. Our greatest tormentors are our greatest teachers.
4) Celestine Prophecy (James Redfield): All human relationships are about exchange of energy. Unconsciously, we seek energy from the other and create conflicts.
5) Srimad Bhagavad Gita: The soul is eternal and can never be destroyed.

So far so good. But intellectual knowledge is one thing, accepting these principles and living by them is another. There is a deep resistance within me. Especially to the idea that I am the sole creator of everything that I experience. It is so much easier to blame the world.

He made me angry.
She let me down.
Usne aisa kyun kaha.

The Bhagvad Gita says: “The nonpermanent appearance of happiness and distress, and their disappearance in due course, are like the appearance and disappearance of winter and summer seasons. They arise from sense perception,and one must learn to tolerate them without being disturbed.”

Why is it almost impossible to do that?

When I attended the Bhav Spandana program at the Isha Ashram I experienced the fact that ‘joy is our true nature’ . That love is an energy that radiates from within us. I want this experience to be my only reality. Yet a month later, it slips away from my grasp. I continue to experience that state of bliss from time to time but I yearn for it to last longer.

Knowledge of impermanence is great but desire for permanence remains.
The quest continues, more lessons are learnt.

There is a person in my life who irritates me intensely. I used to blame this person for my irritation. I now realise it is my choice to get irritated by another’s actions or words. It doesn’t feel like a choice, it is almost automatic. Because that is my ‘sanskar’.

A sanskar is a habit or belief which is deeply ingrained in us. The reason for that is it is a carry-forward from many lifetimes. I have a tendency to lose my temper. I have done this so many many many times that it is what comes to me most easily. To respond in a different manner would require conscious effort. And a deep desire to change myself.

This point was driven home to me while watching the series ‘Healer Within’ with Brahmakumari Sister Shivani. It is available on Youtube and watching one episode a day is something I look forward to. Episode no 17 held a crucial revelation.

There are 3 ways in which we exchange energy. One is that we ‘reflect’ it. Someone is good to me, I am good to him. Another is mean to me, I am mean to him. The way you treat me is the way I treat you. This is the basest and most common way in which we lead our lives.

The second way is to ‘absorb’ another’s energy. Someone shouts at me, I stay silent. That person could be my parent, or boss or husband. I need my job, I don’t want to create a scene. So I do not attack. However, I am creating pain within me. Over time, this negativity I am absorbing will show its effect. I may experience a physical illness or a mental breakdown. So, this path is also not a desirable one.

The third way of living is to transform energy. I am dealing with a negative person, still I neither reflect nor absorb their energy. I tell myself ‘that is his sanskaar’ but my sanskaar is peace. My power and my peace is my protective shield. I withdraw myself from the influence of their sanskars, instead radiating pure wishes and blessings to them. In doing so, I have transformed that energy.

Wow. I realise that all my life I have been a reflector or absorber. I never considered this third way of living. The most powerful way of living.

In the video Suresh Oberoi asks Sister Shivani, “But how long can I be good to someone who is not good to me? And why should I be good?”

This is the resistance within us, which prevents the experience of internal peace. Main kyun karoon, woh to saala kuch karta nahin.

Life has thus become a competition in making each other miserable. Or waiting for someone to come along and make us happy.

I come back to that important conclusion: My battle for internal peace and stability is with no one but myself.

I must step onto this battlefield, face my demons. Or live in uneasy truce, with them.

Also read: The Art of Healing I