Life is full of what ifs. What if I had attended IIM Calcutta instead of IIM Ahmedabad? The earth would not have moved of course, but it was one of the reasons I paid a visit to IIM C a couple of days ago. That, and professional curiosity.

IIM Calcutta is the 'original' IIM. The first one that came into existence. And yet, despite its MIT lineage, the glorious headstart and impressive enough alumni network, it is now considered to be behind not just IIM A but IIM B. What happened?

Well, I can't provide a conclusive answer but here are a few quick impressions. I know my IIM A background may be held against me but in my defence I would like to point out I write about bschools and hence make it my business to gather first hand information about as many as possible.

So this is about more than mera bschool tere b school se accha kaise. For the most part!

Joka, here I come
The postal address of IIM C mentions 'Diamond harbour'. In the course of a 200 buck taxi ride from Howrah station, you get the full 'experience' of Calcutta. Past the amazing British zamaane ka buildings including the Governor's mansion and the India Government Mint.

Past trams, markets and streets and streets of grimy looking structures which look like they haven't been painted since 1947. The scenery does not improve until you reach the IIM C gate. 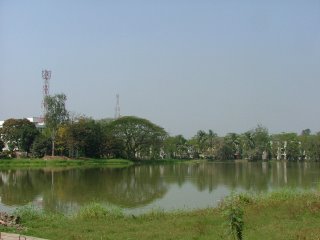 Inside, is the most beautiful holiday resort you can check into for two years. Yes, I heard of the 'lakes' but imagined they would be ponds. This is breathtaking. 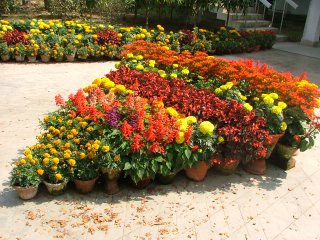 So are the flowers. I'm told they bloom, all year round.


The whole atmosphere is friendly, not intimidating. And here, yes, I will have to compare with IIM A. I remember the first time I walked into that campus, climbed up the Harvard steps and viewed the Louis Kahn plaza. I felt awe. I felt humble, insignificant.

In time, the maze of red brick buildings became more familiar and well loved than home. But a sense of this being a larger than life institution remained. That sense is missing at IIM C.

It may sound superficial to say that architecture can make so much of a difference in making or breaking a brand but it's true. When a newspaper has to choose a stock photo to go with any article on MBA, what does he or she do? 98 times out of 100 the photogenic IIM A makes it to print.

And with many other b schools from MDI to MICA also choosing the red brick look, it's more subliminal brownie points for Brand IIM A.

Looking deeper
IIM C grads themselves admit (and proudly so!) that the institute is extremely laidback. Not just in terms of atmosphere but academics. Even in term 1 only 75% attendance is mandatory.

In contrast no one would dream of bunking in the early weeks at IIMA. Weeks which feel like 'Survivor' episodes although it's rare for anyone to actually get 'eliminated'. But everyone has a few of those nightmares....

In 1991 - when I got my call letters - IIM B was also laidback and less competitive. Except it was considered to be far far behind IIM C. It was, in fact, known as the 'public sector IIM' because that's where its grads generally got jobs.

Then, several things happened. A director who was earlier a faculty member at IIM A fiddled around and made the B program more 'tough'. More importantly, Bangalore's rise as an 'IT capital' saw its stock as a city zoom while Calcutta was stagnating. Placements at IIM B caught up with A and C to a large extent.

Then, circa 2000, a Business Today survey made IIM B the 'no 1' b school in the country. A ranking no one believed but had its shock value.

The next year, A regained its no 1 position but B was now ranked ahead of C in almost every survey. Yet, IIM C and its alumni remained complacent. 'Who believes these surveys anyways?' was their defence.

Which is true but a combination of all the above factors led to a 'tipping point'. Students who had the choice started opting for IIM B to C. Guided by buzz from seniors and advice from coaching institutes.

Having recently visited IIM B I would say there is a sense of forward movement, new ideas, new initiatives on that campus. The PGPSEM program - a 3 year part time course for software professionals is a big hit and will soon be extended to Hyderabad and Chennai. IIM C too has several executive programs but none is a brand name as such.

IIM B has set up an Incubation centre funded by Infosys' N S Raghavan, IIM C has a centre for entrepreneurship and innovation but it seems to be a far more armchair variety than hands-on.

Bangalore being a far more happening city also has an impact in terms of attracting faculty. The faculty list at IIM C is over 90% Bong. Now you can argue that is because Bengalis are one of the few communities naturally inclined towards academics. But the faculty at both IIM A and B is far more mixed.

So it does appear as if sentimental attachment towards Calcutta might be a deciding factor for an academic choosing to work at IIM C. And that very factor may put off others. A friend who taught at IIM C for some time found the city rather dead and oppressive.

That's changing, with Calcutta - and Bengal in general - now playing 'catch up' with the rest of India. But the Joka campus also needs to join that game. 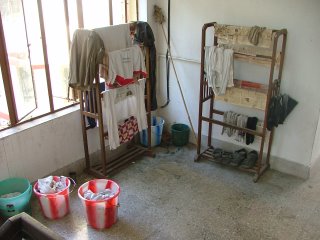 Whatever the intellectual prowess of IIMC may be, some of the infra structure sucks big time. The hostels are shocking - ancient, lower middle class looking structures.The rooms are tiny- you can barely fit in one bed, and study table. The corridors are full of wooden racks where junta's underwears and banians hang to dry. 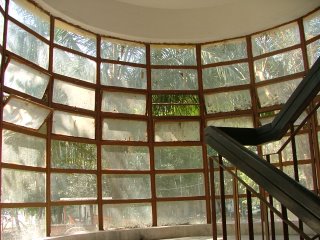 Yeah, one of the hostels is 'co ed' (but there's a separate wing for girls - they don' actually have rooms next to each other). That one seems to have rooms with modest balconies. But the overall impression is 1960s, Marxist style living quarters. Peeling paint, rust, lack of maintenance.

IIM A dorms were, in contrast, far better. Even there, much needs to be done to upgrade the old campus housing upto the standards of the new campus. But at IIM C I think entire hostel blocks need to be demolished and rebuilt.

Meanwhile, adding a few modern amenities like a washing machine and mini fridge wouldn't hurt. To attract international students - as IIM C hopes to - these changes will be absolutely necessary!

I know a bunch of you are going to be quite upset by now... And that the average IIMC grad believes he or she is special, creative and different compared to the supposedly driven, structured and soulless types from IIM A.

But, to a dispassionate and outside eye, there is a lot that can and must be done to the campus. Rankings aside, IIMC needs to regain its clout, become a leader in certain chosen spheres. Right now it appears content to follow where others dare to tread.

A quick example: IIM A starts a PGP X program (1 year MBA for execs with 7-15 years experience), IIM C follows a few months later. Does it matter who gets there first? Hell, it does!

Perception is reality when it comes to any kind of brand. And right now IIM C seems more slothful than swift. More content to rest on past laurels than carve out a vision for the future. It's time the institute and its alumni wake up and kick some serious butt.
Posted by Rashmi Bansal at 1:57:00 PM