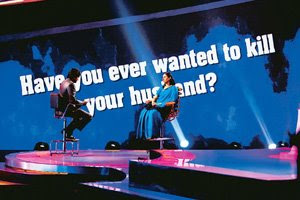 Star Plus debuted the Indian version of 'Moment of Truth' today and I think it rocks as much as the original, in terms of morbid fasciation quotient for the viewer.

The real meat lies not in one family being torn apart with skeletons tumbling out of its Godrej almirah but the fact that every viewer is thinking: "How would I answer that question?"

When I first saw the phoren version of Moment of Truth on Star World, I thought,"Here is one show that will *not* get Indianised." After all we are a 'khaandaan ki izzat' loving country, would we do such things for money or 15 seconds of fame? (Infamy is more like it!)

Well I was wrong. The very first contestant - Smita Mathai- was an average middle class, silk-sari-with-mangalsutra kind of woman. She answered 12 questions - on everything from parents and inlaws to husband's alcoholism. She admitted she had thought of killing her husband at one point (heh heh - who hasn't :)

But seriously, she gave an eloquent explanation about his alcoholic period and how she could not see him suffering...

Q 11 I thought might do her in: "Are you still married to your husband for the sake of your children?"

Eh - 95% of the Indian population is, and finds nothing wrong with that. "Log shaadi bachchon ke liye hi to karte hain.. aur nibhaate bhi hain. Yehi to Indian culture hai."

Anyhow, Smita's lips quivered, her eyes seemed uncertain but she said "No".
And the polygraph agreed.
Husband whooped with joy.

Q no 12:"If your husband never came to know about it.. would you consider sleeping with another man."

Oops, I thought, she is trapped now. This is a hypothetical question. "If the bank never discovers you have stolen a crore of rupees, would you steal the money?" It's a fantasy and everyone has fantasies!

Now Smita can say "Yes, I would consider sleeping with another man if you never find out". Husband need not get offended because another man is not necessarily Mr Muthuswami next door but perhaps Shahrukh Khan. Or Brad Pitt. Or the dishy gym instructor.

But Mr Mathai does not read such magazines. He is a hot blooded Indian male and will definitely feel insulted.

Knowing the consequences of saying "yes" Smita says "no".
When the polygraph beeps 'false' she looks surprised and says,"Yeh nahin ho sakta!"

Smita leaves the show with zero rupees and will spend rest of her life explaining that polygraph tests are not always true. They are not admissible in court as evidence. That she was tricked.

The truth is she was tricked, kinda. She thought she had 'nothing to hide' but discovered we are constantly hiding things. Even from ourselves.

The makers of this show have every intention of disrobing you -just like Draupadi was, in front of a full house. She had no choice, but Smita did and I wish she had quit when she could... She was too brave for her own good.

Tomorrow there is a thrice married buddha on the show. It will be spicy but you know what, more friends and relatives will snigger behind Smita's back than his. Because the 'morals' of society are supposed to be guarded by the women.

That's why brides in MP are 'tested' for virginity.

And why Rakhi Sawant is asked about hers, from a guy who apparently has a girlfriend back home (but still decides to participate in a swayamvar!)

The fun part is Rakhi got to kick that guy off her show. Which I think makes a statement.. of sorts. It's nice to see such issues being aired - even if is on a show which is about as 'real' as Michael Jackson's nose.

Sach yeh hai ki I am watching 'Rakhi ka swayamvar'. Apart from the drama, the palace is beautiful, and so are her clothes!

Aur ek chhota sach yeh bhi hai that I can't blame my book-in-progress for writing less on this blog. I've just been lazy, and I think I'm getting hooked on twitter. 'Instant gratification' and easier to tweet than blog on GPRS!

I need to remind myself that I am first and foremost a writer.

And so I must write.
Even if it is, about what I think of twitter...

As Captain Kirk might have put it, this blog's mission remains: 'To boldly go beyond 140 characters'

Sach ka saamna - 11 pm, Star Plus. Watch for high drama & Rajeev Khandelwal. And to have something to discuss, at the water cooler.
Posted by Rashmi Bansal at 11:48:00 PM 65 comments:

Is a day when you learn something new.

And there is so much beauty and knowledge and wisdom in this world, that every day can be good, I say!

Well, today I was in a bookstore, waiting for a friend when I picked up a hardcover called '10 10 10' by Suzy Welch. I flipped through it and essentially she says:

"When making any difficult decision think about its consequences in 10 minutes, 10 months and 10 years."

Wow, I thought. That *is* a great rule to live by!

Now I don't plan to read the book itself (reviews are average) but the five minutes in that shop were certainly well spent!

On the way home I tried applying the 10-10-10 rule to a few dilemmas I'm facing in life. Let's take a relatively minor one, like not being able to blog that often these days.

It isn't lack of ideas, but a question of prorities. I'm trying to complete my next book and that takes all my heart, soul, discipline and determination!

In ten months: It may affect this blog's readership (sometimes I wonder, if I slow down too much would I simply lose the *desire* to blog?)

In ten years: If I write a book which touches lives and ignites minds, it would all be worth it!

Like today I also learnt that I can eat an entire thin crust pizza (all 8 pieces) when really really hungry. But I don't think it qualifies for the 10-10-10 treatment.