Think 'research' and what comes to mind is serious, bespectacled individuals - with or without labcoats - obsessed with matters tres importante. Certainly, they must possess PhDs and use long English words in long winding sentences. After all, they cogitate, while mere mortals only think.

On display were the projects taken up by a diverse set of youngsters - from Pen to Ghatkopar, Lalbaug to Bainganwadi. Each researching a topic close to its heart.

A young boy - no more than 16 or 17 - earnestly explains to me the problems faced by orphans in choosing a career path. 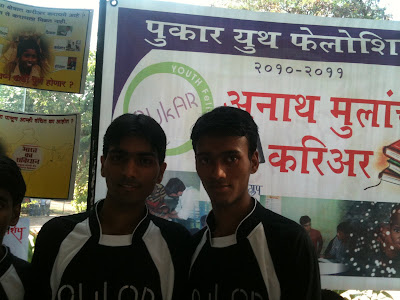 The best a boy from an orphanage can hope to do, he says, is join an ITI.

But the boys have neither the knowledge, nor the financial capability to dream bigger dreams. To become doctors, CAs or engineers.

Indeed, it's a subject I have never paused to think about. Or read about in the media.

"Why did you choose this topic?" I asked the boy.

"Kyunki main bhi orphan hoon," he said, without hesitation. Just a little luckier than others. This boy is studying in class 12 and also working as an apprentice with Godrej. In fact his entire 'research group' consists of orphaned boys, and they have attacked the subject of their study with vim and vigor.

As have the boys of Bainganwadi, a slum colony in Govandi suffering from severe water problems. This group has put together a poignant photoessay capturing every aspect of the issue - from the hardships caused to men, women and children queueing up for water, to the hypocrisy of the local politicians and religious leaders supposedly 'fasting unto death' to secure water for the residents.

Two glass beakers are on display - one filled with grey water, one with yellow. 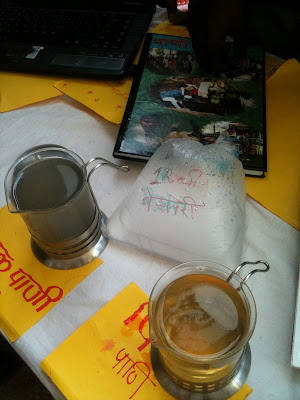 "The yellow water is what people take out of the ground, by digging a hole inside their kholi…"

The entire colony you see, is built on reclaimed land.

The grey water people buy - and use for bathing and washing. Two rupees a bag. Clear water - Bisleri water - is a most precious commodity.

"People spend almost Rs 60 a day just on water!" says one of the boys.

And this is the situation inside Bombay city - not a drought-affected village in some distant taluka. Quite an eye-opener!

Another project which truly stood out was a group of girls from Santacruz (E) who decided to investigate an everyday matter: "Ladke naake par khade hooker chhed-chhad kyun karte hain?"

Why do boys congregate at street corners to ogle and whistle at girls? Results are here, for you to see. 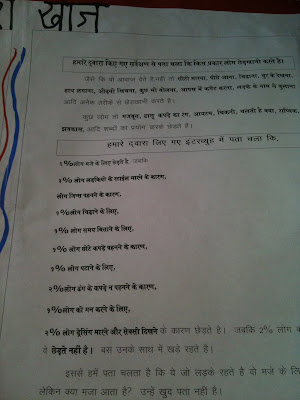 An important conclusion of this research was that 'padhe likhe log bhi chhed chhad karte hain". ie educated men also indulge in this behavior. I don't know if this is a path-breaking finding but what is path-breaking is that girls are no silent victims.

Of course, the girls' families were a little taken aback initially but now they are proud and happy.

I don't know if any of these projects follows the strict guidelines of 'research'. And the usable output at the end of the project is often unclear. But one thing is for sure, Pukar is an initiative with a difference, and one which makes a difference.

The most wonderful aspect is that it is not restricted to English-speaking elite, college-going youth. A majority of the projects were prepared in Marathi and Hindi, and the participants came from diverse backgrounds. Which is something we rarely see...

At the end of the day I don't know if Pukar projects can really be called 'research' but certainly it is citizen journalism at its best. Curious minds working - with passion and direction - to document the world around them.

The facts and findings are raw and relevant, and I hope they are used by journalists, by sociologists and by the administration - to do their jobs better. As well as inspire students everywhere to put their hearts and souls into any project they take up.

Not wake up the night before and frantically do google 'research'.
Posted by Rashmi Bansal at 3:55:00 PM

The Insider's Take on 'Alternate Careers'

Two weeks ago I was in Dehradun, addressing an auditorium full of 12th class students on 'alternate careers'. And I realized one very sad fact. Twenty years after I felt pressurized to take up the safe option of science over arts, economics over English literature - the same mindset prevails.

95% of the students - representing the so called 'middle class' of India - raised their hands to say they are pursuing a path laid down by parents. Engineering nahin to medicine nahin to MBA.

But don't we keep hearing - "Today kids have so many options!". While that is true, most students are not given the freedom or encouragement to go down different paths. Parents mean well and want their kids to be 'happy'. But they are woefully ignorant and see safety in sticking with the herd.

Students know, in their hearts, this is not what they want. But they don't have the courage to take a stand. And what do they take a stand on? They have no idea of where their passion lies.

Agar kuch idea hai to they are convinced it is 'very hard' to make it doing something you love. Rozi roti kamaane ke liye kuch to sacrifice karna padega!

Since all of middle class India is dreaming of one thing - acchhi degree leading to acchhi (assured) naukri - let us examine the premise. Let's say you do your BTech from a theek thaak college and make it to Infosys or TCS. You can expect a starting salary at age 22 of about Rs 3 lakhs.

Assuming you perform in the top 25% and hop a couple of jobs, you can expect to earn around Rs 1 lakh per month by age 30.

Is that such a big deal? I think not! My contention is that if you join any industry at age 21 or 22 and gain 8-9 years of experience - you would be earning that much. Assuming of course that you have some passion or flair for what you do.

The path taken may of course be slightly different. You may not get a 'brand name' employer right out of college and your starting salary may be much smaller. Your work output and skill will matter more than a 'degree' as such. But I can bet there are any number of you out there who are nodding your heads as you read this. Haan - yeh to sau pratishat sach hai.

Share your stories with me. The criteria is that you are earning Rs 1 lakh per month at age 30. Give or take a couple of years. And if you don't earn it in money terms you get it in perks or other material benefits. Not to mention the satisfaction of doing something you are really good at and love doing. And calling it 'work'.

Mail me at rashmi_b at yahoo.com with brief details of what you do and I will mail you a small questionnaire. I will share your stories on this blog and other mediums, to spread awareness among students.

I know the vast majority will continue to follow the easy path, the path of mediocrity. But if we can ignite a few lost souls out there, those few sparks are enough to create a bonfire of old ideas and prejudices.

Breaking this cycle of doing the done thing, even if we are dying in the doing of it. Every minute, every hour.
Posted by Rashmi Bansal at 7:11:00 PM