Up in the air

It's raining. And it's been raining just about every day, several times a day since the monsoon started in Mumbai. I've lived here practically my whole life and honestly, I do not recall *so* much leakage from the celestial waterworks!

Today's TOI confirms that feeling with a statistic: the total rainfall till date (and we have a month to go!) is 27% over expectation.

Not complaining - especially since I do not commute anymore. The weather is definitely pleasant. But I think I am not alone in feeling 'mausam badal raha hai'. We don't have to take R K Pachauri's word for it, it's what ordinary people are saying, especially in the Himalayas.

In June this year I had a chance to visit Sangla valley, a 12 hour drive from Shimla and a place of amazing natural and riverine beauty. But the drive to Sangla is not exactly pleasant. After Rampur Bushahr, every few kms there is blasting, digging and tunneling going on. 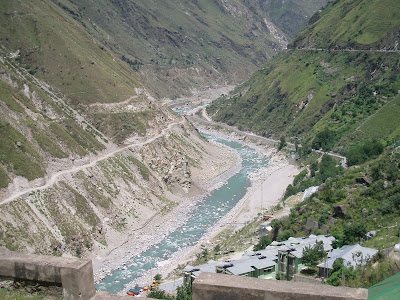 A slew of hydro electric power projects are under construction. The Sutlej river is an anaemic, sludgey grey; the air is thick with fine dust. 'Jaypee' townships have sprung up at each location - and there are so many that locals joke "HP is now 'JP'".

Perhaps this is all good for us. Hydroprojects bring electricity, which India badly needs. Rivers are a natural, non-polluting resource - unlike fossil fuels and coal. Or the dangers of nuclear energy. 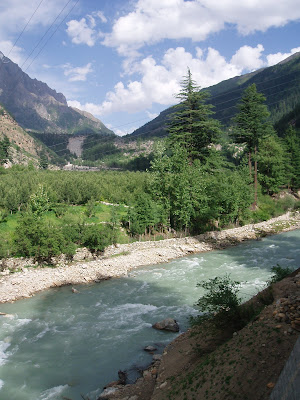 But the heart says, it can't be. When you get a first view of the Sangla valley, where the Baspa river flows in its full natural glory, it seems so so wrong. Pure and green, gurgling and sparkling, the waters of the Baspa flow upto Karcham, where they join the Sutlej.

Where man captures beauty and the majesty of Nature, and cages it for commercial exploitation. 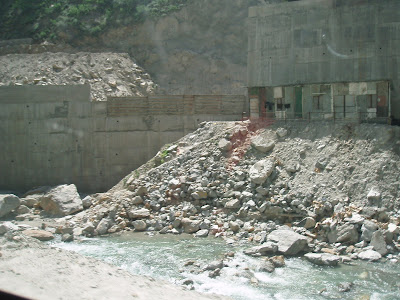 But what can the simple people of these misty mountains do, except protest?

Well, one warning bell has been sounded by the recent flash floods in Ladkah. Was it merely a cloudburst, an act of Fate? Or something more ominous?

An insightful article in the Economic Times noted that the average temperature in Ladakh has gone up by almost 3 degrees in the last two decades. At the same time Ladakh transformed itself from a nomadic society to an agrarian one, creating conditions for torrential
downpour in a highland desert, where 'rain' was unknown.

"Ladakh used to receive below 20 cm of precipitation annually which made this highland desert fall in the category of Gobi, Atakama and Tibet plateau, with snow-fed rivers sneaking through rugged mountains and deep gorges; exposing very little to sun resulting in negligible evaporation and almost no rainfall.

Thousands of hectares of new irrigated green fields and acres of new tree plantations, spread the water from narrow rivers over a large surface exposed to evaporation, ultimately resulting in unprecedented torrential rains. Rapid growth of human population and green fields for food tempered the eco-system of a high-land arid region, leading to the catastrophe of August 6.

Increasing rainfall first raised eyebrows of some local environmental groups in 1992-93 and they warned about the consequences of changing a high-land desert into a green belt. But nobody paid heed to this."

The same story is playing out in Lahaul Spiti, which received record rain over the last 3 months. Again, this is an area known as a 'cold desert' which earlier recieved no rain, only snow.

Speaking to the Indian Express State director of the World Wildlife Fund Vandana Thaplayal, who is researching climate change in high-altitude areas, said:

“The change in land use pattern, which has shifted from shrubs to growing apples and other tree plantations, requires a detailed research to know whether the unusual rain and such changes have a relation.”

And by the time we do know, might it be too late?

Meanwhile more chapters in this story are being written in the beautiful state of Uttarakhand. Where hydropower projects are coming up on all the major rivers - and meeting with protest. One such project on the Bhagirathi river - a tributary of the Ganga - was recently scrapped.

But more on religious grounds, than environmental impact. In fact, public pressure built up mainly because of a fast unto death in Haridwar by former IIT professor G D Agrawal. The project envisaged a 16 km diversion of the river into an underground tunnel - changing the landscape between Gangotri and Uttarkashi.

Dr Agrawal's plea for 'aviral dhara' is on emotional and cultural grounds. What about science? Well, unfortunately 'environmentalists' enjoy little credibility today, because they seem to oppose everything that the aam aadmi see as 'progress'.

The trouble is, environmental science cannot be exact, and hence tends to be alarmist. The worst that could happen is really very bad, but we cannot say for sure when or where it will actually happen.

But at some level we do know, Nature is an extension of our soul. If we torture it, we will feel the pain. But perhaps that is the price we are willing to pay for progress?