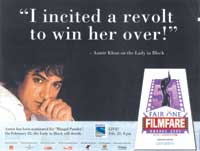 Aamir Khan is suing Bennett Coleman and co, publishers of the Times of India and Filmfare magazine for running this ad using his photograph and a 'quote' without his consent. Aamir is demanding Rs 21 crores and an apology.

A 'close associate' of the actor told Midday: "One can’t attribute quotes to someone or use his picture to promote or endorse something without permission... After all, they are cashing in on his reputation and image, and he has the right to choose what he endorses."

And Aamir would never endorse the Filmfare awards because he 'does not believe in awards'. Or any others, for that matter except the National Awards. And, I guess the Oscars.

This, I think, rankles the folks at Filmfare. Other stars were featured in the series of ads but note how staid the copy is. Woh to award lene aayenege, unhe naraaz thodi kar sakte.... 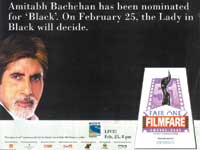 The one with Amitabh reads: Amitabh Bachchan has been nominated for 'Black'. On Feb 25, the Lady in Black will decide. 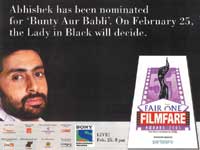 And the copy in junion B's ad is identical! Abhishek has been nominated for 'Bunty aur Babli'. On Feb 25, the Lady in Black will decide.

Had they similarly written 'Aamir is nominated for 'Mangal Pandey' I doubt the star would have bothered to sue them. But implying he 'incited a revolt to win over the Lady in Black' (the Filmfare statuette) is a bit over the top.

I think if an actor does not believe in awards you should respect that and not nominate him in the first place. Organisers, please keep this in mind next year - there were other fine actors in Rang de Basanti besides Aamir.

But of course if it isn't a major 'star' the nomination will only be for 'best supporting actor'.

Besides, this year sees both Karan Johar and Rakesh Roshan releasing films which means the competition will be Shahrukh vs Hrithik.

Sigh! Wish more stars would revolt against these 'I Love You-You Love me, We're One Big Happy Family' series of awards...
Posted by Rashmi Bansal at 12:46:00 AM