I picked up Outlook's 'India's best b schools' issue as a matter of routine. And opened it with the usual 'let's see where they screwed up' kind of attitude. Just past experience - coz year after year these surveys never fail to disappoint.

Well, I must say that this year's Outlook effort is better thought out and likely to be a little more helpful to students. I still disagree with the survey on a few points - but overall there is improvement.

a) Year after year survey rankings suffer when some well known institutes refuse to participate. Most notably, the IIMs had decided to stay out of all rankings a couple of years ago.

Solution: IIM A volunteered information. CFore - which conducted the survey for Outlook - used the Right to Information act to get data from the other IIMs.

b) What about Bajaj and FMS? One or the other usually refuses to participate because they score very low in parameters like infrastructure.

Solution: University departments have been listed separately. The bad news is, no scores are provided. Sadly, this means that UBS Chandigarh - which ranked # 11 last year gets slotted as the no 3 'univ department'(below JB and FMS). Not fair, I'd say.

Also, nowhere do we get a sense of where the univ depts stand with respect to the entire universe of b schools. In fact, to avoid controversy, an 'overall' ranking has been provided only for the top 10. 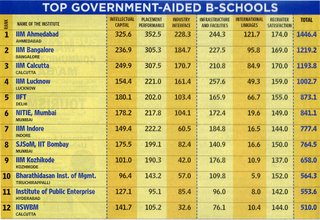 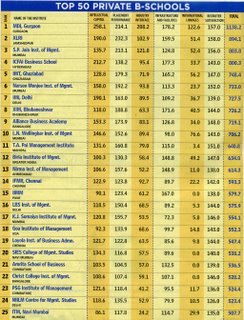 There are separate rankings for the 'top government aided b schools' and 'top 50 private b schools'. (click to see enlarged pic - scanned from mag as results will be available online only from Oct 16)

I like the idea of comparing apples with apples and oranges with oranges. The trouble, however, is that a student is equally willing to bite into either the apple or orange - all he/ she wants to know is: how sweet is it?

And herein lies the crux of the issue. This survey is based almost entirely ie 88% on facts. And 12% on a subjective parameter called 'recruiter satisfaction'. Fair enough (although satisfaction can also broadly be gauged by the fact that a company is coming back year after year to recruit from a campus).

But what about intangibles like 'brand value' and 'alumni network'? They are not factored in - as far as i can see. A way has to be found to quantify and include this X factor - and I think it must be given a weightage of around 20%.

Otherwise the advantage certain b school brands have over the other will never truly be captured... Compartmentalising is convenient but dances around the problem instead of tackling it head on.

The overall rankings
Which Outlook did not publish.. but which can be compiled on the basis of the scores provided. When you mix up the government and private b school rankings the top 25 looks like this (note: univ departments have not been given scores and hence not included in this list).

Figures alongside are composite scores.

1) MDI consistently manages to be ranked # 4. But as far as students are concerned, it's IIM A, B, C and L - then XL, SP, and MDI. In fact on IIT campuses students generally apply only to the '4 IIMs' (not even I and K) and rarely if ever to MDI.

2) IIM Indore or SJSOM would be preferred by most over ICFAI Hyderabad. In fact, despite scoring well on a large number of parameters, ICFAI to my mind does not belong in the top 10 for the following reasons:

You have only to compare the list of companies and designations of jobs offered at their flagship Hyderabad campus with the same at IIM Indore to realise the difference. For example UTI Bank offers 'Deputy manager' positions at XIMB but 'Executive' positions at ICFAI Hyd.

- ICFAI scores when it comes to 'intellectual capital'. While I think their case study initiative is commendable, the books and journals they publish - what I have seen of them - are less than impressive. One can, of course argue that almost all research generated from Indian b schools (IIMs included) is unimpressive. Then, why give an institute brownie points for churning out such material in larger quantities than other b schools and help it achieve a higher ranking?

- ICFAI has an independent entrance exam, which last year attracted 30,000 students. The buzz is that 'almost everyone' gets an interview call. Which may be an exaggeration but certainly the selectivity ratio is not very high

Secondly, not only must you travel to Hyderabad, you pay 3000 as 'interview processing fee'. So imagine, a cool Rs 3-5 crores is in the ICFAI kitty even before you join the course. This is not a practice one associates with institution of repute. Especially given the high course fee charged in any case ! (Rs 5.5 lakhs excluding boarding/ lodging)

3) IIM Kozhikode has been ranked no 19. It won't affect student interest in the campus ('IIM is after all IIM yaar') but it helps answer the question: I or K? Clearly Indore has established it is # 5 in the IIM hierarchy.

So yes, IIM K ranked # 19 appears absurd but, seen objectively, it should be a wake up call to the institute. Sure, it has the IIM brand name but that should not make it complacent.

Kozhikode appears to have a problem with intellectual capital. In fact, there's been an exodus of sorts last year. Notice the lack of full time faculty (barely 25%). Strangely enough the 'academic background' of the guest and adjunct faculty remains undisclosed on the website although I can tell several are professors at other IIMs.

K and I also suffer on industry interface. As Premchand Palety rightly observes in the opening essay 'The New Badshahs':

A major reason for their bad performance is location disadvantage. For effective industry linkages, any B-school should be near a corporate hub. Explains Pritam Singh, ex-director of IIM-Lucknow, "To achieve excellence, a B-school must have a business lab, like medical colleges have hospitals, that provides real-life exposure to live cases and projects." In light of the experiences of IIMs in Lucknow, Indore and Kozhikode, he questions the government’s wisdom in starting a campus in Shillong.

4) There are some absences in the Outlook survey, notably: all IIT b schools except for SJSOM, Symbiosis and related instis, and MICA.

If RTI could be used to extract info from IIMs, I think the same should have been done for IIT SOMs. If I were an engineers an IIT SOM would rank far higher on my list than several institutes outside the top 10.

Symbiosis, it appears, declined to volunteer information - although it has given an ad in the issue. They're smart enough to know they cannot repeat the no 4 ranking achieved in the Business Today survey.. so better to not be featured at all than explain an inglorious tumble.

Also, there is a separate feature on ISB, there is no mention of Great Lakes. I guess in times to come 1 year programs will be included in rankings as a separate list.

So what would I do as a b school director?
1) Add international linkages - exchange programs for both students and especially for faculty. That's one area MDI has absolutely cracked - it has a clear 70 point lead over rivals like XL and SP and all IIMs except A, which is almost equal.

I also think the ranking of the institutes you tie up with for exchange progams should be taken into account in some manner. Otherwise the parameter could lose its meaning.

2) Get an international accreditation. It's not easy, of course but MDI scores here again, with both Equis and AACSB accreditation.

3) The one thing you can buy with money is infrastructure - buy it. Most b schools are doing it in any case as the 2006 business school ratings of the All India Management Association (AIMA) published in Business Standard notes.

However, going forward we need to ask some questions: if a laptop for every student is fast becoming a norm, need we list computer: no of students ratio as a parameter?

And well, I could go on and on. But suffice it to say that if the recent Business Today b school ranking got an F, the Outlook survey gets a passing grade - but not distinction. Some of you may think I'm being too generous but I feel, taken in entirety, the rankings and the accompanying articles provide some perspective to the current b school scenario.

IIMs pe gussa kyun
I do wish, however, that Outlook would stop making statements like this:

Experts agree that while institutions like IIMs played a big role in raising the standards of management education and curricula, they gave little thought to the creative use of ecology on campus and connecting the students with nature. The new-age business schools have stepped in fill that void.

Evidently, the writer has not visited an IIM campus!

Then there's the anguished "Dalit students still get a raw deal":

...Students belonging to the SC/STs, who pass out of premier institutes like the IIMs, are still at the bottom of the heap when it comes to remunerations...The average salary for Dalits is at least Rs 2 lakh per annum less than the institute’s average and normally a Dalit is the recipient of the lowest salary offered at the IIMs. For instance, while the average salary for all students at IIM-A was Rs 9.7 lakh, the figure for the reserved category students was Rs 7.8 lakh.

So what is the point being made? That the highest paid jobs should also have quotas for reserved candidates? The article concludes that the differential is mainly attributable to lack of soft skills. But as a Dalit who graduated from IIM L points out:

Although IIMs offer special sessions for Dalits to tide over these problems, Doss admits that in an extremely competitive environment, there is a stigma attached to attending such remedial sessions, and most Dalits choose to give it a miss.

One question I would like journalists to ask is whether private b schools - on their own - are making any efforts to add diversity to their classrooms in the caste context.

If they can claim to emulate Harvard or Wharton in other areas -how about this one? 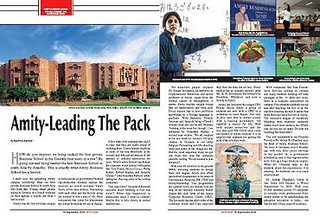 And finally, only Outlook would have the guts to acknowldge this error: a 2 page 'ad' by Amity cleverly disguised to look like two regular pages of the magazine. And its placement at the very beginning of the survey story makes it all the more misleading.

The following clarification has been published on their website:

On pages 28-29 of Outlook magazine dated 18th September 2006, there is an advertisement titled ‘Amity – Leading the pack.’

This is a paid advertisement released by the Amity Business School, Noida which was carried inadvertently. This, in no way, represents Outlook-C Fore survey.

The Amity Business School, Noida is not amongst the Outlook – C Fore rankings and, in fact, wasn’t included in the survey. The school has been refused approval by the AICTE which has been challenged in the courts. Right now, the matter is sub judice.

We regret any confusion that the advertisement may have caused to our readers.

The clarification will be carried in the next print issue as well. And for that sincerity, so rarely seen in a big media house, we must be grateful!
Posted by Rashmi Bansal at 8:25:00 PM