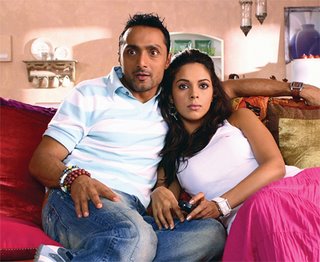 This morning I had no idea who Saket Choudhary was. Now, I bow this rocking young writer-director. Pyaar ke side effects is yet another film Bollywood should be proud of. A truly modern and witty take on man-woman relationships in yuppie India.

Perhaps faintly inspired by a couple of Hollywood films but on the whole so very fresh and original! So who is this Saket Choudhary? Well, the only info I could dig up on him is that he co-wrote Santosh Sivan's Asoka (a film I could barely sit through).

That was in 2001 - God knows what he was doing for the last 5 years. Perhaps biding his time, waiting for his talent to be recognised... And hats off to PNC for putting faith in him.

Right from the little Delhi vs Bombay jokes to the odd collection of friends and sidekicks (great casting!), the film manages to ring true and yet entertain. Commitment phobia is not a new theme - several recent Bollwyood films tried to explore that theme - but they fell flat. Remember 'Home Delivery'... and worse, 'Neal and Nikki'?

The plot
Sid (Rahul Bose) is a DJ playing at Trisha (Mallika Sherawat's) wedding.Witness a scene which goes something like this :

She decides to go back and they exchange goodbyes. A few minutes later she is seen running past Sid and friend Nanu, even as she assures 'taiji' on her cellphone: "Main paanch minute mein aa rahi hoon.|"

And that's the tone throughout - comedy without slapstick, questions and issues minus self importance or gravity. Although Trisha is a central character, the whole film has been written from the guy's point of view... And that makes it different and interesting.

Pyaar ke side effects include 'marriage' - that's what Trisha wants after she's moved to Bombay, met and fallen in love with Sid... 3 years after her original flight out of the mandap. But Sid is not so sure... yet he agrees. And what follows is Engagement ke Side effects which include the pain of selecting an engagement ring and meeting 'papa'.

Following permafrost conditions from daddy's side and an unfortunate (but funny)accident on the golf course, the couple breaks up. Trisha starts hanging out with the same guy she ran out on - a 'Vivek Chadda' looking Jas Arora - while Sid has coffee conundrums with 'Baby doll vol 3' (an item girl played by Sophiya Haque).

There are some side plots - the hilarious roomie Nanu (Ranvir Sheorey) who hates changing his underwear and thinks the fact that superheros never marry is a good argument against the institution of marriage as a whole. Then there's Sid's sister
(Taraana Raja) and brother in law Kapil, Nanu's kooky girlfriend (Sapna Bhavnani) and a wooden chest.

A scene in a club where Sid, Nanu and Kapil are hanging out after the break up is particularly funny.

All the actors were excellent in their parts, of course there are kisses - including one underwater - but Mallika is very believable in her single-Mumbai-chick role. The fact that she is taller than him, earns more than him but still loves and wants to marry him is a new and refreshing representation of a woman in Bollywood.

So, what's the verdict?
Almost all reviews I've read say the ending's a farce and give the film around 2 stars. But I thought it was all pretty cool and so, without nit picking and fault finding - because I enjoyed the movie and am pretty sure you will too - I give PKSE 4 stars. Do watch it!

And Saket Choudhary - he is definitely a guy to watch out for!
Posted by Rashmi Bansal at 4:14:00 PM