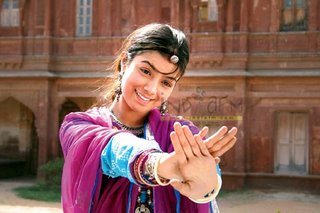 Have you ever seen a film which your head says is 'good' but your heart does not embrace? Dor is a film which did that to me.

The story is simple but intriguing enough. Two young men go to the Gulf on work, leaving behind their young wives. The unforeseen happens... Shanker Singh topples (or is pushed off?) the balcony of the house they share. Aamir is convicted of murdering him and sentenced to death.

But under Saudi Arabia's Sharia laws, Aamir's wife Zeenat has a ray of hope. If Shanker Singh's widow 'forgives' the accused and signs a maafinama, his life can be spared. The film is about Zeenat's search for the wife, knowing only that she lives somewhere in Rajasthan. And on the basis of a single picture.

So yes, the story is 'different' but... It's somehow unconvincing. Zeenat is 100% sure that 'mera Aamir aisa nahin hai' - that Shanker's death was a 'haadsa' and not a murder. But we never know, really.

That's the big issue - there are smaller ones as well. For instance, since when did widows in Rajasthan wear dark blue clothes? I always thought they wore white! In fact, the clothes Meera wears after Shanker's death resemble a burqa more than anything else... and this seemed odd to me throughout the film.

I also felt that for the first time Nagesh Kukunoor has made a film which got caught up in exotic foreigner-friendly locations. That the backdrops got more importance than the struggle of the characters themselves.

And honestly, I wish he would at best make a cameo appearance and not actually play a part in every film. At the very least, he needs to lose that Hyderabad-meets-Hudson accent!

Gul Panag as Zeenat is an excellent choice but someone other than Ayesha Takia should have played Meera. She is not bad, but not all that great either. Shreyas Talpade plays a 'bahrupiya' and his role is to add some lighter moments to an otherwise ekdum serious film.... So serious that the lead actresses don't even wear any make up. Shreyas has performed well.

Actually, 'Dor' reminds me of the kind of films which were made in the 80s and dubbed 'feminist'. Zeenat comes to Meera to ask for her help, but ends up liberating her. Convincing her that her life is hers alone to live and that she must make her own decisions.

And yet, unlike Iqbal, you can't feel good at the end of it all... So watch it if you will, I just can't recommend it too strongly.

P.S. Also releasing today isKhosla ka Ghosla. The film gets 4 stars from JAM - read the review here.
Posted by Rashmi Bansal at 9:32:00 AM