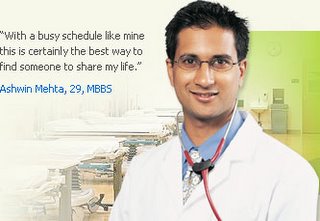 So far so good. HT reports that "online matrimony in India is becoming one of the fastest growing businesses, with a growth trajectory of as high as 90 per cent annually in some cases".

According to an Internet and Mobile Association of India (IAMAI) report on Matrimonial Search... in the fiscal year 2005-06 these services garnered Rs 58 crore, in the current year the amount is expected to cross Rs 98 crore. There has also been a surge in member subscriptions from 4 million in 2004-05 to 5.5 million in 2005-06. Membership is estimated to grow to 7 million users by the end of this year.

Several of these sites have received funding and now advertise on TV. Along with wider choice and more control to the actual bride/ groom than the traditional route or parent-centric newspaper advertising, some sites claim to be offering additional services such as profile screening. Not sure how they do this - and is it for the premium memberships only?

That said, my sole experience with online matrimony was registering a profile for a cousin whose parents were like, "Chalo yeh bhi try karte hain". But online matrimony is something you have to take charge of yourself. Responses started poured in but my cousin was painfully shy and did not wish to trawl through the humongous number of emails. I mean, she'd rather someone else did the dirty job for her.. which really does not work.

Online matrimony is a project just like offline matrimony. It requires considerable time, energy and capacity to reject/ accept rejection.

Another friend who got divorced some time ago put up her profile on a few of these websites. Her complaint is that guys are way too 'chipku' for her liking. "You exchange a couple of emails and a few phone calls and next thing you know the guy wants to fix a date to get married", she says.

After one marriage that ended painfully, she would rather get to know someone a little better than jump into another potential disaster zone. But the guys in their 30s who would respond to her profile are in a hurry to 'settle down' and don't seem that picky!

Of course the opposite attitude seems to prevail on 'dating' sites. Most guys on those sites are looking to have a good time ie get sex and do not hesitate to say so in their very first email. As if.. that turns on women. Especially when it's done with complete lack of style.

An interesting experiment was carried out by HT's Brunch supplement a few Sundays ago. One of their staffers registered two profiles on a dating website. One was an 'adventurous, fun loving, 'wants to live life to the fullest' type' and the other a more staid description.

Profile 1 was flooded with response (the sex variety) while profile 2 got barely a trickle. And a male journalist who registered his profile got.. absolutely no response.

Reminded me of my experience with starting India's first dating column back in 1994. 'Saturday Date' was a column I started in the 'Metropolis on Saturday' which featured profiles of young professionals who wanted to meet interesting people, but not necessarily get hitched right away.

The column only featured 4 profiles at a time - many were friends who were persuaded to try out something new. Response mechanism for the guys was simple: they printed their telephone numbers. For the girls, respondents had to write in, c/o the newspaper's address. I would actually screen them - chuck out the 90% rubbish that came in and hand over just a few decent/ interesting ones (rarely did you get both together!) to the girl in question.

And yeah, in the line of duty I too went on a couple of dates. Got bored out of my skull... but I guess someone may have found someone. And now, with technology enabling a far higher degree of pre-meeting communication, surely the 'success rate' is much higher!

The biggest problem
Back then, and even now, the success or failure of a dating/ matrimonial site hinges on one simple fact: how many girls are registering?

I think the 'open-to-dating' women have enough choices in real life, when they are in the college-age bracket. The trouble starts when you finish your education and into your second job by which time you may have a limited social life and little opportunity to meet new people. That's when they turn to matrimonial websites.

So dating sites suffer from an awful girl: guy - I think 1: 10 would be a fair estimate. Matrimonial sites, according to IAMAI stats have a gender ratio of 69% male, 31% female, which is far better.

But surprisingly, 37% of registered users on dating sites are between age 18-25... so I am guessing they are actually using it for dating purposes. But perhaps the 'matrimonial' purpose of the website cues that 'I am not that type of girl/ guy'. As in I may eventually wish to marry you.

What I did not understand however was this startling statistic:

Um... iska kya matlab? Why are only 63% of the people on a matrimonial website UNMARRIED? Yeh married with kids/ without kids ka chakkar kya hai?

And even if there were married types looking for someone to fool around with - or marry again - wouldn't they be more likely to masquerade as being 'unmarried' in the first place? So where and why this data is captured remains unclear.

The only plausible explanation is that these are uncles/ aunties/ didis/ jijajis of prospective grooms and brides. People like me, searching for other people. But still.. it creeps me out.

Will someone from the matrimonial industry please explain?
Posted by Rashmi Bansal at 7:54:00 PM