Deepa Mehta's 'Water': 4 stars and no, it's not derogatory! 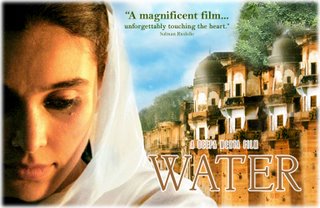 The DVD of Deepa Mehta's 'Water' arrived at my office a couple of weeks ago. But I just did not get around to seeing it. To be honest, I had the impression it would be a grim and depressing film on a meaningful subject. Something you rarely get 'in the mood' to watch.

I was wrong. 'Water' is a stunningly beautiful film, sensitively shot and well acted. Yes, the plight of widows sent away by their families to lead a colourless and hopeless existence in ashrams is a sad one. Especially that of the 8 year old child widow who does not even remember getting married. But it's a tale well told, and conveys a message without being a 'message film'.

Art without being arty, which is truly rare and wonderful.

The story in brief: Chuhiya is a little girl who finds herself 'widowed' at the age of 8. As per the traditions prevailing then (the film is set in 1938), she is sent away to a widows' home in Benaras. Her arrival stirs something in the inmates of the home - most of whom came there at about her age and saw their lives pass by, unfulfilled.

Particularly poignant is the old lady who keeps dreaming of eating laddoos - the last time she had them was at her own wedding decades ago. Apparently widows were not even allowed to eat 'fried foods' like halwa, puri or jalebis...

But this is no bleak house, thanks to some memorable characters. Madhu didi is the old and hypocritical 'ruler' of the house. She has no qualms in sending out the young and beautiful Kalyani (Lisa Ray) to sethjis who pay for use of her body. In Kalyani Chuhiya finds an 'older sister' like figure and although Madhu didi claims 'hum bhi aap ke amma jaise hain', the mother figure for the little girl is actually the silent but strong Shakuntala (Seema Biswas).

Enter Narayan (John Abraham) - a young man who has just completed his law exams and is deeply influenced by the teachings of Mahatma Gandhi. Including the idea that widows can and should remarry. He meets and falls in love with Kalyani, and offers to marry her. Shakuntala rebels against tradition and liberates Kalyani from the ashram to pursue her love. But life is not so... beautiful or fair.

Without giving away further details let me just say that all does not end well and yet the film concludes on a hopeful note.

Living upto its name, water is almost like another character in the film. I especially liked the way Narayan used the poem 'Meghdoot' by Kalidasa to express his love for Kalyani.

Also interesting is the attachment inmates show towards pets (Kalyani and Chuhiya to the dog Kaalu, Madhu didi to her parrot). A beautiful way to depict how every human being needs to love and be loved - by someone. 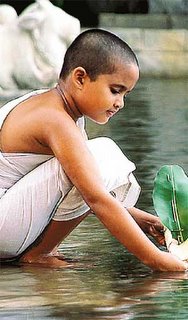 Sarala - the little girl who plays Chuhiya - is absolutely amazing. She is innocent yet unsubmissive.

There is scene where she is asked to stand on top of Madhu didi, pressing with her little feet the old lady's creaking bones. The hijra Gulabo (played by Raghubir Yadav) offers her a puri. Madhu didi snaps,"Widhwa kab se aisa khana khaane lage?"

The angry little girl blurts out that she will eat as much puri as her heart desires in Kalyani's wedding. The old lady declares such a thing can never happen. The little girl insists it will and jumps up and down on the old lady, screaming hysterically. The effect is very powerful.

However in this - and many other instances - a lot is lost to a non-Hindi speaking audience because of the poor sub-titles.

Lisa Ray as Kalyani is also extremely good. She has been to acting school since her last movie and it shows! You might argue she is too refined and too much of a china doll to play the character but except for her Hindi sounding faintly accented now and then I thought she was perfect.

In sum, a movie worth watching. Made with passion, perseverance and against all odds, I give it 4 stars. And yes, you can hope to see it at your local theatre soon... Or can you? While 'Water' is set to release in India shortly I am sure there will once again be problems...

The controversy
'Water' was originally to be shot in Benaras in the year 2000. Protests erupted and a mob destroyed the film set, charging that the film depicted Hinduism in a poor light. This was after the script was cleared by the I & B ministry. So it was more like in-principle opposition to the idea of the film, that too being made someone who had already raised the hackles of traditionalists with 'Fire'.

Although the NDA government declared filming could go, they created bureaucratic hurdles which actually made it impossible. It was a harrowing and financially devastating experience for the film unit and the director, personally

Although the governments of West Bengal and Madhya Pradesh offered Deepa Mehta blanket approval to film in their states, she chose to pack up and put the film on hold. She explains the decision in an interview to Movieweb:

I said I really didn't want to do it until I stopped being angry, because I was so upset and so disturbed by what had happened... It took about 5 years for that anger to dissipate. Once it did, it didn't take very long to put the film together again. There was no way that we could shoot it in India because we couldn't get insurance. So we decided to shoot it in Sri Lanka.

Yes, that accounts for the strange sight of palm trees swaying in the distance in otherwise believable sets of the Benaras ghats. But given the circumstances, I won't quibble about that!

I think it was important for this film to be made - for reasons of creative and artistic freedom. And it turned out better for going through this trial by fire. The original cast - Shabana Azmi, Nandita Das and oddly enough Akshay Kumar - had to be changed. But knowing that, not for a moment do I feel 'oh, they would have been better'.

Deepa Mehta herself acknowledges she grew and changed over the period. Hence while the script remained the same she changed her approach. She let the camera and actors convey emotions and relied less on dialogue. Which was a very smart thing, cinematically speaking.

The question remains, is 'Water' derogatory to Hindus and Hinduism? Quite the contrary!

I am an Indian, a Hindu and a woman. As I watched the film two thoughts crossed my mind:
a) How lucky I am to be born today, and not 70 years ago
b) How much India has changed - and mostly for the better - since the period depicted in the film.

In fact the film made me feel positive about being a Hindu and a woman. Because in the span of about 3 generations we have been able to institute major and sweeping reforms in our society.

This is of course most true in educated and middle class homes - here widows lead fairly normal lives. They do not tonsure their heads or even wear white. And remarriage is not uncommon.

No doubt ashrams for destitute widows exist, and on many fronts, women still get exploited. Yes, child marriage continues but there is progress - the statistic is 1 in 18 in Rajasthan - the state with the highest prevalence. And technically, child marriage is illegal.

I wish that somewhere Deepa Mehta had acknowledged this fact. She ends the film with the statement:

"According to the census in 2001 there were over 34 million widows in India, many of them still living in conditions of social, economic and cultural deprivation".

There is more than a grain of truth in that - but the truth is multi faceted. It's NOT 1938 any longer. A line from the film maker stating the fact that child marriage is an illegal and declining practice, and 'child widows' like Sarala more uncommon than the norm, would not have hurt anyone. And surely enlightened a few.

Here's the line she takes in most interviews anyways.

Child marriages are illegal in India these days. That's why film is set in 1938 –there were child marriages prevalent then. Child marriages go back to 11th century, to Mongolian invasion – they would not rape or pillage women or youngsters that were married. So parents got their young children married, and it became part of the culture.

So you see, it's not all about religion anyways. A lot of our rites and rituals had a basis in something, then that basis was forgotten but the rituals continued. Especially those which were convenient.

As Narayan explains in the film..

When widows are segregated from their husband, family and property, they are: “One less mouth to feed. Four saris saved. One bed and a corner are saved in the family house. There is no other reason why you are sent here.” And while the treatment of widows is disguised as religion, he concludes, “it’s all about money.” These few sentences illuminate the situation in an extremely powerful manner.

How wonderful to belong to a religion which is not afraid to look its scriptures or traditions in the eye and say,"That commandment does not make sense for us anymore"!
Guided by their conscience and exposure to new ideas and ideals, the likes of Raja Ram mohan Roy had initiated reforms in Hindu society, decades before Gandhiji.

The lack of a 'single holy book' means that we Hindus can be more flexible and also re interpret what tenets to follow and which to drop by the wayside. If only other religions were that 'thinking'!

Explaining the significance of the title 'Water' Deepa says:

Water keeps flowing but stagnant water creates problems. Many people in the film, which is set in the late 1930s, lived a rigid life as prescribed by a religious text more than 2000 years old... Traditions should never become rigid. They should flow like the good water.

So when the guardians of the faith start their protests - and I know they will - I would ask them to instead direct their energies to completing the process Raja Rammohan Roy and Mahatma Gandhi set into motion.

That would be the greatest service they can perform towards the cause of Hinduism.

Thanks to Lauren Kozak, Senior Manager (Online Marketing & Influencer Outreach) at M80 for couriering me the DVD of Water from LA.
Posted by Rashmi Bansal at 10:21:00 PM