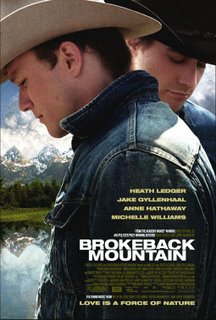 Two blokes have a boring job eating baked beans and tending sheep on top of a mountain. One is strong and silent, the other dandy. On a particularly cold night the two find themselves in the same tent. Stuff happens.

My question is:
a) Do the two cowboys become gay because of lack of entertainment options? This is similar to the question that came to my mind after watching Deepa Mehta's Fire. Do people become lesbians because they have sick and abusive husbands??

This would imply that being gay is not pure biological disposition but also a matter of choices made under circumstances. That stuck on a mountain, far from society's prying eyes and with no other human company anyone might indulge in a same sex physical affair.

b) The fact that the affair continues long after means the cowboys weren't gay by accident but inherently so. At several points in the film Jack (Jake Gyllenhall) implies that he and Ennis (Heath Ledger) could have had a great life together on a ranch somewhere. Instead of meeting just a couple of times a year and making do with some 'high altitude f****.

A large body of research has shown that - with heterosexuals - the hormones which produce the 'high of love' last only 18-24 months. And that is why many humans flit from partner to partner in search of that initial feeling.

Why would it be any different for a gay couple? Here, the fact that Jack and Ennis see so little of each other might be the thing keeping their passion alive. If they were to actually live together, might not things change and sour - like in the regular man and wife relationship?

Also it's not clear what the relationship is about - besides sex. Given that men and women are always moaning that 'we are so different and don't understand each other', does that problem get solved with same sex couples?

Anyhow, I am no expert on this subject. But I don't agree with the experts who've put Brokeback Mountain on a pedestal. It a strictly ok movie.

The first half an hour almost put me to sleep. The two men mumble some dialogue on screen which you have to strain hard to hear (yaar subtitles hi daal dete!). Things improve a bit as more characters enter.

The predicament of Ennis' wife is particularly hard hitting. She realises pretty early on that her husband is not catching any fish on his fishing trips with Jack Twist. The scene where she confronts him - years`later - is one of the best in the film.

So, Ang Lee got the Oscar for best director. I guess he deserves it just for being to portray a subject like this without inducing puke from the audience. Showing two men kissing in an 'artistic' manner does take a high level of artistry.

Apparently, after the release of the film a number of 'brokeback marriages' have come to light. A New York Times article notes that an estimated 1.7 million to 3.4 million American women were once or are now married to men who have sex with men.

Which is why I think the film touched a chord in that country. I am sure there are similar cases in India - but not at that scale. Yet.

So go watch the film just to see what the fuss is all about. And for the beauty of Brokeback - not the metaphor but the mountain itself. The old nature vs nurture debate takes on a whole new 'meaning' (the spectacular scenery which might put anyone 'in the mood' :)

Naturally, what's shown on screen is making many people - men, especially - squirm in their seats. But are they all getting grossed out by two men making out, or are some feeling uncomfortable because they're NOT feeling as grossed out as they think
they should?

In the United States during the 2004 elections, exit polls indicated 4% of all voters self-identified as gay or lesbian. Plus, you have bisexuals. If human beings really are 'similar', if homosexuality is not a cultural thing that means we have a large, large number of people here who are either not aware of being thus inclined or not acknowledging it.

And that, may be the real genius of Brokeback Mountain.

As I skimmed through Mumbai Mirror this morning I realised film maker Rituparno Ghosh and I had pretty much the same reaction after watching Brokeback Mountain! He didn't like it at all...

He commented: "The director was apologetic about his protagonists' mutual attraction. The idea seems to be, ‘Look they aren't gay. But when two heterosexual males are thrown together in solitude, love may happen’. I found it contrived".

Yehi to mera point tha! The central relationship between Heath Ledger and Jake Gyllanhall did not work for Ghosh.

"The ambience was too pretty and it took away from the central relationship. Given a choice between the shots of nature and the human bonding, I preferred the former... Sanjay Suri and Purab Kohli in My Brother Nikhil were able to convey so much more without physical intimacy".

So it's not about being pro or anti gay. Sometimes a movie doesn't work for you. And this was one such time for both me, the Saturday night moviegoer and Ghosh - a seasoned director.

My other observation about the attraction remaining strong because they meet so rarely also applies to heterosexual couples. Often, illicit affairs give that kind of high - simply because two people don't spend quantity time and discover the bad side of each other. And the 'forbidden fruit' is always exciting!
Posted by Rashmi Bansal at 10:17:00 AM