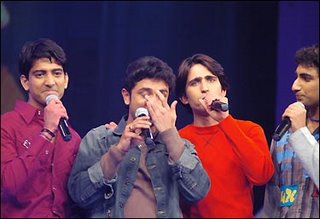 History repeats itself, so why not reality shows... After drama, controversy and walkouts spiced up viewer interest in 'Sa re ga ma pa', Indian Idol 2 had no choice but to follow.

Ameya Date, one of the guys expected to make it to the finals was voted out earlier this week. And his 'fans' protested loudly both on the show and off it. Once again, questions arise about the sms voting process. Here's what I wrote about it in my column on sify.com:

Indian Idol's voting process is not designed to eliminate the 'worst' singer. Instead, viewers are asked to send in votes for their favourite singer - like in a popularity contest.

You might say it's one and the same thing - that the person with the least number of votes is eliminated and that's fair. But think about it more closely and you'll see that the 'elimination' approach may well produce a very different result.

The 'popularity' method often attracts people to vote for all the wrong reasons. As in the case of 'Sa re ga ma pa', it could be a case of regional/ home state voting. Or just a case of people getting obsessed with a particular personality whom they will support regardless of the quality of his/ her singing - as happened with Qazi on Fame Gurukul.

And it's not a problem peculiar to India alone. Commenting on the voting pattern on American Idol on MSNBC, Linda Holmes writes,"People don't really care about the performances week to week. They treat "Idol" like a horse race. Pick your horse, bet on your horse, cheer for your horse. And, in some cases, carry your horse across the finish line. Above all, tolerate no suggestion that your horse has shortcomings.

He acted like a jerk? He's misunderstood! He sang badly? He has a cold! He has irritating, cloying, obnoxious mannerisms? That's what you love about him! No one understands him! Everyone is jealous of him!"

She goes on to observe that people love geeks, underdogs, losers. And they love everyone who is picked on by Simon Cowell.

Well, we saw that kind of thing happen here as well with Ravinder Ravi - the painter from Ludhiana - getting votes week after week in Indian Idol 1, despite his atrocious singing. Conversely the people who are perceived as 'smart' and 'good singers' often don't get votes because:

a) The average not-so-smart and talented bloke who comprises the mass of voters does not identify with that person
b) The rest think woh to itna accha hai, usey meri vote ki zaroorat nahin. With the result that a deserving singer loses out!

Of course this format suits the makers of the show. Had they asked viewers to vote out the worst singer they would have gotten far fewer smses. There's more passion - and revenue potential - in supporting your favourite!

The other interesting phenomenon in the Indian context is that women don't seem to fare too well in reality shows. Again, from the sify column:

Indian Idol host Mini Mathur hit the nail on the head when she wrote in the Indian Express, “While a male contestant is judged on his vocal talent and the 'X' factor, for a girl, the audience will also note whether she's wearing too much or too little, got attitude, if her hair is too straight, or whether her eyebrows are plucked."

The girls certainly think appearance can make or break their chances. In the previous Idol season, when Prajakta and Aditi wore Western outfits they emerged at the bottom of the pile. Apparently from then on, they stuck to Indian clothes....

In fact, after Idol contestant Meenal's performance Farah Khan observed: "Because she's good looking and sang a song that's unusual and sexy, she probably won't make it." And she was right! At the semi-final contestant stage, Idol 2 turned into an all-male contest.

Venkat Iyer wrote in with an interesting theory on that front...

I wanted to share my observation with you on why female participants are not getting the kind of votes that males get despite being equally talented. I think Indian TV shows such as Indian Idol are watched by many more females than males. That directly translates to a greater female vote bank that votes on these shows.

Guess who the females are attracted to? The males. I feel more convinced about this especially after reading that female participants got fewer votes when the wore western attire. If men were voting, the result would have been different.

I'm sure gender-wise viewership data is available... Shall certainly try and lay my hands on it.

As for Indian Idol 2, I think all this is too little, too late. Better luck next time, Sony!
Posted by Rashmi Bansal at 6:41:00 PM