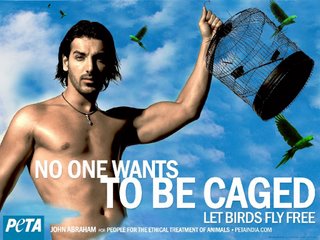 I may not agree with everything they say, but I do admire the way in which they say it. PETA - People for the Ethical Treatment of Animals - are probably the most PR savvy activist group on the planet.

They have a fairly constant message - be kind to animals, don't eat them or wear them - but they find a way to put across that message in a compelling manner. Time after time after time.

Sure, part of it is smart use of page 3 people. Aditi Govitrikar dressed in lettuce leaves, John Abraham bare chested - but practically every communication the send out is eye-catching and interesting enough to get printed, especially in daily papers with supplements to fill up.

Even their non-celebrity communication is imaginatively done. Here's a still from their current international campaign about 'KFC torturing chicks'. Instead of showing dead chickens (killed, PETA says, by inhumane methods such as live scalding, life-long crippling, and painful debeaking), the campaign features a human chick braving the bitter cold to stand up for her non-human counterpart. 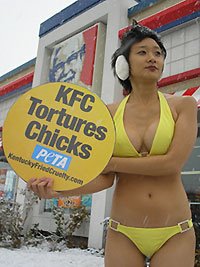 "Volunteer activists have been battling freezing temperatures and extreme weather wearing nothing more than yellow bikinis and earmuffs to proclaim, "KFC Tortures Chicks," in front of KFC restaurants across North America."

No, you won't be seeing bikini clad women outside KFC stores in India... Instead PETA India came up with a "Cupid chicken" who stood in front of KFC restaurants before Valentine's day carrying a sign saying, "Have a Heart for Chickens, Boycott KFC!"

What's more PETA is always quick to grab on to any topical opportunity. Check out this amazing Cheney inspired t shirt!

PETA on the web
It goes without saying that PETA is extremely net-savvy. The mother site is a repository of information, but again not dull or boring at all. They have features, videos, factsheets, all the ad campaigns, a media centre and even shopping.

But here's the fun part - PETA has dozens of websites devoted to different causes. Such as CowsAreCool.com, FurIsDead.com and GoVeg.com. 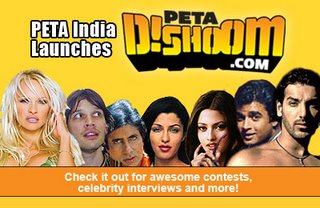 That would explain why PETA India, which has a pretty cool website already, would launch a second site. This one is called petadishoom.com and aimed at the youth. Yup, the issues are the same but it's much funkier in terms of both design and content. PETAdishoom has contests, and sections like Fashion, Foodie and Campus which give gyaan on how to live a cruelty free life. And it's all really well written and interestingly showcased.

But like I said at the very beginning, I don't agree with all that they espouse. The 'Vegan' way of life, to be specific.

I have been a vegetarian all my life. Yes, I was born into vegetarianism but chose to stay that way. And I am bringing my daughter up as a vegetarian - though she is free to change her mind at a later date.

In India, being a vegetarian comes naturally and easily. You don't feel 'deprived', because there are plenty of wonderful veg things to eat. And it's no big deal because it's so common - you don't stand out as someone who's made a deliberate ideological choice.

Like many vegetarians I do eat egg, but not on an everyday basis. In fact, if someone asked me to give up egg altogether I would not mind. Of late, I am in fact quite unenthused by omlettes. To be honest, I find they 'smell'.

But milk? Cheese and butter and paneer? I can't imagine life without ALL of those things. The life that PETA wants a true vegetarian to live. The idea of going 'vegan' is so alien it sounds like living on another planet (Vegan distinctly reminds me of Dr Spock on Star Trek!)

Of course PETA runs a complete website on how to live life dairy-free. And on PETAdishoom they even list things you can buy in India which are 'vegan' .

You can even eat out. Like at Smokin Joes , says PETA: Try any veg pizza without paneer and cheese.

Aaaaaaaargh! I'm afraid I shall remain meat free but milk-friendly for the near future.

PETA India says "milk in India has also been found adulterated with gross things like earthworms and urea". But the thing is every fruit and vegetable in this country has some grossness attached to its existence....

And who's to say who's 'right'? TheJains go so far as not eating root vegetables like onions and potatoes ostensibly because it might kill tiny living creatures. But they never had a problem with milk.

That's because in the past Indians did revere the cow. Today it is the butt of jokes - the whole 'do not kill the cow, let her wander on the road' thing. But there was a time when every household had a cow, she was worshipped by Hindus as 'gomata'.

The first rotis from the kitchen were 'gai ki roti' - I remember my grandmother would give them to us kids to feed to any passing cow. Um, not in Bombay this was in my native place, of course.

So the deal was we treated the cow well and she gave us milk in return. No exploitation, a mutually beneficial relationship.

No doubt modern dairies do not follow those practices. But can't we look at more humane milk - rather than give up milk altogether?

But it has worked...
One final point about the 'effectiveness' of PETA. Sometimes, given the mileage they get, one is tempted to dismiss it as a mere publicity mongering outfit. Or an organisation which is attempting to create education and awareness. Which in itself is a good objective but PETA has achieved far more.

Internationally, PETA's efforts have led to some historic breakthroughs, esp regarding use of animals for testing cosmetics and in scientific labs.

"PETA’s animal protection work brings together members of the scientific, judicial, and legislative communities to halt abusive practices. Such cases, aided by thorough investigative work, congressional involvement, consumer boycotts, and international media coverage, frequently result in long-term changes that improve the quality of life for, and prevent the deaths of, thousands of animals".

The organisation is yet young in India and may not have really managed to impact policy. As regards the ban on performing animals at circuses, for example, I am unsure how much credit goes to PETA and how much to our animal-loving aunty Maneka Gandhi.

Take corporates. Note not a single Indian cosmetic company is listed as 'animal-friendly' or cruelty-free on the PETA Dishoomwebsite.

But I guess the only way to change that is to get consumers to demand cruelty-free products. And targetting the youth is the smart thing to do. They are, after all, the ones who are more likely to passionately espouse such a cause.

PETA, being an activist group, do tend to become overzealous at times. But as long as they don't come across as cranks - it's OK. People will get sensitised, pick and choose how cruelty-free they wish to be. And hopefully, even that change in behaviour and lifestyle will have a considerable impact.

Of course, in this country we also have a long way to go as regards the ethical treatment of human beings... But that, is another cause, a whole different story!
Posted by Rashmi Bansal at 12:29:00 AM