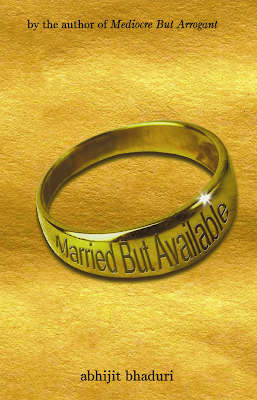 It is always scary to review a book authored by someone you know. What if you don't like it at all? I guess you just keep mum and pretend the courier lost it :)

Thankfully, Abhijit Bhaduri's 'Married but Available' requires no such white lies. This book is part 2 in a 3 part series and although I haven't read the first ('Mediocre but Arrogant') it does not matter. It works as a standalone.

In fact I am relieved to skip part 1 - tired of the slew of books set on bschool campus!

'Married but available' is about Abbey, a middle class Bengali boy just graduated from Management Institute of Jamshedpur or MIJ. Abbey joins Balwanpur Industries as Personnel Executive and this is both the greatest strength and greatest weakness of the book.

The fishbowl world of Balwanpur is fascinating. It is one of those integrated townships which has 'everything', even its own cinema hall. Well, everything except privacy.

The manner in which Abbey learns to deal with worker issues - ranging from cable TV telecast times to a cockroach in the food is quite enlightening. It's all about winning their hearts by using your mind. An incident involving breeding of snakes is particularly bizarre!

But like I said this township is also the book's weakness because no one who's graduated from a bschool in the last 10 years will relate to working in such a place. Which means a substantial audience lost :)

The book also touches upon what is a red hot issue today - layoffs for workers. Whether in a factory or in a white collar office the concerns remain the same. It is NEVER easy. The way Abbey deals with it he manages a win-win situation.

There are also some insights into working with foreigners (although today I guess they are hardly the strange new animals they were in the early 90s). And of course lots of gyaan from the likes of Captain Sobti, Rusty Rascal and Father Hathaway.

At times it gets preachy but real life mein bhi hota hai. The seniors who never stop sharing their pearls of wisdom.

The less compelling part of the book was the 'married but available' angle. Let me not spoil it by revealing the story but it's a case of marrying the wrong person because she was available. And of course complications follow. But since the main protagonist is a guy his solution is to become 'comfortably numb'. Which means the reader does not feel much for him either.

There is a part 3 in the making which I'm guessing will 'resolve' all the issues.

Overall, I think this is a good book for anyone who:
* is a young manager and esp those planning a career in HR. Context may change but issues remain the same.
* enjoys reading yuppie-lit ie books about People Like Us.
* looking for a quick breezy read - nothing too deep.

Incidentally I saw 'Married but Available' at no 5 among best selling fiction books at Crossword in Bandra. Lagta hai acchi bik rahi hai! I don't think book 1 got much display or distribution...

You can check out Abhijit's website for more
.
published by Harper Collins, Rs 195
Posted by Rashmi Bansal at 8:58:00 PM