Nach Baliye : Star One does it again! 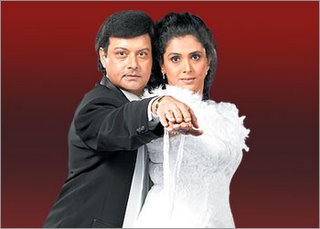 Nach Baliye was promoted as the 'Next Big Thing' on Star One and holy cow - it seems to be working.

Unlike Indian Idol and Fame Gurukul this reality-cum-talent show format appears to be an original idea. As the official website notes:

Nach Baliye is a show that brings two unique things to Indian television:
1. The competition between real- life couples (all from the television world)
2. The participants competing on a skill, they are not known for (none are professional dancers)

I would add, the show brings out how far folks will go to win prize of Rs 50 lakhs. So over the last week we had the 'comedy round' where Rajeshwari and Varun Badola gave an outstanding 'role reversal' performance.

A sporting Varun donned ghaghra, choli, chotis et al to play the woman while Rajeshwari played the man - their performance floored both judges and the audience!

Why it all works
The real-life couple bit was, I think, a masterstroke. Real life couples have emotions between them anyways hence they hug cry on camera without inhibitions. Or any kind of 'distance'.

The whole idea of the new generation of 'reality' shows is to create an 'emotional infection'. While the characters in a soap opera act and evoke emotions, reality shows set up a showdown of some kind which induce emotions, spontaneously.

In Nach Baliye, for example, it's the long drawn out sequence on Thursdays where couples are asked to move one by one into the 'suraksha chakra'. Those who make it to the next round are relieved and happy, while those left behind start looking tense and even tearful.

The suspense stretches on and on before the results are finally announced - just to add to the anxiety of all parties.

Of course, the judges also add the 'emotion' element to the contest with their sometimes-outlandish behaviour (Saroj Khan got up and gave what looked like a 'paanch sau ka note' to Varun and Rajeshwari, and their choreographer. Why? Because that's what her guruji used to do when she gave an outstanding performance!).

'It could be me'
The other master stroke by the producers was the inclusion of some older couples like Sachin-Supriya and Archana Puran Singh- Parmeet Sethi. The viewer was not expecting much from them, so when Sachin and Supriya put up a dazzling performance in the first two rounds it came as a pleasant surprise.

Everyone likes to root for the underdog and a 40+ couple is - in such a contest - definitely just that. The fact that Supriya-Sachin, through their hard work and dedication, managed to pull off such a feat gives some pride and hope to the vast middle aged couple audience . "Dekho ji," you can hear the Mrs saying and abhi-to-hum-jawaan-hai Mr nodding happily.

On the other hand, I don't particularly care for the Archana-Parmeet jodi (for one I think Archana's sticky-stick parrot green and orange outfit in the last episode was just not suiting her age - or less-than-svelte size).

Other points to note
On the cheesy side, the costume designer emplpyed for the compere Sangeeta 'Des Mein Nikla Hoga Chaand' Ghosh seems to have been given one simple brief: friend-of- the-bride-look at Punju wedding.

On a more positive note, the importance given to the choreographers is heartening. After all, they really have a lot of contribution in the success/ failure of the contestants. Right from choice of song to steps to amount of practice! So it's good that the winning choregrapher gets a Rs 20 lakhs prize.

The strangest thing of all was the message flashed before what is ostensibly a 'family' show which read: "This show may be unsuitable viewing for children". OK, so they had something called a 'sensuous round' but if it's really unsuitable then telecast it after 11 pm!

I'm guessing the message was put in just in case some mahila manch type protested 'you are corrupting our children'. But these days things seem quiet on that front - how many channels can those poor souls battle? They've simply given up.

Soap Opera element
On camera, it's all we-are-one-big-happy-family and its-only-a-contest. But after Sai and Shakti were voted out they shared some grouses with Midday:
- Some couples took as many as 5 'retakes' to get their act perfect - isn't this supposed to be a 'reality' show?
- Some couples made a big deal about their 'injuries' and got unnecessary sympathy from the judges(Archana danced with a neck brace, Shilpa with a broken tooth)

Sai and Shakti had earlier alleged that the older couples were being 'favoured' by judges.

Maybe they are just poor losers but, this could be just the beginning. As more couples bow out the bitching might escalate and we might enjoy an added dose of 'reality'. Which, in turn, will probably fuel more enthu among the viewing public to send in SMS votes.

The caveat is that me-too won't work - a Nach Baliye copy for example will bomb. Channels will have to scratch their heads and come up with formats that are interesting and original. And the stakes are high enough now to make that happen!
Posted by Rashmi Bansal at 2:07:00 PM