John Abraham is sitting in a cafe. He puts on a pair of sunglasses. A girl pulls up her chair and sits behind him. Then another, and another. John tilts to the left; the girls tilt too. Then to the right, and so do the girls.

He grins and pulls off his glares. It's an ad for Fastracks' new 'biker collection'. And they pull it off without showing a single bike, which I think is tres cool. Because that would be the obvious thing to do!

What's more, your 'biker' collection now reaches out to a much larger group of people. The message is, you don't have to be a biker, but wear these glares and girls will think you are!

Now of course, whether the glasses sell or not depends on many other factors - designs, pricing, accessibility. But the advertising is just right. A worthy follow up to the original Titan Fastrack watches ad which was quite a hit.

It's also interesting because this is more of a 'brand building' kind of effort - even though it uses a Bollywood star. An effort that a number of companies seem to have simply given up on.

In category 1, lame attempts are made to be 'creative' with the same set of stars. The latest ad with the overused Abhishek Bachchan, for example is 'American Express'.

The Big Idea is AB jr being referred to as 'Big B' because he now has an Amex card ('membership changes everything'). There's not much to be said about that idea, or the small Big B's acting - in the commercial. Perhaps it works anyways, at least in terms of making the Amex profile in India more 'youthful'.

But it's not good advertising.

In category 2, one of the lamest ads on TV right now is Stayfree 'drymax'. I mean, sure, you want users of 'Whisper' to sit up and take notice that there is a better sanitary napkin.

But who leaves a Stayfree on a table, so that water is accidentally spilled... And the napkin miraculously soaks it all up! Do users really need a product demo? I just don't think you build a brand in a sensitive category in this very in-your-face way.

Aside: My 7 year old thinks it's a 'diaper for adults'... Yes, I have given her the explanation, but! 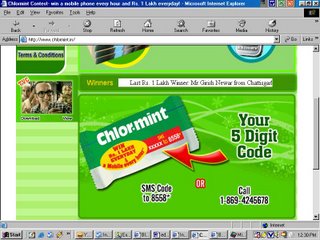 Lastly, we have the 'let me bribe you into buying my brand' variety of advertising. Chlormint, which tried valiantly to be cheeky and cool with its advertising (but did not quite succeed) is going that way.

The irony is that the sms will cost more than the Chlormint... which sells for all of 50 paise (ie 1 cent!). It's clear that some brand manager has done complicated calculations to arrive at a winning formula.

My back of the envelope estimate:

30 crore Chlormints being sold with this offer over 2 months. That means around 50 lakh Chlormints a day. At a conservative estimate 3-5% of users will send an sms. Which would work out, on an average to 2 lakh smses.

The cost of sending the sms varies from Rs 1 to Rs 3 (Airtel users are getting fleeced the most!)Of that Chlormint is likely to be getting a revenue share of 40-50%.

Which means the Rs 1 lakh a day giveaway pays back for itself - at the very least. If the amount of smses or % of people who sms is greater, then sone pe suhaaga. Thoda advertising cost bhi cover ho jayega.

It sounds like a lottery scheme to me, which could possibly get Chlormint into trounle. Because as far as I know, in India, only the government is allowed to conduct lotteries (yes, that's terribly weird and rather unethical but we'll get into that another day).

Besides, I see one GIANT loophole in the Chlormint scheme. The lucky number is printed outside the wrapper. I bet smart paanwallahs and kirana store owners around the country will be busy smsing all the numbers on all the Chlormints they have in stock.

The smartest ones would be smsing from Reliance CDMA, which costs only 15 paise!

And finally, what happens when the promo is over? Coz efforts of this kind don't have a lasting effect. So you're back to thinking of more promos. When you should be thinking about creating products people want to buy. And brands, which stand for something.
Posted by Rashmi Bansal at 12:20:00 PM