New technology is great. But figuring how this technology can actually make a difference to people's lives - and therefore acquire monetary value - is not always easy.

Riya.com is one such fascinating story. A few months ago, I heard of this guy - Munjal Shah - who had developed a 'face recognition' software. It sounded like a cool thing, but I never tried downloading or using or finding out more about it.

I mean I mentally bookmarked it as 'must try one day' because the thought of organising my digital photos weighs on my mind every now and then. But I just never get around to it.

But that was Riya 1.0. Ten months later, this post by Peter Rip of Crosslink Capital (which funded Riya) makes perfect sense:

... we had to have a sound business model... Munjal knew first-hand the mortality rate of dot-coms (and more recent social networking and photo sites) that preceded him. We have one and it will be apparent in due course.

Well, here it is. And what a superb and unique model! Riya has just launched a website called Like.com. 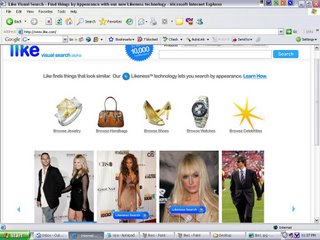 Like.com is the world's first visual search engine. We focused visual search on items that are hard to describe linguistically. Like solves this problem. All you have to do is a "Likeness search" on a photo and Like will show you items that look similar.

And here's the real consumer insight. Millions of people around the world want to buy stuff they've seen other people wearing. And especially celebrities. But searching for something like the 'shoe that Paris Hilton wore at the London Fashion Week day 2' is impossible. Or well, it used to be. 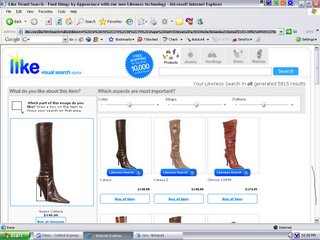 Like.com lets you do that - and more. You can actually zoom in on a particular feature of a shoe you like - such as the heel - and ask to find something similar. And boy, does it work. I tried a few searches and the results were amazing!

What's more, in some time Like.com will allow you to upload your own photos and search for similar stuff available.

Like.com is smartly focussing on jewellery, shoes , handbags and watches - stuff that does not require trial and which millions do buy online already.

Of course hum bechare Indians ka koi khaas fayda nahin hai. I mean Indian women, for all their love of fashion, are not yet into high end handbags or shows in large enough numbers. And definitely, not online.

But who knows, in the longer run? Or even, now for that matter.

If I were an Indian retailer like Globus or Shopper's Stop or even a smaller boutique on Hill Road it would make sense to digitise a large part of my
inventory. Even if I don't sell online I might attract buyers to my shop coz they know I have a style/ item they have found through photo search.

Stores like Roopam targetting the NRI wedding market will definitely benefit. Not only do they have a rather extensive catalogue
they sell online as well.

I am sure there would be tons of women searching for outfits similar to Aishwarya's in Umaro Jaan right now :). In fact the volume of search for a particular item would indicate how much consumer demand there is for it. And a smart retailer could stock up accordingly.

Lastly, like.com will make life more difficult for desi fashion designers. One click and we'll be able to see the source of 'inspiration' for their latest collection. Even if it's an obscure Moroccan designer they've copied stitch by stitch!

Bottomline is, I like Like.com, even though I can't really use it yet. It adds something unique to the internet user experience, and solves a real problem. One which I could not even articulate but which existed nevertheless!

And, it's what you can really call an advance in technology. Which is more than can be said of most web applications which are simply me-toos.

Besides, the possibilities of how the software can be used are endless. Because a picture speaks more than a thousand words. And across languages and cultures! I bet there's lots more in store.
Posted by Rashmi Bansal at 11:30:00 PM