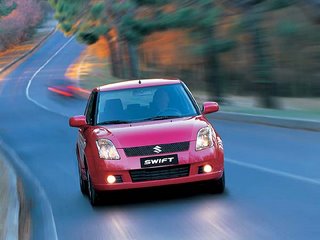 India's largest car manufacturer thinks that is a tremendous opportunity. Jagdish Khattar, MD of Maruti Udyog observed in an interview to DNA: "More than 25 million two wheelers have been sold in India in the last 5 years, and they can unleash a demand explosion once these customers upgrade to entry-level cars".

He cites a globally used thumb rule - a family becomes a potential car buyer the moment its annual income equals the price of a car. Khattar points out that according to NCAER, 28 million households in India will have an annual income between Rs 2 and 10 lakhs by 2010.

So far so good, but the interesting thing is it's not just money that holds people back from buying a car. As Maruti forayed into B and C class towns and semi urban areas its dealers discovered the following:

1) People could buy a car but worried that maintenance and spare parts would be expensive.

2) Many simply did not aspire to buy a car.

Fear no 1 is what the company can handle most easily. After all its cars may not be sex on toast but one thing a Maruti customer is really happy about is the easy and cheap availability of spares and repairs.

Problem no 2 is tackled by the 'tipping point' principle. Ten years ago a washing machine was seen as 'not necessary', five years ago mobile phones were a luxury. When enough people in the target buyer's peer group invest in a car, mindsets change. Maruti has systematically targetted such groups eg teachers, public sector and bank employees etc.

It's the third concern that Maruti - as well as other car manufacturers - would find most the hardest to tackle. Unlike America where you have 'Driver's Ed' as a high school subject, we don't consider learning to drive a must-have skill.

Of course we have a lot of driving schools which 'teach you' for a fee but it might be a good idea for Maruti to offer first time buyers free or discounted driving lessons. It just adds to the comfort level.

But the roads and traffic - that's something they can't do anything about. In fact the more cars on the road, the worse that's going to get! The last problem which Khattar does not mention but which is very real is 'parking'. That too is a deterrent.

The Future
I think Maruti is doing a number of interesting things - which shows it is very much in tune with the market. From a solid but stodgy company it's become far more 'with it' after launching Swift. Recent sales figures make that clear.

With rising oil prices and the demand for 'cheaper to run' cars Maruti is setting up a diesel engine plant. It also recently launched an LPG version of Wagon R and offers the Esteem with a factory fitted CNG kit for those who desire it.

The one area where Maruti is lacking however is its existing customers who wish to upgrade. Especially for those who own an Esteem. Yes, you could buy a Baleno but the car is so uninspiring that despite the huge discounts on offer, hardly anyone is
biting. But Khattar plans to launch 5 models in 5 years - so I guess they will eventually tackle that problem.

Things have certainly changed since the days when Maruti 'bookings' sold in black. Or from the days when you had to save up for years to buy a set of wheels. Today 80% of the cars sold in India are bought on EMI.

So looks and features become more and more important - you don't mind paying a thousand or two extra per month for something you really like. It also means people are buying cars at a much younger age.

The bottomline is there will be more and more cars on our already crowded roads. That may be great news for Maruti - and other car manufacturers but not much fun for rest of us. If Khattar's predictions come true and India goes the China way in car sales, the situation will truly grow crazier.

But hey - it's a democracy. The Ambani Maybach and the average man's Alto will be stuck in the same never ending traffic jam on the same potholed road!

P.S. My sudden flurry of posts on cars and driving are related to my own purchase of a car this month. I guess the excitement will die down soon and I'll get back to writing abt regular stuff :)

car pic from www.dancewithshadows.com
Posted by Rashmi Bansal at 12:01:00 AM