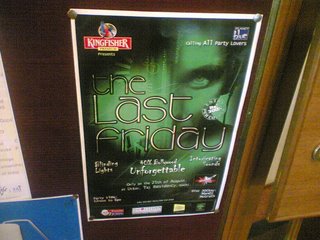 I'm standing in the lobby of the Taj Residency in Cochin when this poster catches my eye. The Last Friday promises 'blinding lights, intoxicating sounds' from 12 noon to 6 pm. As it's nearing 2.30 I head in the direction of the dull thumping sound where the young people of this fine city appear to have gathered to let their hair down.

Well, there were lights alright - excellent sound too. But a total of 8 people, two couples huddled on a sofa and a gang of boys staring at the empty dancefloor. In the adjoining bar, I finally spot a girl who looks like she's dressed up for the party. Slinky heels, danglers, orange halter top.

"No sweetie.. I'm a model from Bangalore," she drawls. Uh huh. A friend of the organiser - a dude looking young man who plays it cool when I ask him where the crowd is. "They're coming.. ," he says vaguely.

Simon's family is in the icecream business - they make the stuff that's sold under various local brand names like 'Lazza' and 'Uncle John'. The guy is obviously loaded and has taken upon himself the responsibility of making Cochin more 'happening'. "I plan to open up a cafe on Marine Drive where the youth can hang out... a really cool place."

'The Last Friday' has been advertised on billboards and in the local papers. Entry is just Rs 300 per couple. So why isn't anyone coming? Could it just be one of those freak flop events, or does it say something about the party culture of the city? Rather, the lack of it...

Of course, 'afternoon discos' are not peculiar to Cochin. Not at all. All over India, afternoon jam sessions are the answer to parental restriction on 'staying out late'. Especially for girls.

But Cochin - from the half a dozen young people I spoke with - seems to be a step ahead of most other cities in the restriction department. The girls hostel in a local college closes its gates at 6.30 pm. The swanky new mall on the one and only 'Marine Drive' is deserted on Friday night at 8 pm. And that's a week before Onam - when you would think it would be crowded with festival shoppers!

Where are the jobs?
With Bangalore and Mumbai also applying the brakes on nightlife (although partially lifted - the spirit remains crushed) I'd say parties - or the lack of them - does not define how happening a city is for its young people.

What worries me more is the lack of job opportunities.

Of course, Kerala is known to be a 'Gulf economy'. But the new generation hardly seems as keen to go that way. Devin is a twentysomething with an M A in History and a love of photography. He briefly worked in a call centre in Mumbai before dumping the job and heading back home.

"It was very hard," he says."No proper food, no friends... " But lady luck smiled on him. He's now got a job with Carnival cruiselines. How, I wonder, without a degree in hotel management? "A friend is working there already... so he gave my name," Devin grins.

The I-help-you, you-help-me culture seems particularly strong in Kerala. People really seem to go out of their way for their friends, relatives and neighbours.

But what will he do on the ship, I wonder. "I will be taking photos," says Devin. He demonstrates: "Hello madam! How are you today? You are looking very beautiful...Pose for photo, please?"

With his accent, smile and pleasing manner, Devin will easily pass off as Latin American.

Exporting vs outsourcing
While the rest of India - including Communist West Bengal - is trying to attract investment, the Kerala government is least concerned.

The only state in India that boasts 100% literacy must still export its human capital to the rest of India - and the world - because few want to take the risk of setting up shop here. The unions are just too much trouble.

But there's another problem when it comes to call centres: almost everyone has a thig agzent. It soundz very kwent but probbly nott to the years of ech aar maangers in BPO combanies.

Surely something training can and does tackle. But the point is you have to migrate to Bangalore, Chennai or Mumbai (Miami, in Devin's case) if you are serious about your career.

There is so much beauty in this state that rightly calls itself 'God's own country'. But sadness as well, for it could be so much... so much more.
Posted by Rashmi Bansal at 4:09:00 PM