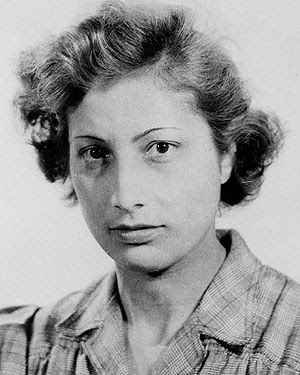 I love history and more so when it's brought alive by the likes of Nat Geo, History Channel & the BBC. Take World War II. What we studied in school was an itsy bitsy part of the story. 65 years after the war ended there is still so much to learn about those fateful six years.

And so it was that on Sunday I learnt the fascinating story of the 'Princess Spy'. Did you know that Noor Inayat Khan, a young woman of Indian origin who worked as a radio operator behind enemy lines? For her courage and her contribution towards the war effort, Noor was posthumously awarded the George Cross, Britain's highest award for gallantry not on the battle field.

It is a truly fascinating story!

Noor's father was the great grandson of Tipu Sultan, but he was a musician and Sufi scholar who lived in Europe. Unfortunately, he died when Noor was 13. Her mother fell apart and thr young Noor brought up her three younger siblings, even as she studied child psychology and music. At age 25, she brought out a book on the Jataka Tales and would probably have made some impact in the gentle world of the arts when World War II broke out.

Noor was brought up as a pacifist, but she wished to contribute to the war effort. So, she joined the WAAF (Women's Auxiliary Air Force) and trained to be a wireless operator.

She was later recruited to join a very dangerous 'special operation' where she would be dropped in Nazi occupied France and transmit vital information about the ground situation there, by wireless. Although her superiors had their doubts about her suitability for the job she scored on two counts: fluent French and proficiency as a radio operator.

Now the reason this job was so dangerous was that you would be operating in civilian clothes and hence classified a 'spy'. That meant, the Geneva convention did not apply. If caught, you would be executed.

'If' is actually a wrong choice of word - 'when' caught, more like it! The average stint of an undercover radio operator was 6 weeks. But somehow Noor managed to do her job undetected, for 4 months. The wireless was a bulky contraption of 16 odd kgs and she carried it around with her from place to place, evading the Nazis.

Sadly, the entire undercover network was compromised by a double agent called Henri Dericourt and she was eventually busted. The place she had been transmitting from was just a stone's throw from the Gestapo HQ in Paris!

After being captured, Noor showed exemplary courage by refusing to part with any information. She tried to escape more than once and was classified as a 'highly dangerous' prisoner.

On 13 October, 1944, Noor was beaten and then shot to death in the infamous Dachau concentration camp.

You can read her full story here but do try to catch the documentary (by the BBC) being telecast in India on the Fox History & Entertainment channel. Incidentally, the documentary has a personal touch as it features her sister's son visiting the places where she lived, operated from and finally breathed her last.

Two things that really struck me:
a) When the underground network collapsed, HQ offered her a safe passage home. She refused.

b) She was provided a pistol but left it behind in England as she did not believe in killing anyone, even in self defence.

Noor Inayat Khan's story deserves to be in our history books. I am sure one of these days a Bollywood film will be made on her life and although what we see on screen will be a masala version I think it's okay.

Her spirit is beautiful enough to shine through.
Posted by Rashmi Bansal at 2:22:00 PM