I saw a 'serious English film' in a theatre after a long time. The reviews of Chandni Chowk to China are just too abominable. Kind of confirms my suspicion that Kal ho na ho was ghost-directed by Karan Johar. There's no evidence to the contrary from Nikhil Advani since!

So, Changeling it was. And it is a pretty hard-hitting film. The story is simple: Christine Collins is a single mother who comes back from work one evening to find her son Walter missing. Five months later the LAPD finds a boy who matches Walter's description and claims to be Walter.

At the railway station where they are 'reunited' Christine exclaims,"That's not my son!" But she is manipulated into agreeing to take the child home because she is not 'thinking clearly'.

What follows is a very Indian-sounding tale. Corrupt police force, lone woman against system (ok, not totally, there is a crusading activist pastor on her side).

Christine is thrown into the psychopathic ward of LA General Hospital. The doctor says she can walk free if she admits that the boy returned to her is Walter. Thanks, but no thanks, says our heroine.

Now the shocking part in all this is it is a TRUE STORY. Not even "based on" a true story but an actual one. Of course it happened in 1928. . So guess what, Los Angeles - city of dreams - was once as lawless as good old UP or Bihar.

Although even back then the streets were cleaner.

What I liked about the film:
Using sets or digital photography, the film manages to convey a beautiful period feel. The trams on the road, the clothes worn by the boys to school in the era before jeans, and the Pacific telephone company where operators run manual switchboards and the supervisors swish by on roller skates. I just loved all of that.

There is very little hysteria or melodrama - it is all very sad but sombre and understated. Without revealing any more of the plot let me just say that there is no 'happy ending' although justice is eventually served - in more ways than one.

What I did not like:
The film was long - way too long. Aadha ghanta easily snip ho sakta tha.

Secondly at some point I felt it was trying too hard. It practically screams, "Nominate me for an Oscar!"

Lastly, I didn't care much for Angelina Jolie in this role. Director Clint Eastwood apparently chose her as soon as he discovered she was interested because her 'face fit the period setting'. Maybe she did fit the bill, and maybe she did put in a good performance. 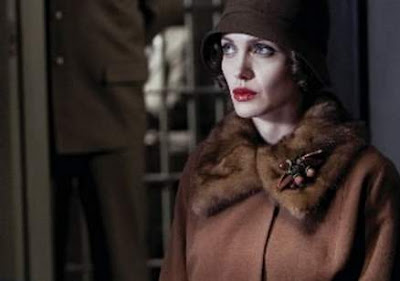 But I can't really say. In many scenes the only thing that held my attention were those huge pouty lips - smeared with a newlywed-in-Gurdaspur shade of bright red lipstick.

Overall I would give the film 3.5 stars but of course it is not something to watch for 'timepass'.
Posted by Rashmi Bansal at 4:08:00 PM