Could there be two movies more different in style, story, theme and presentation? And yet, there is a thought that is central to both films.

The coin has two sides.
The mirror has two faces.
Every human being has another aspect to his/ her personality, rarely seen. 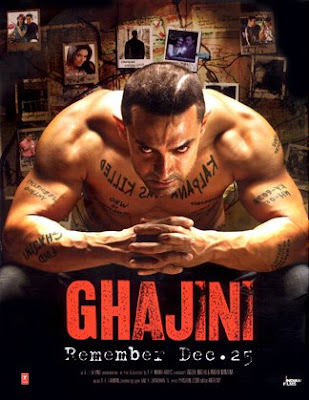 The Ghajini version is more plausible. The impact of witnessing a brutal murder coupled with a massive head injury literally brings out the animal in Sanjay Singhania.

I HATE violence on screen and even in Ghajini I covered my eyes every time the amnesiac-animal went on a rampage. But I must compliment Aamir Khan for the way in which he played the role.

When he bashes up (or actually just brushes aside) an army of goons in the climax scene, I did not feel this is the typical 'herogiri' of Hindi films. Sanjay Singhania was an ordinary guy with extraordinary power because he had a 'mission'.

The fact that he could not remember what that mission was made for the twist in a tale which would otherwise have been a 'kameene main tera khoon pi jaoonga' kind of revenge drama from the 1970s or 80s.

I was happy to see that Aamir's rippling muscles and even the Ghajini 'hair style' were not mere packaging but integral to the storyline of the film. That's what one expects from this very fine actor :) 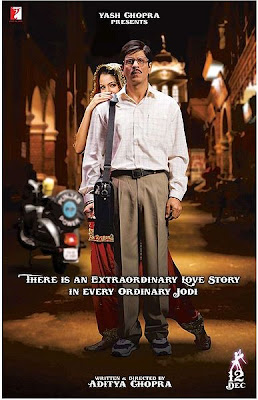 Coming to Rab ne Bana di jodi. Here too, we have a hero with 'two sides' although one really has to take a huge leap of faith to accept that a woman won't recognise her husband from two cm distance just because he does not wear his spectacles and moustache.

Apart from that of course, Aamir is a case of 'before' and 'after'. He was one person before the haadsa and a completely different one after it. Even after he completes his mission - and especially from the last scene - it appears that he will live in cuckooland, pretty much forever.

Surinder ji on the other hand is leading a 'boring is normal' kind of life. And yet, in a candy floss version of the old Dr Jekyll and Mr Hyde routine, he transforms into Raj while claiming to be in office working 'overtime'.

Now since this is a Yashraj production, he is actually trying to romance his own wife. The Anurag Basu (and closer to reality) version would have a Raj making out with some hot chick in the office!

The question that is never convincingly answered in RNBDJ is why Surinder could not be a little more expressive and get a better haircut without pretending to be Raj. But you see Rab ne banani thi teen ghante ki picture. So the Dr Yellow Tiffin Box and Mr Tight Yellow T shirt tale has to stretch on.

In real life, however, you find that even Raj eventually progresses to a Surinder-like state of stupor and the only thing that keeps the average Indian couple is the common ground they find in their children and social obligations.

Moral of the story:

From Ghajini: A haadsa can transform life as you know it. Yes, that is the case most recently with the survivors of the Mumbai terror attack. But is 'revenge' really the answer?

In the film we see Sanjay earn the satisfaction of killing Ghajini the very same way he bludgeoned Kalpana. But will the relatives of those killed in the terror attacks get a sense of 'relief' when Ajmal Kasab is sentenced to death some months, or even years from now?

Coming to term with senseless acts of violence and the evil side of human nature is one of life's biggest challenges. Ultimately revenge is an option but not the 'solution'.

From Rab ne bana di jodi: Men and women are both stuck playing 'roles' in their earthly lives. Okay, but they can either sleepwalk through it all or be fully alive and involved while performing their parts!

There is no perfect partner out there. Just different combinations of Surinder and Raj, Golgappa and Biryani - or whatever you choose to call the yin and the yang inside each of us.

So undertake the physical makeover, mental makeover, spiritual makeover - whatever it takes to 'light up your life, ji'. Rishta nibhana is the Indian solution to the oldest of all relationship problems in the world. And Rab ne almost convinces you that yes, it surely works!

But as I walked out of the hall I couldn't help thinking of the irony in reel life vs real life. Aditya Chopra, director of the film did not see rab in his jodi with Payal - he chose the route of the divorce court.
Posted by Rashmi Bansal at 8:48:00 PM