Did the media overdo it?

We, the undersigned, citizens of India, humbly pray for the following reliefs;

1. That this Hon'ble Court call for the complete and unedited footage from all TV News Channels broadcasting the attacks 'live', starting from 9:30pm on Wednesday 26th November 2008 and until the morning of Saturday the 29th November 2008 and examine the same by itself or through any appropriate agency as appointed by it, to investigate and determine the manner in which sensitive information pertaining to the movement of Counter-Insurgency Operations was broadcast 'live'.

That is a petition from 'Small Change' , started by singer-composer Vishal Dadlani.

And of course we had that outburst from Admiral Suresh Mehta, chief of naval staff. He was disturbed by the 'excessively heavy reporting' during the commando operations

As a member of the media I think:

* Yes, a code of conduct needs to be formulated and it will. In war zones the army can control what the media can see and report on. But we've never seen this kind of urban attack before!

* I thought close up shots of NSG commandos landing at Nariman House were avoidable. But so was the huge crowd gathered on the street outside the operation despite so called curfew!

* Apart from actual coverage during those 60 hours what sickens me is the constant replay of the visuals. Do we need to see the Taj burning for the nth time and have every report prefaced with some 'explanation' of what happened? As if Rumpelstiltskin just woke up and switched on the television??

I think apart from actual death and destruction the terrorists were completely successful in terrorising those of us who were miles away from the guns and grenades.

And THAT is why we must also have a post-event code of conduct. A self-imposed ban on 'oh! we had such great coverage', 'we were exclusive!'. Which gives another excuse to once again loop those disturbing visuals.

I mean all channels had reporters out there, all day, all night, doing the best they could. This is not the time for the 'mera reporter tumhare reporter se tez hai' brand of competition.

Lastly I would like to add that the media - and TV in particular - is the only source of up-to-date information the aam junta has. And it is generally a good thing.

Like last evening, returning from Gateway, I heard there was a 'bomb scare at CST station'. The first thing I did was call at home and ask,"Please switch on the TV and tell me if it's ok to take a train!"

Other options? Well, I did notice this poster in the train. Perhaps it's always been there but I just never paid attention to it before... 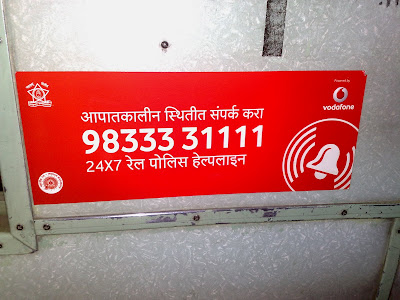 Please do note that number but oh, if it is engaged or unreachable I guess you may just have to call home and ask your mom to turn on the television!
Posted by Rashmi Bansal at 7:57:00 PM