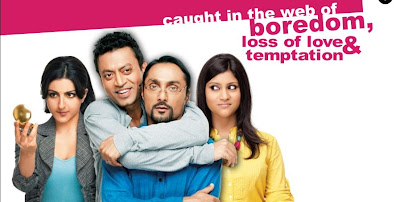 There is no such thing as a perfect relationship, or a perfect film. And this one in any case has apparently been ripped off from a Woody Allen classic.

Given the generally poor reviews it's getting I doubt it will get much of an audience. But I still think Dil Kabaddi is an interesting watch and brings up a lot of issues which hit any couple in a 'steady state' (a k a marriage).

The question is 'what went wrong'?

Mayank Shekhar observes: "It’s a little hard to believe that the two central characters here, possibly in their early 40’s (Bose, Irrfan), going through the usual mid-life crisis, would suffer excitement issues with women so young and intelligent (Konkana, Soha)"

The issue however is not how attractive these men or women may be to other people. The main problem seems to be constant criticism.

The very first scene opens with Meeta and Samit in a car, with Meeta rebuking him roundly for wearing dark glasses in the night. "Yeh style hai.." he replies lamely. "What style? Style for people with no style," is her verdict.

Meanwhile Simi says of her college professor husband not once but several times in the film,"You are too critical." Which is why she never shares her poems with him, but with Veer, the cute guy at her office.

We all like to be validated and appreciated. So why DO we become so critical with those who are closest to us and who want our emotional support the most? Well, partly I would say it is the negative side of our much vaunted "Indian culture".

Family hai na, we can take each other for granted. Few of us have seen our parents being affectionate and appreciative of each other. And we follow the same pattern.

And basically we create a cycle. Maybe Meeta is the critical type... but maybe it all gets worse because Samit does not show any respect for the things that are important to her. She feels neglected and unheard and so, a small thing like those dark glasses which she could have remarked about in a more light hearted manner ends up sounding very harsh and critical.

The second interesting thing which Meeta remarks at one point is really about the tipping point in a relationship. She muses,"After X incident I had decided in my heart that I am leaving this guy and so anything he said or did started irritating me."

Yes, the truth is that it is not irritations which lead to people breaking up but a small voice inside that has already spoken:"Pssst - he or she is not the right one for you."

And then EVERYTHING about that person starts bothering you.

Remember what they say about rose-tinted glasses? Well many of us exchange them for a pair like Irfan Khan was wearing and then suddenly everything goes dark.

So what is the 'escape route'? The film explores the most common one: hooking up with someone else.

In what must be every 40something guy's fantasy, Samit shacks up with an airheaded aerobic instructor who is happy to have sex and watch mindless films with him. Now this character called Kaya (played by Payal Rohatgi) is a complete caricature but the bottomline is there is NO such thing as a low-maintenance partner. Everyone has some quirk or some control drama which means you will have to 'compromise'.

Samit realises it's better to live with an uptight Meeta and watch art films than eat ghaas-phoos and suffer a socially embarassing Kaya.

Meanwhile Meeta too has 'found someone' but please note that despite the modern packaging she is a bhartiya naari. And so although she has not one, but two guys interested in her she never actually has sex with either of them.

How realistic is that? I guess the director thought the audience would not accept the couple getting back together again if she had her fair share of escapades as well. Remember 'Life in a Metro' (which was of course more sensitively handled)?

Even the men in the film are amazingly inhibited (there is a v funny scene where Irfan does sheershasana when he is first trying to have a fling and starts palpitating).

One of the most interesting characters in the film however is Raga (played extremely well by newcomer Saba Azad). She is a young student Rishi is attracted to. The monologue where she talks about how older men always get the hots for her is both sad and funny. You *know* there are girls like this out there. It's an ego trip as they flit from one such victory to another until one day they wake up feeling empty and confused.

The most complex character of all is Simi - the passive-aggressive type who 'knows how to get her way'. Without actually, directly, asking.

And it's instructive to note that Simi - the one who gets MOST upset about her friends breaking up - is the one who has been suppressing similar issues. Like the guys who shout the loudest against obscenity and Valentine's Day - I bet at some level they are struggling with those issues deep inside!

At the end of the film, there are no answers. On the one hand Meeta and Samit have patched up. They 'never fight' now. When Meeta gets angry she just goes and starts washing already washed clothes again in the machine.

"We have kept a black shirt there - kya pata kab zaroorat pad jaaye", says Samit. The shirt is almost white now, and we laugh, ha ha.

Simi leaves Rishi and marries Veer, whom she manipulates with a smile. Who knows where they will be four years from now? Maybe Veer will keep a black shirt next to their washing machine - to cope.

So although the film is a comedy (and yes there are laughs at several points) it is ultimately a depressing message. Maintaining a relationship on the basis of love and mutual respect is bloody difficult. Don't even try!

Of course, as Mayank noted in his review: Clearly the setting is copiously derived. Marriages in India are instantly a function of families, where parents are most involved. Divorces and experiments don’t come this easy.

Woh to hai. I mean half the couples in this country would probably have been playing dil kabaddi it weren't for the kids and log kya kahenge. And of course, many of them do, while pretending to live 'happily married lives'.

As for the film - for the great performances, some great moments and gags - I give it 3 stars. It's definitely the best of the 3 Bollywood releases on this weekend!
Posted by Rashmi Bansal at 6:32:00 PM