The 3 mistakes of my life: review 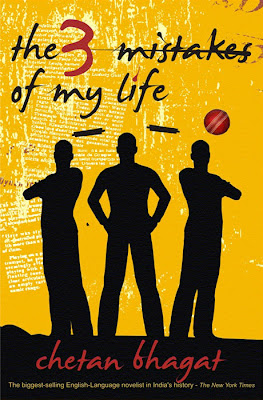 'The 3 Mistakes of My Life' is actually 'Five Point Someone' part deux. The only difference is, the three 'five pointers' are not in an IIT but strugglers in the real sense of the word - running a small business of their own in Ahmedabad.

The difference is that '3 mistakes' is better designed, better marketed and ready to be snapped up by the now numerous 'Chetan Bhagat' followers.

Fans will not be disappointed. This book has all the ingredients CB is loved and lapped up for. Characters and storyline one can relate to. The small joys and the big frustrations of growing up (which are pretty much common across India).

So I won't discuss the plot - read the book if you like CB style storytelling, keep away, if you don't. What I will discuss is the small stuff which I think Chetan always gets right...

- The ambience of Gujarat and Ahmedabad in particular.
Sample lines like: Gujarat is the only state in India where people tend to respect you more if you are in businesss than if you are in service (v true!) and 'Gujarat is a dry state.. people here get drunk on food'.

- The dynamics of running a business with your friends.
The fact that each individual has his own motivations for going into business.

* Govind is driven by the desire to prove something to himself and to others. He dreams of becoming a big businessman someday,

* Ishaan or 'Ish' is driven by passion. The shop is an excuse to stay close to the thing he loves most in the world: cricket.

* Omi is in it because of TINA (There Is No Alternative). But he gets his uncle to give them a shop on rent cheaply.

So in their own way all three contribute to the success of the business!

- The India style love story.
As with his other books, '3 Mistakes' captures a reality where young people are less likely to make out in bars and discos than on the building terrace. And more likely to enter 'true-close-friendship' while studying maths problems together than at a coffee shop - especially in small town India.

- The feisty small town girl.
Medical entrance exam is just an excuse to escape to an anonymous place. Where your brother won't be standing by to thrash every guy who gives you a second glance.

- The angle of religion which is handled well for the most part.
Govind's impression of the Hindu fundamentalist leader captures what many of us feel when listening to arguments about the need to rise up against thousands of years of injustice: "I was both attracted to him and repelled by him. He had charisma and lunacy at the same time".

- The author appearing into the book as himself.
This is a clever touch which Chetan used in One Night @ the Call Centre as well. Makes him all the more 'one of us'. Weaving in real events like the Gujarat earthquake is the new Big Idea.

What could have been better:
The climax. It felt contrived - as if the author were thinking, "Hey this would surely look good in a movie." Ditto feeling re: the chapter in Australia.

The entire plot around a boy called Ali. I know it was important but it became a little too predictable...

The '3 mistakes' were not really mistakes... After all life is not an exam with right and wrong answers! Some of it is choice and some of it destiny. Of course it is an attractive title...

A couple of other glitches:
If the story was set in 2001-2, surely cellphones were not so very common then? Vidya and Govind smsing incessantly would have been difficult!

And the Gujju term for Ahmedabad residents is not Ambavadis but Amdavadis.

But overall, the book packs enough punch and of course the price is just right (Rs 95). We have another winner. My rating is 3.5/5.

As always, there will be other opinions. More reviews here and here.

Email ThisBlogThis!Share to TwitterShare to FacebookShare to Pinterest
Labels: 3 mistakes of my life, Chetan Bhagat