"We all change for the one we love" 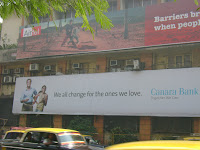 A wife is seen holding a pair of golf clubs...

And an elderly South Indian lady is learning Punjabi to welcome her daughter in law.

"We all change for the people we love" is quite an endearing campaign (esp the TV spot). "Wahi muskuraaate chehre aur kuch nayi technology" is the promise of Canara bank and I like both the message and the execution. Much more relevant than SBI.

Now let's just hope they deliver on the hi-tech bit. Wonder if every branch really looks as glitzy as the one they show in the advert!

Actually the ad set me thinking on the whole premise of 'changing for the people we love'. The key thing is it has to come from within. But even then...

The dad wants to get closer to his daughter, the wife wishes to share her husband's world. It's one thing to make a gesture to show hey, I care about what's going on with you. And another to change the core of your being.

Would the mom in law throw away her saris and wear only salwar kameez? Or the wife accompany the husband to every game of golf? Imagine the dad scrapping his daughter every day on orkut..

Ridiculous, extreme and unnecessary, isn't it?

Except that we end up doing this in real life, especially when the loved one is a romantic partner/ spouse.

I hang out with his friends.

We only cook what he likes.

I don't wear pink because he says it does not suit me.

We change little by little but it all adds up. You make a million small changes or 'adjustments' as they say and poof! Your own identity gets completely lost.

Now I am sure that men who also make a lot of changes but I still think women make more. In fact, many women believe that it is their primary role and responsibility to 'keep the peace' in the house. And if keeping that peace means I have to 'change myself' to theek hai na. Usme kaun si badi baat hai?

Take the case of Kristin Richard, Lance Armstrong's ex wife. She related a story on the Oprah Winfrey show that struck a chord with women all over the world.

You and Lance looked like you had it all," said Winfrey, noting that Richard was swept off her feet by the stellar athlete, married him, had three children quickly and moved to the French Riviera. Richard, however, said that her role was strictly to cheer on Armstrong, prompting Winfrey to advise women not to make the same mistake.

Of course Kristin chose to adopt this role...

"It wasn't Lance saying, 'You should be like this' or 'Do this.' It wasn't him making a mandate and me being a mouse. It was me trying to emulate whatever I thought would be the perfect wife or the perfect mother," said Richard, promoting an article she's written for the April Glamour magazine titled "What I Wish I Had Known About Marriage."

"We think we're trying to please somebody for the sake of our marriage, but then if you ask Lance today if he appreciated that, I think he would probably say, 'Well, that wasn't the woman that I fell in love with,'" added Richard.

Although what Kristin says is true, many of us expect do our partners to change and don't hesitate to say so. 'If you love me why can't you blah blah blah?' So it's not always heartfelt and voluntary...

Kristin adds that she surrendered her job, her dog, as well as her independence when she married Lance. She also admitted to being blinded by the huge diamond ring he gave her when they got engaged...

The moral of the story is if you are really turned on by golf, sure - take up those clubs. Otherwise just don't nag and spoil the pleasure he gets in playing the sport. Use that time to pursue something that you really like.

You gotta spend time together but also give each other some space! And this applies to all you boyfriend-girlfriend types as well.