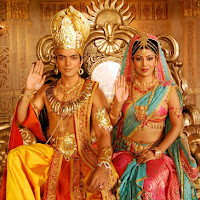 A remake of Ramayan is a better flagship show to have than yet another K soap. (Although the actors playing Ram and Sita look like they escaped from one of those sets...)

But the big question is: who is going to call their cable operator - or Tata Sky - and beg for this new channel?

And that goes for all other channels which are asking us to pay extra. NDTV Good Times, for example. It was ok to watch when free to air. But certainly not compelling enough to get me to pick up the phone and command Tata Sky: "I want this!"

And it's not the money - we spend 40 bucks for a coffee at CCD - but inertia. A book I'd reviewed for Businessworld a couple of months ago clearly demonstrated the power of the 'default' option.

The US has a perennial shortage of organ donors while the French have no such problem. Are the French more generous, or more moral? No, the simple explanation is that in France, Austria and Hungary everyone is a potential donor unless they opt out. In the US you have to opt to be a donor.

Similarly to expect us to opt in to watch your channel is not going to work... Unless it's for cricket!

Imagine what will happen when the TRPs come in...
Posted by Rashmi Bansal at 11:38:00 AM