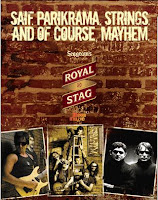 What happens when a Bollywood star picks up a guitar? He becomes a 'rock star'.

Saif Ali Khan plays with Parikrama and Strings tonight in Mumbai. This is part of a series of concerts sponsored by Seagram's Royal Stag (a brand which Saif endorses).

Now Saif claims the guitar has always been his passion - with some practice I am sure he can pull off a few numbers on stage. Whatever he lacks in guitar technique he'll make up in histrionics and stage presence. Aur poora band bhi to hai back up ke liye.

But undoubtedly there will be a bigger crowd than what you generally see at rock shows. For two reasons:

a) Far greater PR & publicity. The 'Saif is a rockstar' story is splashed across every Sunday paper.

b) Aam junta which has no interest in rock music will land up to see a Bollywood star in action. Of course how much of loud English music, drums and bass guitar they can actually take is a big question mark.

'Rock' has had a pretty rocky existence in India. It's perceived to be a cool thing to do in college - form a band with a few friends. Buy expensive equipment (if your folks can afford it), else spend time moaning about your lack of it. Spend your evenings disturbing numbers ofIron Maiden/ Sepultura/ 'Whatever Metal Band Is In Fashion'.

The more ambitious ones play at a few college festivals. The most ambitious continue to play even as they move out of college. But it's tough. Band members come and go. Rock may be a 'passion' but it's not a livelihood. There just aren't enough folks who will pay to come and listen to you.

The college festival circuit is your only steady source of income. But 80% of the junta sits at fests these days is comfortably numb to rock. They're present because hamare college mein koi show ho raha hai. The question on their minds half an hour into the concert: "Yaar koi film song bajega ya nahin?"

Rock music and musicians still stand for something cool. It's just their noisy and unmelodious music we can't stand.

Most of the talented bands realised they were fighting a losing battle and simply switched - to Bollywood. But in doing so they brought fresh life and energy into the medium. Shankar-Ehsaan-Loy and Vishal-Shekhar are two examples of rock-bred musicians impacting Bollywood with their unique style and sound.

Parikrama remained the Last Man Standing. Of all the bands born in the early to mid 90s they are the only ones who resisted and persisted with 'pure rock'. Forget ollywood, unlike Euphoria they refused to sing even in Hindi. And not for lack of offers. It was just against their principles.

Ironically, the same band is now elevating its crowd pulling capacity with the help of a Bollywood star...

The fact is Bollywood sells but 'rock' is cool. Marrying the two is a master stunt and good for all concerned: bands, star, sponsor. But will it leave any long-term effect on the popularity of rock as a genre? I doubt it.

The future lies elsewhere. I attended a Sonu Nigam concert last week and was surprised at his energy and stage presence. Maine socha tha aath dus aache gaane gayega, what we experienced however was an electrifying concert.

Sonu belted out most of his popular songs, but each zara hat ke from the recorded version. He jumped up and down the stage, charging up the audience to sing, scream, clap along (had it been an open air ground there would have been dancing as well!)

Along with Sonu, eight very talented musicians played live on stage. There was also a bunch of back up dancers. But the overall effect was not 'Bollywood nite'.

If rock is about energy, about passion and complete audience involvement - this was it!

Of course Sonu has tried - and failed - at becoming a star (independent of playback singing) in the past. His non film albums just did not click, the videos in particular were laughable. He came across as a wannabe in a leather jacket. But he has got his act together (in more ways than one) and I think guys like him are going to be the real 'rock stars' of India.

However it will be a long time before they are larger-than-life enough to have roadside taporis wearing their t shirts!
Posted by Rashmi Bansal at 11:05:00 AM