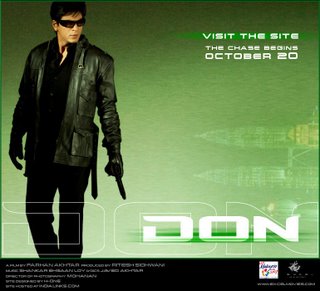 My affair with mobile gaming ended when I broke up with 'Snake' while shifting handsets. Truth be told, Snake broke up with me coz it wasn't preloaded on my Nokia 6670.

But after receiving N number of 'service messages' from Hutch exhorting me to download this that or the other wallpaper, ringtone or game, I finally succumbed.

I downloaded the 'Don' game, as per instructions. And guess what? Two files did appear on my phone. Don.jar and Don.jad. But the game refused to install.

So I asked the tech savvy dude and dudette in my office to try and make it happen. After all 20 bucks had been added to my bill... And we were to review the game before the film released, for JAM magazine. No luck.

I don't know if my experience was a common one. Or not. Certainly I have no energy to chase up the 20 lost rupees. For a game I suspect may not be all that hot anyways...

"See, this is an Indian game" and she turned up her nose. " Really sad..." The game was "Rei's love adventure" by Mauj. Here's how the intro of the game goes : (reproduced exactly)

"Rei the lovely flower girl want this year Valentine Days to be special. She want to give something special as Valentine gift to her boyfriend. She heard there are a lot of special item hidden in the maze garden but people said you cannot stay too long in the garden or you will get lost foreverin there. Please help Rei find all the items in the maze garden so her Valentine's Day will be the most special day she ever had."

As if that were not lame enough the game itself is a snake adaptation where a Hello-Kitty kind of girl-character goes around collecting hearts. And there is no challenge in terms of higher levels, speed, or difficulty either.

I can see even my 7 year old daughter getting bored of this in a jiffy.

"Now here are the really cool games..." and on screen appeared 'Da Vinci Code'. This game follows the plot and characters of the movie - you have to unlock the secrets hidden in the game. But there are some which are not in the book/ film so there is an element of surprise.

The game is mainly strategy/ role play but in level 2 there is a chase so that's where the action part is also brought in. Graphics are decent - in fact the game feels closer to a PC game. At least the kind of PC games you had not too long ago!

Other games recommended to me:

Pirates of the Carribean (it's not based on the movie plot though). And of course the PC classics adapted for the mobile such as Need for Speed, Carmageddon ( it has a multiplayer option via bluetooth), Doom, and Prince of Persia.

And oh, an additional tip. Playing games on phones with joystick controls is hard unless you have long nails. "In the N series, the power button is very close to the joustick. If you press it accidentally, power gaya, game gaya... You have start all over again."

So where do you get these games? You have to know the right people and join a closed user group or 'forum' dedicated to swapping and sharing. I'm sure there are sites on the net from where you can download them as well.

The 'potential'
All I know is, mobile gaming may be 'set to explode' in India according to industry analysts. I've written about the figures being thrown about in a previous post.

Given the number of mobile handsets and demand for entertainment/ timepass, there is a lot of potential. But I don't see the potential being achieved unless Indian companies:

a) Produce compelling international quality content. With the Bollywood footprint spreading across the world, I see no reason why a game based on a desi movie should not rival Da Vinci code in terms of graphics and challenge.

Quick and dirty won't work as more and more people upgrade to better quality phones in the next 2-3 years. Pirated versions of foreign games will trickle down from the cool and the 'know where to get it' types, to almost everyone.

b) The other model could be to sell basic, but very cheap and disposable content (games for 2 bucks each - you can play them just a couple of times and feel paisa vasool ho gaya).

Even here it's not just price but the fact that downloading, installing and playing consumes time and energy. I don't want 'faltu' stuff. Right now most developers are talking about the number of games they have made...Not that they actually sell any one in large quantities!

Most games get a mere 7-10,000 downloads in India. I know they also earn small amounts by licensing in to a large number of non-Indian operators and thus it works as a business.

The single largest selling title that I am aware of (excluding free R world downloads) is Sholay. It had 150,000 downloads by March 2006, according to a report published by the Internet and Mobile Association of India (IAMAI).

To my mind, it would be wiser to have fewer game titles but better quality. Perhaps I am mistaken and 'quality' does exist - but frankly, I as the end user simply do not have the information about it.

The gaming companies can themselves identify and promote select titles which have wide appeal. Additionally, they should send out mobile games to be previewed and/ or reviewed by the media - the way audio companies send CDs or movie companies invite journalists to press shows. Given that youth is the target audience, even bloggers could be enlisted.

The point being if the game is good, the ensuing positive recommendations will drive downloads. And if it's bad, well, those are the games which could be sold cheaply. And feedback would be valuable when developing games in the future.

And now, over to their websites...
Certainly, both developers and operators could provide a lot more on their websites. If you don't showcase your wares attractively how do you expect people to buy them?

The Hutch site is really bland - no indication of what the graphics might look like. Just a single screenshot and text description.

The Mauj site is a little better, but not enough. Take this game I randomly picked, based on KANK . There is no mention of how much it might cost me - Rs 20, 50, or 99? And would it really hurt if you let me see a simulation of the gameplay online, so I can decide if I like it enough to pay??

As for this site - it has not been updated in a while. Main hoon na wallpapers are a little out of demand right now. Also, you can't download anything ... Or did I miss something ?

Similarly, Mobile2win showcases
250 + games but it's not clear how I can download them. As the R world logo is prominently displayed, perhaps they supply content in India exclusively to Reliance and use the site to display their wares to operators abroad who may wish to license it for other countries. 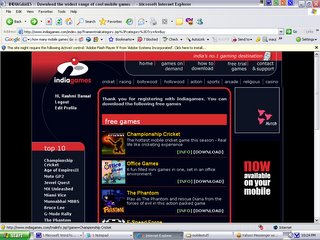 But all is not lost. Indiagames is a site with a difference. It's well designed, with prices clearly listed. Some attempt is made to showcase gameplay - check the Krrish game under 'Bollywood'. Not sure if people would pay 99 bucks if jumping up and down is all there is to it.. but letting us see what the action looks like is a huge step forward!

Another great feature with Indiagames is that when you register, you are eligible to download 5 free games. And no, they don't appear to be duds.There's Championship Cricket, F Speed Forge (a racing game) and character based games like Buffy the Vampire Slayer and Phantom.

What's more, instead of me having to send an sms to a short code number, the moment I click on download, Indiagames sends me an sms with a link to download the free game of my choice vis gprs.

I think Indiagames approach is the right one - this will help develop the market and build a longer term relationship with the consumer. This is how you reach out to more people, give them a taste of a new kind of thumb candy. When enough people like what they've tasted, they'll pay for more and there you have a 'gaming culture'.

One additional feature Indiagames should add is forums or allow Amazon-style user comments. I think that would add a lot of value. Ideally, we should have an independent and dedicated mobile gaming website like this one.

As I write this, I haven't actually been able to download my free Indiagames game because the 'web server is busy'. But hey, I shall keep trying :)

As for Don... if any one of you has managed to download that one, let me know if I missed anything! And yeah, anyone who'd like to review mobile games for JAM on a regular basis - do get in touch.
Posted by Rashmi Bansal at 11:06:00 PM