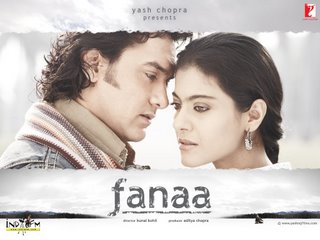 Fanaa is Kajol's film. Without her, it would be just another "oops, I fell in love with a terrorist" script shot in exotic foreign locales which pass off as Kashmir. But from the moment she comes on screen - in the first 5 minutes of the film - there's the old magic.

Yes, there are many flaws in the film - starting from the Baig family living in an amazing Alpine cottage in the middle of nowhere to the unlikely idea that a terrorist who masterminds elaborate operations is actually a tourist guide in saddi Dilli. That's how Zooni - who's on a trip to the capital to perform at Rashtrapati Bhavan meets and falls in love with Rehaan (Aamir Khan).

The first hour of the film, full of sher-o-shayari and Aamir doing another 'I'm a good for nothing tapori' act is really fun. The chemistry between Aamir and Kajol is incredible. You have to wonder what kind of chaperone would let a blind girl romp around Delhi with Romeo Rehaan. But this is Bollywood, so we’ll let it pass.

All’s well with the world, Zooni has found her shehzada, and even regains her eyesight (I know, sounds cheesy but somehow is not). Then Rehaan 'dies' in a terrrorist attack. You see, he is actually a key operative for the IKF which is fighting for the liberation of Kashmir from both India and Pakistan.

Seven years pass. Now the story shifts into James Bond country for a while, with RAW, Indian Army, anti terrorist squads, bombs which can kill 50 lakh people and so on and so forth. Rehaan, in Indian army uniform, is on the run with a ‘nuclear trigger’. Bleeding and blinded by a snowstorm, he lands on Zooni’s doorstep.

Of course, the love story continues. And ends. In between there’s a very cute kid and some singing in the rain and snow. You know a terrorist must die, so there is no suspense. Still, the story of Zooni, Rehaan and Rehaan jr tugs at your heart.

Genuine emotion and effortless acting are rare in Bollywood – and that’s why this film gets 4 stars from me.

All the actors are superb. Kajol I have oohed and aahed about already. Aamir is also amazing, although he looks old as a young man and young as an older man. The child star is endearing. So are Kirron Kher and Rishi Kapoor (yes, even him!) as Zooni’s parents.

I liked some of the small touches. Zooni and her friends could have been from anywhere in India – they’re shown as modern Kashmiri girls who wear fashionable clothes, make up and even discuss boys. I don’t know whether this is the reality – if not, I bet it reflects latent aspirations.

What’s more both Zooni and her family are shown to be pretty open minded. Her parents are actually thrilled to hear she has found her ‘shehzada’. Of course they might not have been as thrilled had they known Zooni had spent the night with him. Even though he was pretty clear that he could not give her a commitment.

This represents a shift in thinking. A heroine who is willing to give into her passions because there is a man who makes her feel fully alive. Even though she knows it may be just for a day, and not a lifetime. In fact, when Rehaan disappears on the day she is leaving Delhi it is Zooni who seeks him out and baat aagey wahi badaati hai.

Another nice touch was Tabu as Mrs Tyagi - a RAW officer. There is a small conversation she has on the phone with her daughter about eating custard and kheer which is so typical of a working mother’s life. Her male colleagues make snide remarks about it – which is pretty typical as well.

A special mention must be made of the child artist (dunno his name). Looks like Yash Chopra has picked a leaf out of Karan Johar’s book and decided to balance the more grim second half with a cute kid and his cuter dialogues.

Update: Ah, so the general view among bloggers on Fanaa is "ugh". Well we are talking 'brand Yashraj' here. This is a brand which believes in the formula - you have to live with that. What they do try is to tweak the formula a bit - sometimes it works, sometimes it does not.

Veer Zaara did not work for me, because I could not accept the basic premise. That a guy will spend 2 decades in prison for the sake of a girl he's spent just 24 hours with.

Frankly, I was not expecting that much from Fanaa because I didn't think a director like Kunal Kohli (who has to his credit flaky stuff like Hum Tum) could pull it off. But surprisingly, he did a good job.

And I do think some thinking went into Fanaa. There has been a shift in public mood, we're over the post-Kargil phase when there was a slew of films depicting Pakistan as enemy # 1. In Fanaa, the IKF is shown to be an independent group, waging a war against both India and Pakistan to liberate Kashmir. There is no mention of the word 'jihad' either.

Now all this may be wishful thinking, perhaps, because Pakistan is still funding insurgency in Jammu and Kashmir. A more cynical view, of course, is that the strategy makes sense when you know Pakistan and the Middle East avidly follow Bollywood films.

But then this is a love story where terrorism is just a reason to separate two people in love. Not a film on terrorism where a love story is weaved in to add an emotional dimension to the characters. The way soldiers in war films are shown to have girlfriends and wives, so you feel bad when they die.

For decades, parents were the villains in the boy-meets-girl tale. Now, we need new villains. It's about the guy who can't make a commitment (Hum Tum, Salaam Namaste etc). Or the girl/ guy being married and therefore love being the forbidden fruit (Murder). Or then the guy being involved in some nasty business - either underworld or terrorism (Gangster etc)

So these are themes which will be repeated over and over again. There may not even be new wine in an old bottle but just good, old wine. That's how I would describe Fanaa.
Posted by Rashmi Bansal at 8:17:00 PM