Ad Agencies: Where are the women?! 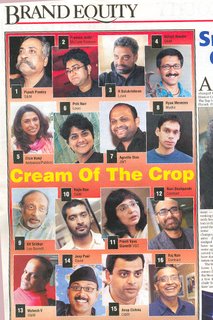 I take a break from the reservation issue to write on another issue which is related to the under representation of a particular group of people in society - women.

No, I am not advocating quotas for women either. But today's Brand Equity Ad Agency Reckoner 2006 begs asking the old question: Where are the women in advertising? Certainly not in senior or influential positions. And this is despite their very visible and large presence at junior and middle levels.

Among the top 20 Creative Directors in the Brand Equity list there are just 3 women. Two of them happen to be owners in their agencies: No 5 Elsie Nanji (Ambience Publicis) and No 11 Preeti Vyas Gianetti (Vyas Giannetti Creative).

The sole standard bearer for the work-your-way-up-as-an-employee route is Preeti Nair of Lowe Lintas. She is the biggest gainer this year and is described as someone who 'came from nowhetre on the strength of a few big campaigns like Surf Excel 'Daag Acche Hain' and Greenply's 'Savitri'.

Meanwhile, the Most Influential People in Advertising List is even more startling. 19 of the 20 people featured are men. Elsie Nanji is the only woman - at no 11.

Come to think of it, since the demise of Tara Sinha Associates, there is no woman professional at the head of an advertising agency in India. I mean a top 20 player (Vyas Giannetti is a creative hotshop).

Ah, so we get back to the same old explanations - women leave after marriage, women slow down after they have babies, women don't want the top job all that badly.

Sure - some truth in all those things. But we've seen, with the finance and banking industry, that women can and have reached extremely senior positions. Why not in advertising and I dare say, even marketing?

The funny part is it has always been believed women don't have a head for numbers and that is the area where they've actually made an impact.

Even in advertising, the one silver lining is that when it comes to Media Buying/ Planning - women are prominently represented.

Is there something I'm missing here? Women make it in media buying which requires number crunching and deal-making but not in creative and client servicing which require far softer skillsets. The stuff we're supposed to be good at.

Or is it that the 'numbers' speak for themselves and power the careers of the women who know how to make them sing?

Neil French resigned from WPP last year after his sexist remarks at a dinner in Toronto kicked up a storm. He reportedly said that there weren't more female creative directors "because they're crap" and that motherhood made them "wimp out" and "go suckle something."

In an interview French later clarified that he did use the word "crap" in reference to women but..

Fair enough. But are we saying there are no deserving and committed women in creative but lots of them in media buying? Sounds illogical to me.

There has to be some structural or cultural issue at work here...

Bottomline
Has the French episode had any impact on agencies? I doubt the men reading the Brand Equity Reckoner even wondered why there were so few women. That's just the way it is.

But is it the way it should be?

The 'most influential people' on that list - those 19 men - need to think about this carefully. And then, perhaps, use their influence.

Because advertising, of all industries, should reflect changing social norms. There are more women clad in power suits - in the ads you create. But what about more power for the women creating advertising?
Posted by Rashmi Bansal at 6:08:00 PM