Mobile Gaming: Too many 'wrong numbers' 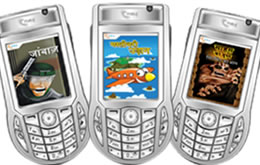 It's being touted as the Next Big Thing. But how big depends on which numbers you believe. And there are a LOT of different figures floating around right now.

Yesterday ET declared: "Paid download figures for mobile games are around 600,000 a month but it could be anything between 50-60% more".

Huh? Why can't ET arrive at a fixed figure for number of paid downloads after speaking to all mobile operators? I can understand operators overstating downloads - why would they understate them by 50% ??

Perspective, please
Hutch says that it has had a 50 fold rise on downloads (from 2200 per month in Feb 2005 to 120,000 per month currently). But while growth is heady the numbers are chickenfeed compared to ringtone downloads - 300,000 a DAY.

That's about 9 million downloads a month.

Of course the average ringtone costs Rs 10-15 while the average game costs Rs 50. Still 80% of Value Added Services revenue come from ringtone and caller tunes as of now; games accounts for 2-8%.

In light of that statistic this statement by Business Standard does not make sense: "Within a year, the market (for mobile games in India) has expanded from a mere Rs 25 crore to at least Rs 80 crore in 2005".

3rd standard mathematics problem: The ringtone market in 2005 was estimated at Rs 150 crores (a figure that appears correct given the no of downloads X Rs 10-15 per download formula).

CIOL on the other hand estimates (correctly, I think) that the market size of wireless/mobile games in India was US $3 million (Rs 13.5 crores) in 2004. They explain how the figure was arrived at:

It is estimated that, on average, there are 200,000 downloads of games via GPRS network of the cellular mobile players - Orange, Airtel, Idea, and BPL. The market size estimation assumes an average charge of Rs 50 per download.

Elementary, my dear Watson. Maybe all journalists should be put through a compulsory course in addition and multiplication!

And oh, somewhere in the equation lie another 15 million free game downloads in the CDMA space.

More maths lessons
Sorry for throwing all these figures at you - honestly I am the last person to show off when it comes to mathematics (my worst subject at school). But bear with me, there is a point in all this somewhere.

The question is - how many have GPRS/ java/ colour screen handsets? Pyramid Research, an Economist Group company estimates that "almost a third of Indian mobile users are restricted from gaming due to a lack of sophisticated handset availability".

The Pyramid survey shows that around 32% of cellphone users in India play games on their mobiles - double the UK figure. Obviously these are pre-loaded games like Snake, given that we don't see corresponding figures of downloads.

Fair enough - sounds entirely plausible. But according to a research by In-Stat/MDR , the Indian mobile gaming market is projected to grow to $336 million by 2009.

From $3 million in 2004 to $ 336 million is um... just not going to happen. The analysts are in the business of making dizzying projections - the figures get printed - everyone feels good.

It's like the astrologer who makes yearly predictions. No one checks back on the 99 things he predicted which did NOT come true (I distinctly remember one gent who predicted on Jan 1 2005 that Salman and Aishwarya would get back together..)

Who's playing
Back to the gaming conundrum. You and me know ringtones are huge - everyone has them. But games? Ask 10 people around you and it's unlikely that any has downloaded a mobile game.

Survey after survey by JAM magazine confirms that the 15-22 year old India metro-based youth is not an avid mobile gamer - at least not of the download variety.

Why? For one, they aren't impressed with the quality of games on offer. Most Indian developers are churning out a large quantity of games but there's no one game that's proved addictive enough to spread by word-of-mouth and become a must-have.

Secondly, Rs 50 (going upto Rs 150) is not a sum you want to throw away on a dud game download. Earlier operators did allow you to download a trial version of a game for Rs 20 but that seems to have been scrapped.

So neither do we have a killer app in mobile gaming, nor a price so low that the average Anand doesn't think twice before making an impulse download.

Games at throwaway prices (I'm thinking Rs 10) could expand downloads significantly. Mobile operators know better than anyone else that once they've hooked you, they've cooked you. That, and they would need to identify a few 'killer games' which junta would want to own.

The combination of affordability + desirability is crucial.

The Action shifts
The interesting thing is, currently B and C towns are driving a large portion of the growth in value-added services for the mobile industry. Techtree reports:

In such towns, mobile entertainment cost is almost considered as mainstream entertainment, because of the lack of an alternative."

Which is why Mauj has just launched mobile games in Hindi and 7 regional languages including Marathi, Gujarati, Bengali, Tamil, Malayalam, Telugu and Urdu. The move is targeted at regional audiences, as only 3 to 5 percent of the populace is familiar with English.

This is also why Bollywood based games are finding favour with developers. According to Mid-day: On average, a movie sells 7,000 to 10,000 copies with more popular movies like Hum Aapke Hain Kaun even going up to 25,000 downloads. The Sholay game, which kicked off the Bollywood-mobile gaming frenzy has over 50,000 downloads so far.

Again, you and me would probably not download these games - but their appeal to the large mass of users is high. So they do make good business sense.

Among the SEC A and B metro crowd Nokia's Ngage was high on the most-wanted list last year. But now, the lack of camera and FM have reduced its appeal.

Bottomline: Mobile gaming will grow in popularity - since the base is small to begin with the growth will appear spectacular. But better - and more affordable - games are the need of the hour.

And honest statistics derived from common sense calculations need to be used by the breathless reporters helping to hype up the phenomenon. Wrong numbers are inevitable in telecom. They should not be, in journalism!

Although, as I type those words, I worry... Kya mere saare calculations correct hain?