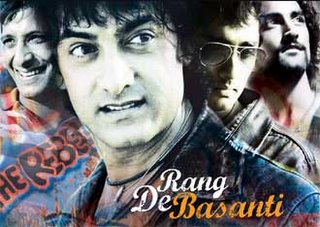 Everyone is dying to see this film, thanks to the fresh n funky look in the promos and posters; the amazing music and of course Aamir Khan. Add to that the curiosity factor of controversy.

And that is exactly why I was a bit worried as I walked into the press preview for the film. Would Rang De Basanti really live up to expectations?

The answer is yes!!! This film not only lives up - it far EXCEEDS your imagination. A good film entertains you while you're in the theatre. A great film stays with you long after you've left it.

Rang de Basanti, in my opinion, is one of those greats. If Dil Chahta Hai redefined 'youth' films, Rang de Basanti takes the theme to the next level.

I will explain why, but first, a quick plot summary :

Inspired by a diary written by her grandfather, foreign kudi comes to India to make a documentary on India’s revolutionary freedom fighters – Bhagat Singh, Chandrashekhar Azad and others who laid down their life for the country. She casts five young men for these roles – none of whom can identify with the idea of making any such sacrifices.

But, somewhere along the way the reluctant actors find themselves moved by the passion of the long-dead revolutionaries. And inspired to actually stand up and take on the System.

And from the official synopsis:
In the film both the 1930s British India and the India today run parallel and intersect with each other at crucial points. As the film reaches its resolution the line between past and present blurs, as they become one in spirit..

That makes no sense now but when you see the film it will! There. I’m not going to spoil it for you by giving the actual details.

Why Rang de rocks
Rang de Basanti’s greatness lies in the fact that achieves a fine balance. Dil Chahta Hai was a light film, this one has a message. Yet it manages to be as entertaining – perhaps even more than DCH.

The easy camaraderie and bonding between the friends lights up the screen. The language is Phinglish (Punjubbi and Hindi vich occasional English) – just the kind Dilli ke bande actually use (correct me if I’m wrong here!).

The film has all the usual youth ‘types’ – bade baap ka beta. good-for-nothing with heart-of-gold, nationally integrated cast of Hindu-Muslim-Sikh-and-isaai. And yet there are no stereotypes.

In fact, the film creates new definitions of old ideas. What does it mean to be ‘patriotic’? Rang de attempts to answer the old question in a new way. It’s not about Sunny paaji single handedly immobilising the Pakistani army and half its airforce by breaking the sound barrier as he booms “JAI HIND”.

Rang de Basanti says patriotism is about standing up and doing something. Not just complaining that everything in this country is useless but to see that each one of us is responsible for the current state of affairs. And has the power to start effecting a change.

Ah, but here is where the really controversial bit comes in. Is the path chosen by these young men the right path? Yeh kai dinon tak charcha ka vishay rehne waala hai. Coz these aren't the do-gooder variety of changemakers a la Mohan Bhargava in Swades.

Again I would say the film maker has managed to achieve a balance – while the characters do embrace questionable actions and ideas, the viewer is left with some alternatives which are more acceptable: like joining the police, IAS or politics.

This is how Rakesh Mehra put it to rediff.com: There is a matter of making a choice and accepting the responsibility of making it - that is the turning point in the film. The big moment is the decision for them to accept that choice, and take on the consequences of their actions, not to be escapists.

The ‘taking consequences for you actions’ bit is the crucial one. That’s what takes the film beyond the vigilante justice formula we’ve seen a million times before!

The Second Coming
Director Rakesh Mehra’s first film ‘Aks’ was described as “a superior product, technically speaking, but falters in that one vital department -- story-telling”.

Well, Mehra seems to have taken the feedback very seriously because this time the story and screenplay is numero uno, and on that strong foundation rest the other stuff: stunning visuals, music, technical wizardry.

The important thing about the story is that revolves around a basic clash in values –at many different levels. Youth of 1930s vs Youth of Today is the dominant theme. But there are many other sub-conflicts touched upon.

For example, the pressure from Aslam’s family to have friends from his ‘own community’ – the first time I think the ‘ghetto’ issue has been brought up on the Bollywood screen. Then there’s Laxman Pandey, a saffron party worker who’s anti-all-things-Western-and-Muslims. His attitude changes – in more ways than one – over the course of the film.

The casting – what can I say? All the characters – major and minor - don’t just play their parts. They live them. I particularly liked Soha Ali Khan, Kunal Kapoor, Atul Kulkarni, Alice Patten and Kiron Kher.

Aamir is great as usual. He looks a little old in some scenes but then he is supposed to be one of those dadas who’s still in college although he ‘passed out’ 5 years ago. And the film just would not have worked its magic on us without him.

Chhoti Baatein
I also liked the small touches. For example, the scene where Sue first steps out of Delhi airport is so true to life!

Thankfully the scriptwriters decided to give the foreign kudi Hindi speaking classes before coming to India - so we don’t have to suffer sub-titles or awkward English dialogue . And it makes for some good laughs as well.

All the threads of the story tie in together – which is rare in Bollywood. Like the RJ who makes a fleeting appearance in the first 20 minutes. Since it’s a known face (veejay Cyrus Sahukar) you wonder usne do line ka part kyun accept kiya. Well, he suddenly pops up as a ‘crucial’ part in the climax.

It’s also nice to see an ad filmmaker-turned-director NOT accepting ads in the film itself. So while there is a marketing tie up with Coke, there are no Coke bottles at all in the film. NDTV gets mega-mileage throughout – but it's not a plug. In fact, it adds authenticity to parts of the story.

It’s also nice to see the Gang hanging out at places other than standard issue coffee shops, malls and multiplexes.

They prefer omlets and chai in a sardarji da dhaba or a purana qila next to an airfield. Of course, there is one important scene in a trendy lounge bar too. This reflects more accurately the mix n match hangout culture (street food bhi khayenge, 5 star mein bhi) of actual youth – again, rarely seen on screen!

The sepia-toned depiction of the revolutionaries was also extremely well done. And illuminating. I never knew, for example, that Bhagat Singh and his comrades went on a hunger strike for 114 days because they demanded to be treated not as common criminals but ‘political prisoners’ entitled to paper, pen and a daily newspaper.

And the way Rang De manages to cut back and forth between past and present –not just as long flashbacks but from moment to moment without trivializing either era is amazing. I’m sure it’s very hard to pull off - in the movie it appears effortless.

A couple of very minor quibbles:
- India Habitat Centre appears to have been passed off as Delhi University
- Saffron party workers attacking peaceful demonstrators at India Gate? In the age of 24 hour television, sending a martyr’s mother into a coma would be an absolute PR disaster !
- Sue is shooting an entire historical documentary with a single camera and no back up unit? Chalo maaf kiya – creative license!

There is a lot more I would like to write about the film but shall wait until more of us have seen it!

I would give Rang De Basanti a 5 star rating for its thought, its passion, its careful crafting and overall entertainment value. Go see it as soon as you can beg, borrow or steal tickets!

Also read: the official JAM review by Krishna Rao, here
Posted by Rashmi Bansal at 2:49:00 AM