Want to be a 'creative commando'? 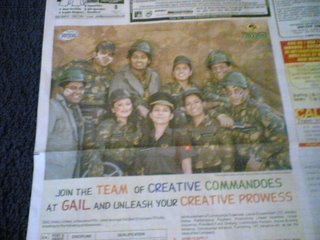 This is a recruitment ad published today in DNA.. At first glance, it appears to be an ad for the armed forces.

But then the headline says join the team of "creative commandoes" at GAIL and unleash your creative prowess.

GAIL - as in "Gas Authority of India"? GAIL and creative prowess?? The company is seeking executive trainees in the field of corporate communications with a 2 year full-time diploma in Mass Comm/ Advertising or PR.

The recruitment ad takes up 70% of the page and the headline tries to convince the prospective candidate it's a really 'creative job'. But, the entire copy reads like a typical old-school government job advertisement.

The payscale, age limit, company benefits - OK, those are relevant information. But under "how to apply" there's a long list of 11 points including please send "mailing address with pin code; tel nos with STD codes".

It's a step-by-step guide on how to write a resume! Considering the profile of candidates they're recruiting, is that really necessary?

There is no job description whatsoever. Or indication of how the candidate, if selected, will be allowed to unleash their 'creative prowess'. Unless you count the 'creative commando' photo, which I would not count as a good example of creativity!

What's more, a 9 pt caption notes that the people posing in the pic are 'the creative team at GAIL led by DGM (Corporate Communications). Why the mention of DGM? Because, it's a government organisation after all. A bit of fancy dress and war paint doesn't change that...

I wonder how effective this ad will be. And why companies go to such lengths to produce 'cool sounding' recruitment advertising. A job is a serious matter. Tell me what the job is. Not just how much fun it's going to be.

And never be creative for the sake of being creative, especially if it's for a 'creative' position.
Posted by Rashmi Bansal at 6:36:00 PM