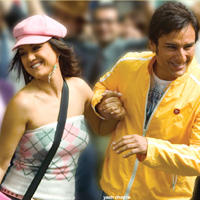 Pregnant women are crazy women is what most men are gonna conclude after watching Preity Zinta in Salaam Namaste. Will I be running around the countryside at midnight - with a wife whose bump is the size of a baby asteroid - in search of Ben & Jerry's Dark Belgian Chocolate icecream? Or Haldiram's dahi papri chaat, or whatever else mere bachche ki maa craves at the moment??

Well, I guess it happens to some - but not everybody. I can't remember having any particular food fetishes when I was pregnant. I just ate a lot more of everything than I should have, then took two whole years to shed the resulting flab. Unlike Preity, who just coolly disengaged the asteroid from her regular tummy and went back to her normal sexy self.

But yes, I guess pregnant women are a special breed who need to use the loo way too often. They laugh, and cry, for no reason at all - thanks to the hormones surging through their system. It's no cake walk, for sure and I'm wondering what is this filmi fascination with having a baby - whether it makes sense for the mother or not?

You can argue the baby is a 'life' from the time of conception or argue otherwise. Salaam Namaste is a movie, so we know Saif and Preity will get together in the end. Otherwise? How was Preity planning to support the baby??

I for one am firmly on the side of women having the right to abortion. It's no big deal in India, of course. Ads for "Pearl Centre" abound in local trains - offering to do the job for as little as Rs 100. Prevention is always better than abortion but abortion is better than bringing an unwanted life into this world.

Why it makes sense
Steven Levitt of 'Freakonomics' fame has explained the drop in US crime rates over the last 10 years by linking it with the historic Roe vs Wade judgement in 1973, which legalised abortion in that country. His argument - supported by intuition and then statistics - is that the drop came about because a large number of unwanted babies (of poor, young, black mothers) were never born. And hence a whole generation of potential criminals never came into existence.

Not everyone agrees with the argument but, anticipating the emotions his theory would arouse, Levitt points out that "economics is about what is true, not what ought to be true".

Kya kehna
And here I have my own strange little experience to recount. Six - well almost seven years ago - home pregnancy kits were not easily available. Jab mujhe laga kuh gadbad hai, I decided to visit a gynaec. She gave me a urine test and a few minutes later pronounced, "Congratulations".

Then, she added, "Aage kya karna hai?" I was a bit perpelexed but then it dawned on me what she was alluding to. I'd come for the test alone - no mother, mother in law or husband in tow (dunno what he was busy with that day but well, he wasn't with me!).

Then she scanned me for signs of 'marriage' - no mangalsutra, no sindoor, jeans and t shirt. And put me down in the 'unwed mother' category.

Well, I clarified things and we fixed the next appointment. But looking back I think she was pretty cool, practical and non-moralistic about the whole thing. No allusions to paap or lectures on sin.

And no, seeing a sonograph of a baby would not be cho-chweet enough to move me - or most Indian women - to keep a baby conceived outside marriage. That's just plain stupid - and unfair - for both mother and baby. Better think a million times before you welcome into this world a baby, whether with a salaam or a namaste!
Posted by Rashmi Bansal at 6:26:00 PM