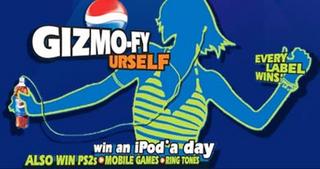 Pepsi has hitched its brand to the 'gizmofy yourself' bandwagon. Their new sales promo features advertising on FM radio that goes something like this:

I am sure some complex research would have thrown up that technology is the coolest thing going for teens. Especially boys.

The promo asks you to peel off the wrapper from the PET bottle and sms the number printed there to a short code service like 8243. Everyone gets free wallpapers and ringtones (I'm guessing 'Oye Bubbly' and Pepsi theme wallpapers). Once you collect 100 points you get to download mobile games ; the lucky ones may win iPods, PS2s and so on.

That's what I call 'piggyback marketing'. Instead of these gizmo wallahs having to spend money on developing the market, megabrands seeking to associate themselves with what's cool' are doing the job for them!

Good buy
I am in fact amazed at the number of companies giving away free iPods - there's McDonalds and the newspaper DNA I can recall offhand but there are more. On the other hand, I dropped by at 'Vijay Sales' - one of the largest electronics retailers in the city (housed in a 4 storey building opposite Siddhi Vinayak temple) and they were 'out' of iPods.

Is it selling like hotcakes? Or is Vijay Sales just too busy selling 'white goods' - TVs, fridges and microwaves - to the Great Indian Upper Middle Class?

Frankly, their range of gizmos is woeful - abt 15 models of digicams and handycams, two dozen mobile phones, a dozen MP3 players. None of the buzz you get when you go to Singapore or Tokyo or even Malaysia where electronic outlets offer you a veritable feast of goodies. In everywhich colour, shape, style and known/ unknown brand.

In digicams for instance Vijay Sales does not even stock brands such as Fuji and Nikon. Only Canon, Kodak and Samsung - with a single model of Sony thrown in for good effect. It's like going to a saree shop where you have maal in just 5 prints and 6 colours!

The grey market remains far more exciting to buy from (the dealers there may not wear ties but they know their stuff inside out and have a far wider range).

Guess it will take a few years before we as a country are well and truly gizmofied as far as real world retailing goes. Meanwhile gizmo-lovers are busy shopping for bargains online.

According to a survey done by Internet and Mobile Association of India (IAMAI) 74% of those who bought gadgets online were between 18 and 35 years. The biggest buyers were in the 26-35 age groups which accounted for 48 per cent of buys.

Clearly these are the folks stuck to their office computers for the most part of the day. The kind of folks who may never have gone out into the real world to shop in the first place!

Technology products like laptops, MP3 players, mobile phones, digital cameras and pen drives are very popular with online shoppers primarily because of multiple promotions via multiple sellers offering similar products. This enables buyers to comparison-shop and get the best product at the least price.

Internet ki jai ho! Now stop goofing and get back to work.
Posted by Rashmi Bansal at 10:23:00 PM