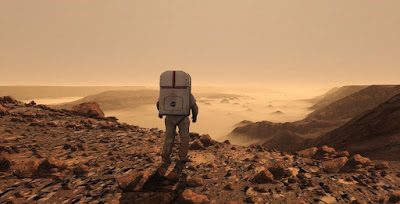 In 2016, Mark Watney (Matt Damon) is marooned on the red planet in the Hollywood sci-fi adventure titled ‘The Martian’. There are two possible versions of the future. Version 1.1 – when food and oxygen run out in 212 sols (Martian days) Shri Watney will die. But that’s not the version he chooses to believe.

Mark Watney is an eternal optimist and a ‘take that! Neil Armstrong’ kind of guy.
He says to his webcam, “Maybe I will die, but I not without putting up a fight.” Thus with nothing but his own wits, willpower and determination he figures out a bunch of things nobody has ever done before.

He starts growing food, finds a way to communicate with NASA and stays sane without any human support or company. But it struck me that the stuff Mark Watney did on planet Mars is quite similar to what any entrepreneur must do right here on planet Earth.

When you start a company, you have no company. You are marooned on a planet called ‘My Big Idea’. There is very limited oxygen (read: funding) and even less food (read: paying customers). What sustains the entrepreneur is the will to survive.

On planet Mars, Mark Watney discovers that even his own shit serves some purpose. He uses it to make the red soil fertile and plant potato seeds. When, after many weeks, he sees the first green shoots appear, Watney is thrilled to bits. In India, we call this method ‘jugaad’.

‘The Martian’ is extreme jugaad. Watney is a botanist by training, yet he must now be physicist, chemist and rocket scientist rolled into one. Our astronaut can get some ‘mentorship’ from experts on earth but kaam to usey khud hi karna padega.

But none of this would have been possible if Watney had broken down. Kaise hoga? Nahin hoga blah blah blah blah. The biggest challenge an entrepreneur faces is not in the external environment but within himself. So forget about the ‘ecosystem’, first work on apne andar ka shaitan.

Unlike Mars, this planet offers many escape routes. Cut off those options. Unless you are as desperate as Watney, you won’t be able to look at your own shit and create life from it.

Robinson Crusoe did it 300 years ago on a desert island. Mark Watney did it on a different planet. We can take inspiration from their stories and write our own stories. There is no dearth of ‘planets’ to colonise. Look up in the sky and find the one that speaks to your heart.