Dr Avinash Saoji completed his MBBS from Government Medical College, Nagpur. Being the college topper he could easily have done a PG but decided then and there that he would not study further. The purpose of his life was not to establish a flourishing medical practice but to be of service to society. 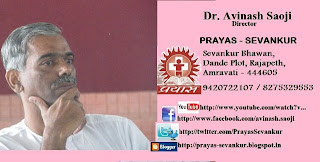 I understood the impact of his work when I arrived at Anandwan on the 22nd of February for the annual Sevankur Youth Motivation camp. For the past couple of years Dr Saoji had been inviting me to attend his camps – in Wardha, in Amravati and so on. Each time due to some or the other commitment, I would politely decline.

To tell you the truth I wasn’t very excited about visiting these somewhat remote parts of Maharashtra.

But Dr Saoji’s gentle persistence paid off. A week before the annual camp I decided to make time and effort – to go and see what Sevankur was all about. I was also keen to visit Anandwan, as I knew of Baba Amte’s pioneering work with leprosy patients. Kuch acchha kaam dekhne ko milega, I thought.

I had no idea though, how amazing – and uplifting - this trip would turn out.

Warora is two hour drive from Nagpur, on a silky-smooth highway. A small signboard points you in the direction of Anandwan. (http://anandwan.in). Nothing had prepared me for the scale of the ashram. (It’s actually more of a ‘township’ spread over 200 hectares where a few hundred people live and work!)

At the ‘Mahamantri hall’ – a giant shed-like structure - I was greeted by Dr Saoji. He was dressed in his trademark white banian and white cotton half-pants (Baba Amte also preferred such clothing – it is ideally suited for the local weather). 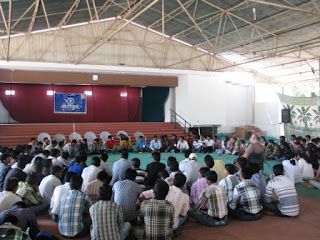 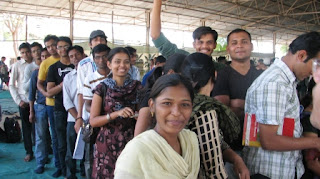 Over 300 students from 30 districts of Maharashtra had gathered by early afternoon. As they introduced themselves one by one it was clear that a majority (around 70%) were from the engineering stream. Medical was the next distinct group (10%) followed by Agriculture, Arts, Science and Commerce.

However they were united by one common objective: to know what is ‘social service’ all about.

The camp was basically organized around a series of ‘sharing’ sessions. The first such session was with Adhik Kadam of ‘Borderless World Foundation'. Adhik is originally from Pune but has spent the last 16 years of his life in Kashmir, where he has set up 4 homes for orphan girls.

He described his journey from ‘fear to fearlessness.’ It started with the curiosity to know what is Kashmir, why does it enjoy special status under the Constitution. 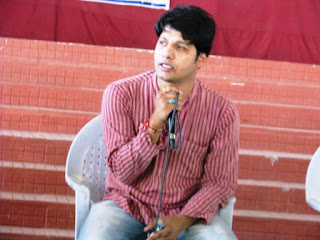 “I went for 2 weeks after my 12th standard exams and stayed on for 3 months.”

Kashmir brought Adhik face to face with the best and worst of humanity. A particular incident which impacted him hugely was watching a truck enter an army camp. He noted a young boy of 16 or 17 dressed in army fatigues mismatched with sports shoes. Seconds later there was a blast.

A piece of human flesh came crashing down on the windscreen of Adhik’s car. The boy was a fidayeen (human bomb).

The incident shook Adhik to the core.

Being a Hindu Adhik was looked at with suspicion. Some maulvis issued a fatwaagainst him. But he persisted in his humanitarian work.

A day came when an AK 47 rifle was pressed against his head. When it might well have been ‘the end’.

But he conversed with the terrorist who held the AK 47. And at the end of 15 minutes the man let him go with these words,“Aap khuda ka kaam kar rahe hain… Aapko jo marega woh sachcha Musalmaan nahi hai.”

Adhik summed up his life as a ‘spiritual journey’ in which apna astitva maine kho diya hai.

Service is about dissolution of the ego state, of being one with the entire world.

The second session by Yajuvendra Mahajan of Deepsthamb foundation which works with rural and semi-urban youth in and around Jalgaon. Teacher training, career counseling, and coaching for competitive examsare its main activities (over 500 candidates have successfully cleared class 1 and class 2 officer jobs in MPSC through Deepsthamb’s efforts).

Yajuvendra is a gifted speaker who exactly knows how to catch the pulse of the audience. He made them laugh, but at the same time made them think. About their own dreams and about the limits they have acceptd to those dreams, by following what the society wants.

“Hamara samaaj ek nautanki samaaj hai,” was his tongue in cheek observation. “The moment I say mee gram sevak the girl’s father will say “wah wah” but my daughter just got engaged.”

Yajuvendra left the students charged up to think beyond a steady job, movies on weekends, house, car and whatnot.

At the end of the session I realised I have been listening to Marathi continuously for 4-5 hours and was enjoying the flow of the language. I am not fluent in speaking but could easily follow most of what was being said.

Dinner, like lunch, was simple dal-chawal-roti-sabzi but satisfying. A cool breeze started blowing as I dropped off to sleep in the dormitory-style guesthouse.

The next morning I woke up early and took a walk around the campus. At 630 am, the place was alive and humming. Men and women were busy sweeping away fallen leaves on the pathways. Children were already dressed and ready for school. 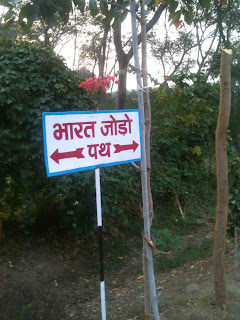 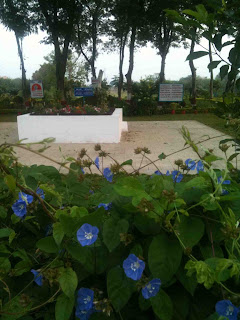 I walked past signs like ‘More Crop per Drop’, down ‘Bharat Jodo’ path to Shraddhawan – the Samadhi spot of Baba Amte and his wife Sadhanatai. It is a beautiful, peaceful spot covered with fresh flowers, standing under this quotation by William Blake:

Baba Amte passed away in 2008, at age 93. Over 57 years, he built Anandwan – an oasis of cure and compassion for those ostracised not only by society but their own families. Leprosy was not a disease, it was considered to be a punishment for sins committed in a previous life. 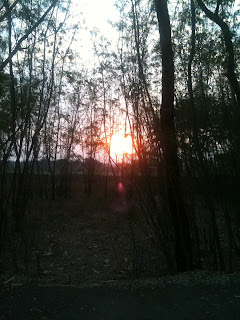 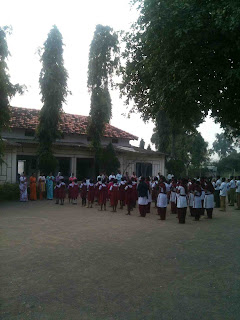 As I watched the sun rising from between the trees, I felt completely at peace. With the leaves. The bushes. The chirping of birds.

As I ambled back I passed the deaf-mute and blind school, where children were neatly assembled for the morning prayer. It was just 7.15 am.

Over breakfast I met Rakhi Patil, a sarpanch of Khadkesim village near Jalgaon. A college lecturer by profession and wife of a Congress party worker she was quite matter of fact that she got this opportunity because of mahila aarakshan.

Rakhiji talked enthusiastically of the many changes she is trying to bring about. The main problem being illiteracy and andhvishwaas. The main problem, she says, is that people want government to give them handouts, instead of doing anything for themselves. Even for the Aadhaar card, people have to be coaxed and convinced and helped with the actual process. 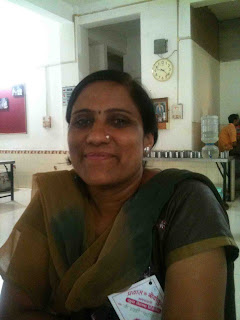 As she spoke about various programs – like daarubandi and police intervention to prevent underage marriage - I felt for the first time that reservation for women is a good idea. This lady would never have got a chance without reservation. But given the opportunity she is doing a lot more than a man would.

“It took more than a year for people to accept me,” she says matter of factly. Equations of caste and gender are not easy to rewrite but sincerity and stubbornness ultimately pays.

That’s the story of Dr Sangram Patil and Dr Nupur Patil as well. Both highly qualified doctors from BJ Medical college with post-graduate degrees from London, the Patils returned to India 4 years ago and set up a practice at Erandwan near Jalgaon.

“Our son was born in UK, had we stayed one more year we would have got British citizenship but we took a decision to come back. We did not want to become British doctors working in India but remain Indian and work in India, where aamhi garaz aahe (where we are needed). 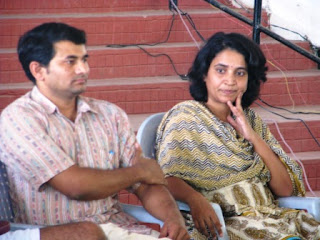 However the punchline of the Sangram-Nupur story was not professional but personal. The two met in medical college, where Sangram proposed to Nupur at the end of the first year but was flatly rejected. The reason being that they came from different castes.

Sangram persisted, Nupur resisted. But then, after a year of saying no, no and no, she melted. Now the problem came from Sangram’s family – prachand virodh. Nupur being not just from a different caste but a scheduled caste, and a practicing Buddhist.

Sangram and Nupur decided to have a (secret) registered marriage in the presence of friends. On the day that his sister got married, Sangram took his jijaji aside and explained the situation to him. All hell broke loose and the young couple – still studying for their degrees – was left to fend for themselves.

I often read in newspapers about such issues but hearing it from the horse’s mouth was different. To see this young couple bonded by love as well a greater common purpose was inspiring and gave me hope. That things can change.

My own session was also well-received. I spoke in Hindi, the audience was attentive and asked a lot of questions. All had heard of my books though only a few had read them. 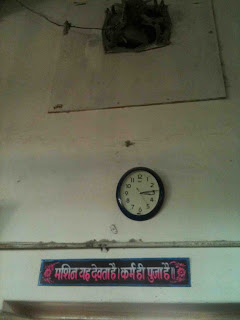 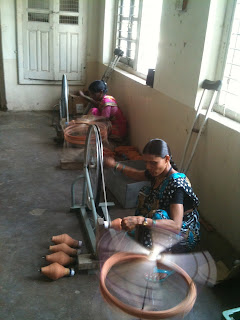 In the afternoon, we had a short tour of Anandwan. Through the many workshops which keep residents busy – making cloth, leather shoes, foam bags and hand-cranked wheelchairs for the handicapped.

‘Shram hi Shriram hai’ was Baba Amte’s slogan. Whether you are handicapped or deaf or blind, you can contribute and earn your living – and self-respect. That was the message of the Anandwan Orchestra, a unique experiment started in 2002 by Dr Vikas Amte. Every member of this orchestra is ‘lacking’ in some sense but united by the language of music. 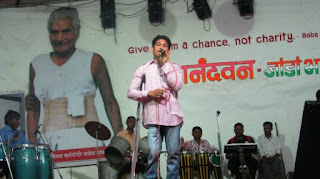 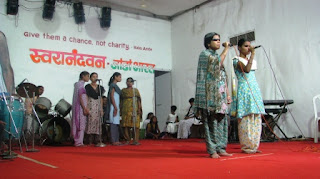 The one hour program they put up was exhilarating to the extreme. (The Anandwan orchestra tours around the country and I do wish that college festival organisers take note and invite them. You must experience the show once! Plus, the fee you pay funds several good causes.)

It was time to leave. I said goodbye to the many interesting characters I had met. From Santosh – the lad from Beed who has taken 44 orphans under his wing to Devendra – who is training the youth of Gondia to get jobs at CCD and McDonalds in Pune.

As I waited for the ST bus on the highway, there was thunder and lightning in the air. But the rain started only after I was safely in the vehicle. There was no seat vacant but the conductor was kind enough to offer his own.

I thought – these are the blessings of Baba. I was meant to come here not just to share and to contribute to these young people. But to understand what the ‘real India’ is all about.

Baba Amte’s story is magnificent and many books have been written about him (esp. in Marathi). But our present-day English speaking urban population does not know about him or the work which is still continuing - at Anandwan, at Hemalkasa and Somnath.

I would like to help in spreading his life's work and his vichaardhaara in some small way.

At the same time, these young boys and girls I met - and thousands like them out there – need inspiration. Stories of sons and daughters of the soil, from vernacular schools and regional colleges but who dreamt big for themselves and for others.

I thought – I must look into writing such a book - in Marathi, for Marathi youth.

I cannot do it alone. I need the help of many of you out there:
1) To refer such stories, from all over the state.
2) A Marathi tutor and/or a Rapidex-style home-study course.
3) Transcription + translation of interviews in Marathi.

If you are interested in any of the above drop me a line at rashmi_b AT yahoo.com