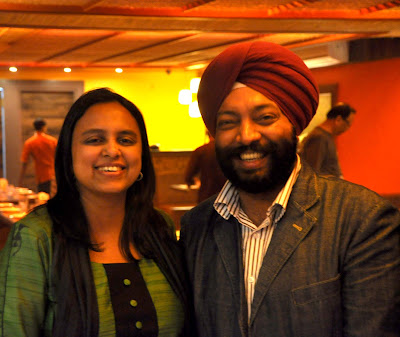 Harpal Singh Sokhi is one such.

When he was first introduced to me, I had no idea who he was. Except that he is a chef who’s worked with Sanjeev Kapoor, now opening his own chain of restaurants.

It was only when the food started arriving on the table that I realised yahan kuch alag funda hai. First came the lassi in cutting chai style. Four different kinds.

Then, the starters. Kya gazab! Not the usual paneer tikkas and hariyali kebabs but some amazing variations. Like 'beetroot and amla'.

Harpal Singh Sokhi is a celebrity chef, but the nicest possible kind.
He is popularly known as the ‘namak shamak’ chef because that’s the trademark phrase on his cooking show ‘Turban Tadka’.

It’s something he chose – deliberately and intelligently. In a world where chefs talk in terms of teaspoons, he picks up a chutki (fingerful) of salt and sprinkles it on his cooking – just like your mother does.

Endearing him to aunties and beejis and didis of all varieties.

“I always look at what is the season, what are the vegetables available in that season. And I plan what to air on my show, accordingly.”

No exotic, hard-to-find ingredients. No Masterchef pretensions. Only an incredible love and understanding of food.

“I have an ayurvedic doctor who is my consultant, he has helped me to create a Punjabi food menu which is lighter on the stomach, easier to digest.”

Is such a thing possible?

Harpal elaborates,”See, if we cook in white butter (butter without salt), that is better for digestion. Adding black pepper also makes a difference.”

Harpal has been in the hospitality business for over two decades. And he has a really sad but funny story to tell about what happened when he decided to take up cooking – as a career.

“I grew up in Kharagpur, where there is only one ambition of every parent – my child should join IIT.”

The second best option was to become an Air Force pilot.

The last (respectable) option – join the Indian Railways (Kharagpur’s only other claim to fame being its endlessly long platform).

Since Harpal showed very little interest in studies, all the above options were ruled out. His father thought a clerical option in a bank might be worth a shot.

“I was sent for typing classes in the middle of the afternoon,” he laughs. “Yes, I can type really really fast even today.”

One of Harpal’s seniors had joined a hotel management course and started working at Sinclair’s hotel in Darjeeling. When he came home for vacation – smartly dressed in suit and tie – Harpal was impressed.

And he too joined IHM Bhubaneshwar.

“If I tell you will get mad,” replied Harpal.

Papaji was mad and stayed that way for a long time. Over time, he accepted that this work is like any other work – pays well and worth doing. But it was seeing his son on television that really made him proud.

In his 20 odd years as a ‘diplomewala bawarchi’ Harpal has seen it and done it all. Travelled and worked around the world, collected the oddest of experiences.

“People abroad are fascinated by my turban. There was one restaurant in Luxembourg where I worked. Guests would come into the kitchen to touch me and see if I am ‘real’.” 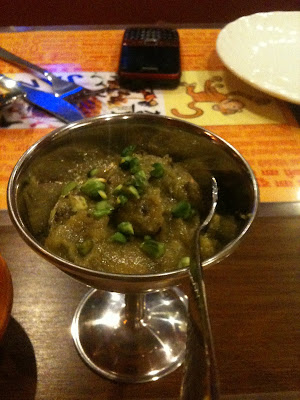 The starters at ‘The Funjabi Tadka’ were so good we never got to the main course. We only had space for some home-style khichdi. And of course, dessert.

What I liked best were the chocolate-mango lassi, the Lahori aloo and the ‘Mirchi ka halwa’ (yes, you read that right and it’s amazing! (pictured alongside)

But the entire menu is full of such interesting things (familiar and yet different). What’s more they have a separate menu for vegetarians which I think is a wonderful insight into the mind of us shakaharis..

It was a pleasure to meet Harpal and share this meal. I can tell that this restaurant is going to be a huge success. Because it’s all about the food, the food and the food.

'The Funjabi Tadka’ (TFT) opened in Kolkata on Southern Avenue on 19th of Jan. Will open in Mumbai (Bandra) and very soon in other locations across India. www.facebook.com/funjabitadka 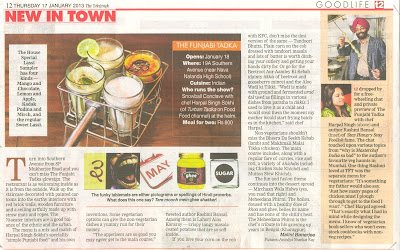 The meal I had was a preview, arranged for by my friend Aneeta Arora. Many thanks to Satyaki Mukherjee, business brain behind TFT. Coverage by The Telegraph newspaper on the 17th of January featured above.

Hotel management was not so well accepted as a career around 20 years ago, but that’s changed.

Not to forget that if you graduate from a hotel school your entrepreneurship skills are at their best. Because the first thing in the mind of a person just about graduating is ‘I will have my own restaurant someday’.

The secret of success in any field is to work hard. Though many complete the course, later they change their profession as it involves long hours of work.

You need to fall in love with your profession to become successful.

In hotel management one has to reach out to people as it is service oriented. You need to make your presence felt in everything you do. You cannot sit behind and wait for things to happen.

As a chef, apart from cooking good food, I always reach out to the guests and talk to them, get to know them, their likes and dislikes. This helped me when I did my shows too. So I strongly advise everyone who intends taking up the course should be an extrovert – friendly and approachable.