My daughter was two years old when she pointed to a glowsign and said, “Barista”.

By the time she was four, there was the shiny new Center One mall next door.

‘Outings’ followed a predictable routine: an hour in the kiddie play area, some ogling at the new Barbie collection and finally, a treat at McDonald’s or Pizza Hut.

More retail madness followed and today, there are five malls in and around our home (although two of them can be classified as doob chuke like the 'Titanic' )

At age 12, going to the mall is no longer a very exciting activity. Unless it’s an unsupervised outing, with friends.

So, on the second day of this New Year, I decided to initiate her into an age-old Indian tradition – the art of picking up raste ka maal.

“Wow, this is great!” she grinned from ear to ear. “At In Orbit we would have got like, one or maybe two tops, that’s all.” 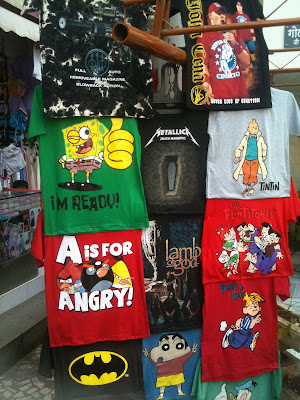 The highlight of her day was the Angry Birds t-shirt. They’re the new rage and of course, ‘Made in Thailand’. But not (yet) as cheap or as common as ‘Being Human’.

Another brand which is not yet available in India, but is selling at Hill Road is the funky Spanish label ‘Desigual’. This stock is export-reject maal from factories in Tirupur which is great. That’s how bazaars like Fashion Street sprung up in India, in the first place.

The only problem is, the really cool stuff is no longer selling either at Fashion Street, or Hill Road. To buy that, you gotta be in Goa, or Hampi, or any other backpacker paradise.

There is an entire store full of amazing Desigual merchandise in McLeodganj, run by a charming Kashmiri guy.

“I have special contacts with their suppliers in India,” he whispers.

God bless you, but please, ask them to send some maal to Mumbai also.

Real fashion is on the street, and from the street. A generation over-fed on malls and brands will turn to these streets to rediscover what it means to create a wardrobe.

And not just buy one with daddy’s credit card.
Posted by Rashmi Bansal at 12:52:00 AM