Start of the month: Godparents.in

A few days ago I invited nominations for 'Start up of the Month' on my facebook fan page. The idea being to give some exposure to young entrepreneurs and for me to learn something in the process, as well.

Well, I received 18 entries in all - amazing work being done by an amazing group of people. With help from my virtual assistant Tabish Azeem I shortlisted 5 start-ups. The criteria used was: Uniqueness & relevance (10), Execution (10), Revenue generation (10) and X factor (10).

The start-up which received the highest score - of 37 out of 40 - was Godparents.in. And here is why: 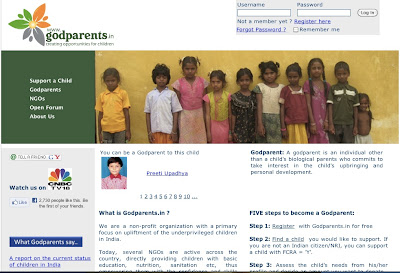 Entrepreneurship is not always about creating a radical new concept. It could be about taking an existing idea and executing it in a better way.

That is whatGodparents is doing. There are many NGOs connecting donors with those in need, CRY and Helpage have been pioneers in this field. But Godparents addresses the idea in a new and interesting way.

A Better Product
Like GiveIndia (which I covered in Stay Hungry Stay Foolish), Godparents is an online system connecting people like you and me with those in need. But, Godparents goes a step further in making me want to give to that needy person.
By giving him or her a name, a face and a background story,

Ranjith G is 10 years old and lives in Kerala. He is a student in 4th class hailing from backward tribal community. His father isdisabled and hence the mother looks after the family with her meager income (Rs 7000 or so a year). He studies well and stands as first in the class. Also good in sports activities.

Ranjith requires Rs 12,000 a year to continue in school and also for basic food and medical expenses.

6 donors have already contributed Rs 8750 for Ranjith. Their profiles also appear below his name. Yes, donors also get a profile page which displays the names of their godchildren and the amount donated to support each one.

I think connecting people on both sides of the giving rainbow is a beautiful idea. It's apt use of technology to increase the emotional bar and hence raise more money, from the haves for the have-nots.

While GiveIndia also uses this idea it only displays the cause, not the actual person you will be helping. GiveIndia does send you a feedback report detailing name and photo of the person your money went to, and its impact. But that may take a couple of weeks or months.

With Godparents, the feel good factor is more real and immediate.

Effective Promotion
There is also a very well made video on the homepage which is a collection of responses of people to the question: “What would you do if I gave you 500 bucks?”

It’s clear that for people like you and me Rs 500 has very little value but for a poor person it can make all the difference. And this point is put across very beautifully.

Godparents has also come up with a novel way to promote itself – by inserting bookmarks in books delivered by Flipkart.

Clear Communication
The main homepage of Godparents very simple and effective. It explains everything you need to know upfront – what is the site all about and how does it work.

The fact that your donation is eligible for tax exemption under Sec 80 G is also prominently displayed. )Many first time donors don’t know that and many NGOs don’t really educate them about it).

Credibility & Commitment
I also like the fact that the site displays the amount raised so far:
The total amount of donations is a little over Rs 18 lakhs. 1022 donations have created 305 fully supported children and 456 'godparents'.

It is rare to see this kind of transparency from any social organization!

The other interesting fact about Godparents is that the entire team appears to be running the service as a social activity, while working elsewhere.

Shubham Srivatsava (BITS Pilani 2009) and Shivam Srivastava (IIT Kanpur) are the co-founders, the rest of the team is also mainly BTech grads working in MNCs or doing their PhDs abroad.

According to an interview given to CNBC Young Turks given in Oct 2009, two months after setting up, Shivam got this idea after reading Nandan Nilekani’s ‘Imagining India’. A book which suggested that technology could be used to solve large no of problems in India,

With Rs 1 lakh investment, Shubham and Shivam, along with a team of friends and wellwishers made a small start. The toughest part was convincing NGOs to participate, and on the other side, giving donors the confidence in these NGOs. For this, Godparents has evolved its own due diligence/ credibility criteria.

In conclusion
The voluntary nature of this enterprise is its greatest strength and also its major weakness. Since everyone appears to have a day job, there is no pressure of cost on the start-up.

But to take the idea to the next level, one of the founders or team members will need to devote full time attention to it.

I wish Godparents.in all the very best. God bless and may many more feel a tug in your heart and the desire to contribute through them. To make a difference.

P.S. I will exchange notes with the co-founders and update this post with additional inputs. But that will take a couple of days.

P.P.S. Many of the other start-ups are also very interesting... lagey raho bhaiyon aur behnon. You may very well make it to this space next month :) I will shortly be inviting nominations for the Start up of the Month, for October.
Posted by Rashmi Bansal at 4:05:00 PM