Making a difference - I (Teach for India)

Well, that is true and yet not entirely so. Because there *is* a small new breed of young people trying to make a difference. And a bunch of organisations enabling them to do so. Here are some which I think are doing wonderful things, and who knows, you may like to explore the doors that can be opened.

Let me start with Teach for India. This is a unique program where graduates and young professionals pledge 2 years of their lives to working as teachers in municipal schools. The idea is that these two years of 'giving back' and of understanding India from ground zero will make you socially senstitive.

You will go back to the mainstream - join the corporate world most likely. But, you will be inspired to be a true leader. It's a powerful idea and in the last 2 years the program has attracted some amazing talent.

As I realised, while speaking to Teach for India fellow Srini Swaminathan. Srini is a BITS Pilani graduate who worked with Schlumberger for 8 years. A job most would die for.

But, last year he decided it was time to stop thinking and start doing something. "I used to donate money online and all that but I wanted to do something more, to really make a difference," he says. The fact that he too comes from a low income background was a motivating factor, to give back something to kids out there who have nothing in life today. 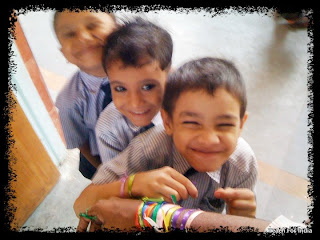 Srini is now teaching second standard children at the municipal school in Dharavi Transit Camp. "We have a pucca school building," he says. "But not much else!" So Srini has to be creative. Everything from an empty cornflakes carton to used birthday hats, he says are welcome because they help stimulate thinking and creativity in class.

In June 2010 when Srini joined there was a comical situation where he spoke very little Hindi and the kids spoke very little English. Six months later, he says, he has picked up enough Hindi to get by. But more importantly, kids are speaking English.

These are just a couple of small indicators, you can read about Srini's experiences, in his own words, on his blog or Facebook page.

There are over 100 TFI fellows like Srini out there, doing similar transformational work. And mind you, getting transformed in the process as well.

If you would like to apply for Teach for India 2011 fellowships, today (Jan 23) is the last day for applications. In any case you may like to keep it in mind as something to try for next year.

Incidentally, TFI fellows are paid a stipend of Rs 15,000 per month, but as the Mastercard ad goes, it's an experience that's priceless.
Posted by Rashmi Bansal at 4:31:00 PM